A great deal has transpired in the 10 years between Rhiannon Giddens, Dom Flemons and Justin Robinson connecting at North Carolina's Black Banjo Gathering and the release of Giddens' brilliant debut solo album, "Tomorrow is My Turn." 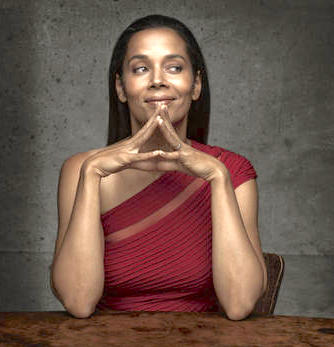 CCD made an indelible impression with their first two albums, 2006's "Dona Got a Ramblin' Mind" and 2008's "Heritage," but their next 2, 2010's Grammy-winning "Genuine Negro Jig" and 2012's "Leaving Eden," both topped Billboard's Bluegrass chart and reached the Top 10 of the Folk chart. Since 2010, the Drops have added several new members; Robinson and Flemons dropped out to pursue outside and solo projects.

As the sole remaining original member, Giddens might well have been content to maintain the Carolina Chocolate Drops' trajectory without ever stepping out from under the group umbrella, but a fateful call in 2013 from artist/producer T Bone Burnett completely reordered her universe.

Burnett had just produced the music for the film "Inside Llewen Davis," a fictional retelling of the early days of the folk movement in New York City and was assembling a musical cast for a concert at New York's Town Hall to celebrate the film and the era. He had heard Giddens' work with CCD and was extremely interested in securing her services for the concert, which came to include Jack White, Conor Oberst, the Avett Brothers, Elvis Costello, Joan Baez, Marcus Mumford, Patti Smith, Gillian Welch, Dave Rawlings and a host of others.

"Town Hall was the gift that keeps on giving. I had no idea it was going to change my life the way it did," says Giddens from her Atlanta tour stop. "He tapped me to do the show. At that time, the Chocolate Drops was in flux; the new line up had been chosen, but wasn't performing yet, so it made sense to do it solo. And I'd very rarely done solo things so it was nerve wracking, but ultimately great."

Giddens' contributions to the show - Odetta's "Waterboy," a mash-up of two Gaelic ballads, plus joining Welch and actress Carey Mulligan on "Didn't Leave Nobody But the Baby" - were rapturously received by critics and fans alike; she received the only standing ovation that occurred during the actual show. Backstage, Burnett approached Giddens with the idea of doing a solo album, something she had never seriously considered.

"I wasn't thinking about doing a solo record," says Giddens. "I was working on the next Chocolate Drops record."

After piquing Giddens' interest, Burnett revealed another opportunity; the chance to be involved in his "Lost on the River: The New Basement Tapes" project, where musicians from a broad stylistic cross section (ultimately Costello, Jim James of My Morning Jacket, Marcus Mumford, Dawes' Taylor Goldsmith and others) would provide music to unpublished Bob Dylan lyrics.

"That was another mind-blowing, life-changing experience, in an artistic way," says Giddens. "I came with very little prepared because I was looking to learn about songwriting and collaboration. I was definitely the least experienced songwriter. I got a lot of what I came for - a crash course in songwriting and amazing musicianship. I struggled in the middle of it, but it was worth every bead of sweat."

Within a matter of months, the classically-trained Oberlin College graduate who had never entertained the thought of a solo career had recorded "Tomorrow is My Turn," a collection of songs written or recorded by Patsy Cline, Nina Simone, Dolly Parton, Hank Cochran, Jean Ritchie and Elizabeth Cotton, among others. After having been absorbed in the group mindset for so long, Giddens had to reconfigure her thinking to accommodate solo structures and goals.

"There are just some things that are naturally different," Giddens notes. "I'm responsible for the song choices, me and T Bone, and it's not a democratic process. It's what I want to do. That was interesting. It was kind of freeing in a way, I could really just consider what I wanted to say. But it was scary in other ways because it was nobody's ass, but mine. Of course, T Bone was a partner in that, but it was really a conversation between me and him, rather than a producer facilitating a group dynamic."

"Tomorrow is My Turn" exhibits Giddens' musical versatility as she maintains a certain authenticity in her translations of jazz, blues, country and gospel songs from bygone eras while simultaneously investing them with a healthy dose of modern relevance. The title track is a case in point; a song originally performed by Nina Simone, Giddens offers a haunting vocal that is eerily reminiscent of Simone as well as Roberta Flack, while Burnett and the band - which includes members of the Drops, the Punch Brothers, Funk Brothers percussionist Jack Ashford and renowned drummer Jay Bellerose - provide a soundtrack that channels the traditional arrangement with a contemporary shimmer.

"It was totally organic," says Giddens of the way the title track and, by proxy, the rest of the album turned out. "I've immersed myself in music and singing and training since 1995, when I went off to the conservatory. I've been in training in one way or another, whether it was in the conservatory or playing banjo with Joe Thompson or listening to a million things. When I get into the studio, then all that stops at the door and I'm just singing the song however it needs to be sung. If you start thinking, 'I want to do this or that,' it doesn't work. I start getting second-guessy. That's why you work with a really great producer who can come in and say, 'This approach isn't working, we need something different,' so you can get to get in there and do what you do."

A big part of the appeal of "Tomorrow is My Turn" is in Giddens' song selections, a brilliant cross section of avowed classics and incredible obscurities.

"I had this list of songs that I was building that didn't really fit the Chocolate Drops canon, and I was having this notion about women in Americana music," says Giddens. "Plus I was feeling all this coalescing around me, so when T Bone came along and said, 'What do you want to do?,' I said, 'I've got this list of songs. Let's add to it and do it.' It felt organic and the right time."