A couple of years ago, while discussing various musical poet-heroes, singer-songwriter Hayes Carll mused that "in a perfect world, Ray Wylie Hubbard would be winning Grammys." With the release of his latest offering, "The Ruffian's Misfortune," a follow-up to 2012's critically acclaimed, "The Grifter's Hymnal," now might just be the time that Carll was talking about.

In just under 34 minutes, Hubbard takes us on a 10-song musical sightseeing tour of the world as seen from a dimly lit, somewhat left of center viewpoint, seldom seen by mere mortals. Writing or co-writing all 10, complete with talking blackbirds, undertakers dressed like red-eyed crows, stone blind horses, bad-ass blondes, dancing black angels and a myriad of other vivid images throughout, Hubbard takes the listener on a blues romp that that brings to mind a roller coaster that scares you so good you can't wait to ride it again. 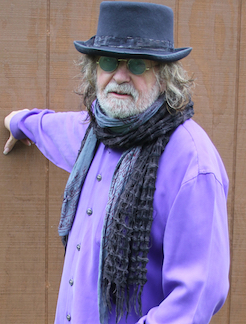 At 68, Hubbard has had a lifetime of experiences that could fill a book, and they soon will, with his autobiography, "A Life... Well, Lived!," due to come out next year. However, Hubbard shows no desire to become a nostalgia act or live in the past. To the contrary, he speaks with the excitement and urgency of an artist who is just hitting his prime or at least relishing an extended creative Renaissance.

On "The Ruffian's Misfortune," Hubbard expands on the themes from "The Grifter's Hymnal." This is his third effort on his own imprint, Bordello Records (distributed through Thirty Tigers), and in his own words, "In the old days, someone used to have to say, yes, before I could make a record. Now, with all the resources available, I don't have to ask permission, really, since I sleep with the label president, my wife, Judy."

"The Ruffian's Misfortune" is not so much an homage to the blues, but the real deal, by someone who actually saw some of the greats perform live. Tips of the hat are all over this record, directly as to Charlie Musslewhite, Jessie Mae Hemphill and ZZ Top's Billy Gibbons or indirectly, as to Pinetop Perkins, Keith Richards and Lightnin' Hopkins. This is raw stuff, cut in one or two takes, with no over-production or auto-tune in sight.

Kicking off with "All Loose Things," a cut that could have been right at home on "The Grifter's Hymnal," Hubbard drops the names of Kevin Welch, Eve and her wayward son, Cain, with equal weight. With an opener like this, there's no mistaking the blues are firmly in hand. With a heavy downbeat up front, a growling, gritty, electric guitar, and Hubbard enthusiastically interpreting his own lyrics, we are at once placed on a spiritual journey of sorts that doesn't let up until the last note of the last song sounds.

"I wanted this album to be stripped down, with an old-style, almost garage band, feel, like in the 1960's when bands like Buffalo Springfield and the Stones were getting it done fast. We recorded this in just a few days. I wanted that Neil Young/Keith Richards type of thing on this one;" says Hubbard, "It just seems to fit the groove that we had going;" when asked about the raw power and vivid scenes that the music and lyrics conjure up here.

That is not to say that Hubbard went completely old school, since there are plenty of musical newcomers and unlikely musical pairings, all over the record. These include the lovely, Austin newcomer, Carson McHone and Hubbard's 21-year-old lead guitarist son, Lucas. While only featured singing backup on two tracks, "Chick Singer, Badass Rocking" and "Barefoot in Heaven," McHone sparkles, sounding alternatively like a younger Lucinda Williams and Dolly Parton.

"She will be big soon." says Hubbard. "I'm happy to have come up in music seeing the musicians I did, that you just can't see any more, like Gram Parsons and working with Willie and Jerry Jeff, and it is fun working with young people like Lucas and Carson and being able to help folks like Sam Riggs and the Night People, too."

Trading tasty guitar licks throughout all of the tracks here, Lucas Hubbard comes of age, swapping leads with Hubbard stalwart, Gabe Rhodes throughout, as his father bridges the time and styles from the heroes of his youth, to his more recent collaborators such as Ronnie Dunn and Marco Gutierrez and Nino Cooper, of Brooks and Dunn and The Dirty River Boys, respectively.

Asked about how his songwriting foray with Ronnie Dunn came about, Hubbard replies, "He called me up one day while I was driving, he got my number from Tony Joe White." He says, "Ray Wylie, this is Ronnie Dunn, from Brooks and Dunn. I wanted to know if you wanted to write together?" I said, "Are you the one with the hat?"

"I felt bad about kidding him, but we wrote three or four pretty good songs I think. We both came from Oklahoma. It was fun putting the line in the chorus, 'I'm an Okie on the road from Tishomingo,' since that was a place we both knew about."

A certain spirituality permeates this record owing in Hubbard's own words, "Not so much to a religious conversion, but to a spiritual optimism or awakening of sorts. The older I get, I sure hope God is grading on a curve."

From the opener, through his surprising collaboration with Dunn, "Bad on Fords" (covered recently by Sammy Hagar), on to "Chick Singer Badass Rockin'" and "Down By the River," his collaboration with Cooper and Gutierrez, Hubbard sings within the pocket driven by George Reiff's bass and Rick Richards' signature drums.

However, it is on the slower offerings when Hubbard's spirituality, poetry and road weary voice come together to raise the hair on your arm. While discussing the perils of living long enough to know the depth of sins, especially your own and realizing that mercy isn't always assured, Hubbard reaches a realm only he and a relative few others inhabit (Kris Kristofferson and Neil Young come to mind), when the quality of voice improves with the beauty of the poetry and the depth of the introspection.

On "Too Young Ripe, Too Young Rotten," the loping, beautiful, "Barefoot in Heaven" and the masterpiece of the album, "Stone Blind Horses," which conjures up both Kristofferson and Young, exemplify this transcendence. Ending the album with the latter, in which he discusses his own mortality and past meanderings, with his old Hohner Echo harp, piano and mandolin rounding out his band in perfect accompaniment, is a stroke of genius for Hubbard.

Whether he ever cuts another blues song again, he can consider this a job well-done. Scratch it off the bucket list. Nothing is ever assured, but Hayes Carll could be onto something. We may never get a perfect world, but a Grammy nod for "The Ruffian's Misfortune" by comparison, doesn't seem far-fetched at all.