Hensley, Ickes get together "Before the Sun Goes Down" – February 2015
COUNTRY STANDARD TIME
HomeNewsInterviewsCD ReleasesCD ReviewsConcertsArtistsArchive☰

Hensley, Ickes get together "Before the Sun Goes Down"

There is no shortage of country and bluegrass artists who can say that they have been performing at high-profile Nashville venues like the Opry, Ryman and Station Inn for more than half their lives, but in the case of singer and guitar virtuoso Trey Hensley, he's still only 23.

After coming under the wing of Marty Stuart (who himself had been introduced to the business at a young age by Lester Flatt), Hensley found himself on the Opry stage at age 12 when Earl Scruggs invited he and Stuart to come out for a couple of numbers. 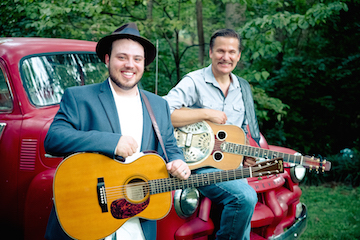 Less than a dozen years later, he's a veteran with seven albums to his name. The latest, "Before The Sun Goes Down" (Compass) is a collaboration with Dobro icon Rob Ickes of Blue Highway fame that winds its way through traditional country, bluegrass and electric roadhouse honky tonk.

"(Rob) was playing Dobro with Earl Scruggs...right after that Earl invited me to sit in on some shows with him anytime he was in East Tennessee. I think the next one was a couple of months after I played the Opry, and I met Rob then. Then I met him a few months after that with Blue Highway."

That led to a guest appearance on last year's Blue Highway release, "The Game."

"I think I opened a show for them when I was 12 or 13, so I've known Rob for a long time, but yeah, with 'The Game,' that was really the first time that I got to hang out with all those guys and get to talk to Rob about music and stuff like that."

The 13 tracks on "Before The Sun Goes Down" go back and forth between acoustic and electric, with Ickes moving to lap steel on several cuts. It takes, Hensley says, a little bit of adjustment to switch gears like that, whether on stage or in the studio.

"It's kind of a leap in a lot of ways, and I've kind of had to work on that a lot because they're just two completely different animals. I forget who it was (that) likened playing the acoustic guitar to using a handsaw and playing an electric to using a chainsaw. It's just completely different things. My approach to it is also completely different. It takes a little bit, maybe through that first song...if we're playing electric, to switch back into that mode, but now it's just a whole lot easier than maybe it was before when I was just doing primarily acoustic shows or primarily electric shows...it's just made it easier to adjust on the fly. But yeah, it is a pretty difficult task to get into the different modes. The 'feel and touch' is completely different."

Hensley is quick to say that he and Ickes are not just studio partners, they've been lining up gigs all over. When in Nashville, they have the luxury of a band that includes Aubrey Haynie on fiddle, Mike Bub on bass, and jazz drummer John Alvey. On the road, though, it's just the two of them, and he finds both experiences rewarding.

"Half of each set will be acoustic, and we'll switch over to electric, and Rob will play lap steel. But then when we're traveling it's just me and Rob in the shows, and yeah, we've been doing this duo thing that's been really working out great. We did our first run of shows out west as just a duo back in December, and we played for a couple weeks every single night out in California and really had just an incredible time and got to work on our 'duo' show. And it's a lot of fun to be able to the shows that just Rob and I do."

As instrumentally spectacular as they are, be it acoustic or electric, the aspect of the partnership that has drawn a lot of attention and comment is Hensley's deep, soulful baritone that invites comparisons to Merle Haggard, and as a quote in the liner notes testifies, Hag counts himself a fan.

"Merle, he is my all-time favorite...he is just the top, the pinnacle of music for me, everything that he's recorded. He's always been one of those guys that I've listened to and just aspired to sing and write and play like Merle, and so it's very cool, it's a highlight of my life gettin' to read a quote from Merle Haggard about the album."

The disc contains three Haggard covers ("I'd Rather Be Gone," "Workin' Man Can't Get Nowhere Today" and "When My Last Song Is Sung"), and while "My Way Is The Highway" is an original, Hensley concedes that he has a ways to go before his writing skills start catching up.

"I've written maybe 20 songs, something like that, total, but I'm trying to write more. Hopefully on this next album, where Rob and I are going to be working on another one soon, hopefully on this next one it will have some more original stuff mixed in with the cover tunes. But, you know, I'm just trying to get into the writing aspect of it. I love it, but I just haven't done a lot of it. I pick up a guitar to try to write," he laughs, "and I end up sitting down with a record and trying to learn more licks or something."

As a picker, Hensley quickly rattles off a list of influences – Doc Watson, Clarence White, Bryan Sutton, Tony Rice – and notes that, although his dad did play banjo for a while, his family background in East Tennessee wasn't particularly musical, at least not as musicians.

"The love of music kind of came from my grandfather. He was a big Hank Williams fan and real traditional country and bluegrass, and I spent a lot of time with him growing up, and that kind of rubbed off on me. I still vividly remember listening to one of the Hank Williams records, the 'Luke the Drifter' album that knocked me away and stuff like that is kind of what made me want to do what I do, and my parents were big bluegrass fans, and dad took me to a bluegrass festival... he's still a big bluegrass fan, and he and mom took me to a bluegrass festival when I was nine, and I saw Jimmy Martin play and sing, and that's kind of what made me want to pick up the guitar."

"The 'Hank Williams generation', " he continues, "With that came the whole different era after Hank and Lefty (Frizzell) and all those guys, and the honky tonk sound changed just a little bit and even Ray Price and stuff like that, with the more traditional-sounding country, it may have had some progress along the way, but the roots have always been intact, and I think the roots have always been intact because the torch has been handed down from these different players to these other different players."

"And it sure seems to be happening as far as with all those other guys, and I can only hope to have a miniscule amount of the career that folks like Marty (Stuart) and those guys have had. They've just done so much for country music...and for American music in general, just to keep this unique art form alive and keep it what it is. Yes, I definitely hope that the torch will continue to go."