Surely there is some irony in the title of Jim Ed Brown's new album – "In Style Again." At least it's a little ironic for his fans, for as far as they're concerned neither Brown nor his music have been out of style. His strong, mellow voice flows like liquid gold over and around any song he chooses to sing.

A member of the Grand Ole Opry since 1963, Brown has the distinction of having hits on the charts as a member of a trio - The Browns, whose biggest hit is the 1959 chestnut "The Three Bell," a member of the award-winning duo with Helen Cornelius- ("I Don't Want to Have to Marry You") and as a solo artist with hits such as "Pop-a-Top." 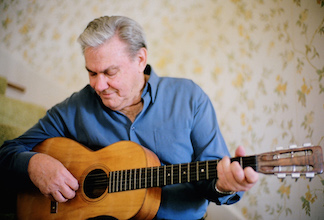 On "In Style Again," Brown displays the smooth vocals that are his signature while the songs embody country traditionalism at its best. The album contains both old favorites - composed by legendary writers including Cindy Walker ("I Love It"), Paul Overstreet and Don Schlitz "You Again") and Bill Anderson "Lucky Enough") - and new tunes written by producer Don Cusic. A number of guests - including Vince Gill ("Tried And True") and The Whites ("You Again"), and a reunion with longtime duet partner Helen Cornelius ("Don't Let Me Cross Over") - join Brown for a song. The result is the same high quality, pure vocal magic that Brown has delivered on his albums since he started in the business over 60 years ago.

Brown talked from his home just outside of Nashville.

CST: Tell me the story of this album.
Brown: It's kind of strange; I haven't recorded an album in like 30 years. You know, Eddy Arnold was a great friend of mine; when he died, he left his estate to his grandson, Shannon Pollard, who's now president at Plowboy Records; I'd stop in from time to time to visit Shannon, and one day he mentioned that he was thinking about recording some of Eddy's songs. I said, "I'd love to do some things with you," and he said right away, "Well, why don't we? Let's do it." And then I got in touch with Don Cusic - I've known him for over 20 years - and he did a great job of producing the album and writing many of the songs on the record. It took us about six months to put the album together.

CST: How did you select the songs?
Brown: We must have had over 40 songs or thereabouts, but we narrowed it down to the 13 that are on the album. As a singer, you're constantly wanting to songs, and you collect songs. Some of the songs on this album I've held onto for many years. The first song on the record, "When the Sun Says Hello to the Mountain," I got in Germany in maybe 1970 or 1971. When I came home from my tour over there, I called up Maxine and Bonnie and told them I had a beautiful song for The Browns and why don't we record it. They told me that The Browns were retired, so we didn't record the song then; but now, I think it's one of the most beautiful songs on the album. On this album, Bonnie joined me and sang her part and Maxine's part.

CST: Where did you find the title track?
Brown: Well, the song is about a kind of wishful thinking; as we grow old, we'll look back and think, "what if we end up doing the same thing they're doing?" But the way I found the song is pretty interesting. One night my secretary went to one of the guitar pulls we have around town, and she heard Lance Miller introduce "In Style" by saying, "My wife don't like this song, but I'm going to play it anyway." [laughs] Well, Bobby Bare brought it to me and said, "I think this could be a hit; can you sing it, Jim Ed?" I said I could, and I asked Bobby to produce the song.

CST: Tell me the story of the song "Am I Still Country?"
Brown: Well, I was raised on a farm. When you work on a farm, you learn a lot about life and how to get by. When my daddy gave me my first gun, he said, "Son, every time you shoot this you got to bring back something to eat. I'm still a country boy at heart, but I don't live on the farm any more; I live close enough to the city to do what I need to do, but I'm still enough of a country boy that some of these city things I like to do, but not many of them.

CST: What do you think of the current state of country music?
Brown: These boys and girls are doing a great job because they're selling records. In 1954, when we started working in this business, we did it because we loved it; it was basically a labor of love. I'd be trying my best to sell records. Sometimes I wonder how they'd do, though, if they had to get in a car and drive down those crooked roads to sell records. But country radio is hard these days. I don't like what they're doing because they don't play me. [laughs] Seriously, you can divide country radio into two classes. The indie stations are doing a great job of getting country music - deep catalog stuff and newer music - out there. The top 100 or 150 country stations have a small playlist; they'll play the records the labels furnish them, and they'll play those same songs over and over and over.

CST: How have you developed as a musician over your career?
Brown: I've learned an awful lot. It's been a labor of love. My voice has certainly matured and grown stronger. I've learned that you kinda take things as they come. God gives you the ability to go where you need to go, if you can follow his directions. Prayer is the answer to a lot of things; I've grown to trust in the Lord to open the doors for me to walk through. I've made many great friends in this business. I love life. I'm not a negative person at all; God has given me a great place to live. I like happy songs, and I try to put a little life in them.

CST: What's next for you, Jim Ed?
Brown: Well, I pray that the Lord gives me strength to do another album; we have several songs that didn't make this album, and Helen Cornelius (and I) have several unreleased duets.