Perhaps there are few more beloved names in the world of country and bluegrass music than Ricky Skaggs and his wife Sharon of the country music family act The Whites. The two have been close friends since their teenage years through music, first meeting at a festival where White was performing with her father Buck White and sister Cheryl and Skaggs was performing with Keith Whitley. 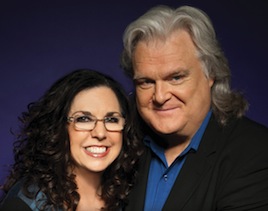 It was, however a bumpy road with a few difficult curves that finally led to them becoming husband and wife 33 years ago. But through those difficult times and sometimes painful places, the couple has built a strong relationship founded first on faith and second on family.

Though decades in the making, the couple have finally released a duets album, "Hearts Like Ours." The CD, featuring primarily love songs, has proven to be definitely worth the wait.

In 1987, when the couple won CMA Vocal Duo of the Year, the first married couple to win the award, for "Love Can't Ever Get Better Than This," the obvious conclusion in the commercial world of music would have been another duet soon to follow, if not an entire album of Skaggs/White duets. But once again, the pair did not choose the seemingly obvious course.

Although Skaggs has performed with the White Family at a number of shows and events over the years, another duet or duet album did not happen. Instead, they continued focusing on their individual careers. Skaggs enjoyed his award-winning solo career in country music including 12 number 1 songs, 14 Grammy Awards and numerous CMA Awards including Entertainer of the Year in 1985 and then continued on to have a highly successful career in the bluegrass world in which he was raised in his native Kentucky, with his band Kentucky Thunder. White toured with her family's band. As a couple, they chose to focus on raising their children, Molly and Luke, making their family and faith their continued first priority.

Actually, a small series of duets did happen for the couple on that special day 33 years ago. Sharon shared that one of the songs included on the album, "If I Needed You," the well-known and much recorded standard penned by the late Townes Van Zandt, was actually their first duet together.

Skaggs chose the Ronnie Milsap hit "What a Difference You've Made in My Life" to sing to White, and White sang the Don Williams ballad "Til the Rivers All Run Dry."

The two then sang "If I Needed You" to each other. White added that while they were both glad they chose to do it that way, "I don't think either of us realized how difficult, emotionally, it would be."

Nevertheless, a recorded duet, much less an album of duets did not happen. Until now.

The collection contains honest, soul-searching and heartfelt love songs, about the good and the bad and the dreams we all have for lifetime love. A good measure of sound relationship advice is interspersed throughout. But if you had asked the pair just a while ago, they would likely told you a duet album was not likely in their future.

"I had really decided it would probably never happen," White explained. "We were invited to sing some songs at a couple's event, and share a testimony, and we put together some songs. The timing just felt right. We are at a place where we have learned some things together, about love and commitment, family and faith," White says.

Skaggs believes in White's ability to find and choose songs, and although it was a joint project from beginning to end, he relied on her to choose much of the music for the album.

"'Hearts Like Ours' is a dream come true for Sharon and I," says Skaggs. "Being married for 33 years, you get to know someone's heart. I know hers, and she knows mine, and we hope you can hear that on this CD. I loved getting to work with her."

White says she just believed the timing was right. "I am so happy that Ricky and I have finally done a duet CD, which we have wanted to do for years, and I think our hearts are in the right place to do this now. It was great to pick songs together and share ideas about how we wanted to do them. I have always enjoyed making music with Ricky, so this album is the fulfillment of a dream of my heart."

Commitment to their faith and strong family values are evident throughout, from the acknowledgement that marriage is sometimes just difficult, and their faith in God is what keeps theirs working on the song "It Takes Three." The title track and the song "I Run To You," serve as a clear proclamation of love and security between the two. Skaggs' family friends Connie Smith and Marty Stuart penned both. "Home is Wherever You Are" comes across as absolutely genuine, in a way that might not be so obvious without the heartfelt love and spiritual connection between the two.

"Hold On Tight, Let It Go" features Skaggs on vocals and is a treasure of relationship advice for all relationships. The lyrics: "Hold on tight; let it go. Our love is always strongest when we let our weakness show. We don't have to give in to the prideful winds that blow if we hold on tight; let it go." "Be Kind," featuring vocals by Skaggs, is a testament to the importance of simple acts like kindness and forgiveness in every relationship.

As for something a little different from the theme of love songs, every person can relate to "When I'm Good and Gone" written by Buddy Jewell and Leslie Satcher, with White on vocals. The song reflects on what we each want to leave behind when we are no longer on this earth; how we want to be remembered. Skaggs jokes, "You don't want to make the preacher have to lie about you at your funeral." He added more seriously, "You want to leave something good for people to remember when you're gone."