What a difference a year can make. Last year, Sturgill Simpson was overly anxious about the arrival of his debut album, "High Top Mountain." This year, Simpson is simultaneously anticipating the birth of his debut child and his just-released sophomore album, "Metamodern Sounds in Country Music," and his mood couldn't be more relaxed and joyous. 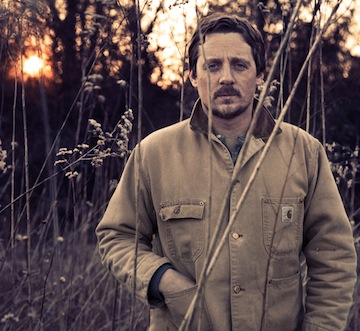 "They're giving me four weeks to get to know my newborn son, and then I'll probably see him again when he's two," jokes Simpson from his Nashville home. "This whole record thing has taken this giant back seat in my head, compared to everything else that's going on. With the first album, I worried about things that were completely out of my control, that you don't know enough to not worry about. This has been a much different situation. I did it with my band. So, I feel like I have a team of brothers, and we're all on the same mission. It's been a lot of fun."

Thirteen months ago, Simpson self-released his debut to the kind of acclaim that a new artist can usually only hope to generate. Comparisons to Waylon Jennings and Merle Haggard were frequent and, in fact, well deserved, but it's the kind of press kit glory that can intimidate the most self-assured performer.

"I don't need any help in that department. I'm definitely my own worst critic and enemy," says Simpson. "Having Pig Robbins and those guys in the studio for 'High Top' really did wonders for my confidence, and I had to do my best because they would literally call me out if they thought for a second I wasn't doing my best."

After the release of "High Top Mountain," Simpson and his live band - guitarist Laur Joamets, bassist Kevin Black and drummer Miles Miller - hit the road for a grueling and seemingly endless tour promoting the traditional country album. And over the course of the subsequent year, the "High Top" songs began to evolve, and Simpson's new songs exuded a very different kind of country vibe.

"I feel like I carved out my own sound and found my voice a little bit more and became a better singer after a year on the road," says Simpson. "The studio is just a microscope to really test yourself to see what you've accomplished since the last time you did this."

For his sophomore album, Simpson utilized his reliable and hyper-talented live band and producer Dave Cobb, who had manned the board for "High Top" and has since become a trusted confidante and good friend.

With just a spare handful of new songs - some of which were completely unknown to the band and inspired by Simpson's reading about string theory, religion, quantum physics and otherworldly occurrences due to the hallucinogen DMT - band and producer hit the studio on a 4-day break from the road and turned a $4,000 budget into "Metamodern Music."

"On the first record, Dave and I followed the delicate thing of a producer and artist getting to know each other and imposing their ideas and you both think your ideas are better, and you're feeling one another out," says Simpson.

"By the time we finished a week later, Dave had a profound understanding of me as a person and a personality. We've actually become incredibly close friends. There wasn't really a discussion at all with this one, he was like, 'What do you want to do?' And I said, 'I've been reading this, this and this, and I've got these songs, and I want it to sound like the roughest life you could ever live, that texture and realness.' And he was like, 'Yeah, I got it.' The thing I'm most happy about is that it all feels linear, and there's a synergy to it, like all those songs belong together. I want to record albums that people want to listen to all the way through."

With "Metamodern Sounds," Simpson and his creative crew have crafted an album that nods towards '70s outlaw country with trippy elements of rock, folk and even electronica. The sonic diversity gives it a unique atmospheric quality that is both informed by the past and firmly rooted in the present, a contemporary timelessness.

"Like early Merle records with a little more grit, like if Merle and the Strangers were all heroin addicts. I wanted it to feel lived in, like this album lived a life that didn't go according to plan."

Simpson, in his mid-30s, knows about building without a blueprint. He learned to play guitar at six - both of his grandfathers were musicians - and by high school, he'd become engrossed in Mississippi John Hurt and Blind Lemon Jefferson. Simpson gave up music during a stint in the Navy, then returned to Lexington, Ky. and played sporadically in a local band before taking a railroad job and shelving music again. Simpson's wife was the catalyst for his explosive return to music.

"If it wasn't for my wife, I wouldn't be doing this," he says. "For whatever reason, at the end of that jaunt with the railroad, I was really depressed, so I started playing at home which turned into writing a lot. She went and bought me a little 12-track at Guitar Center and said, 'You should learn how to use this and record some stuff.' So I did."

"Then she snuck off to the local radio station in Salt Lake City and begged them to play my stuff. We'd go to meet friends for dinner at barbeque joints and next thing I know, she's pulling my guitar out of the car, and I'm getting up and singing five or six songs. I just kind of fell in love with it all over again. She told me, "You're going to wake up and be 40 and know that you never tried to do what you really love, and then I'm stuck with you.' So we sold everything we couldn't give away, and she and I and our hound dog Hank packed up a Ford Bronco and drove to Nashville. That was about four years ago. It's been one completely surreal baby step forward after another, and I'm just trying to stay humble and appreciative and not take any of it for granted."

Simpson's quick to give credit away and deflects any undue attention to his own considerable gifts. He's genuinely amazed at the outpouring of positivity surrounding "Metamodern Music" - after his recent performance on Prairie Home Companion, Garrison Keillor informed Simpson that it was the first time he'd ever given four songs to a musical act.

And when he ponders the idea that he might have the same kind of career longevity as the icons he's been compared to, he has an appropriately self-deprecating response. "I hope so. I don't what else I'm going to do," says Simpson. "I would be up shit creek. For good or bad, I have to see it through. It's all bubblegum and ice cream now, but 10 years from now, I'll probably write my 'Blood on the Tracks' and get brutally raped by the press. I know the bad will come at some point, and if you believe the good, you've got to believe the bad. I try to steer clear of all that but right now, honestly, I'm so sick of myself. There's so much hype, it makes me nervous because there's nowhere to go from there. Obviously, we're left with the problem of what next. If I had any smarts at all, I'd just retire."