Gerry House comes out (from behind the mic)

For 25 years, Gerry House spent every weekday morning in people's living rooms. As the host of the much-loved and much-acclaimed morning show, Gerry House and the House Foundation, House reigned on the airwaves on Nashville's WSIX-FM from 1983-2010, taking a brief hiatus to work for WSM-AM in Nashville and for KLAC in Los Angeles.

As a DJ, he's won numerous awards for his radio work from the Country Music Association and the Academy of Country Music. House interviewed many of country music's most visible artists; at the same time, he was writing or co-writing songs for folks like Reba McEntire (Little Rock), LeAnn Rimes (On the Side of Angels), George Strait (The Big One), Pam Tillis (The River and the Highway) and Clint Black ("Nothing But Taillights"). 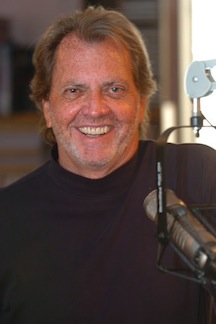 In 2003, House awoke one morning with a severe headache; he was diagnosed with a bleeding artery and had surgery for it, from which he is now fully recovered enough to joke about it in the title of his new book, "Country Music Broke My Brain: A Behind-the-Microphone Peek at Nashville's Famous & Fabulous Stars."

Since his retirement from radio on Dec. 15, 2010, House, 66, has continued writing songs, writing jokes for others to perform on awards shows and speaking about his music career. He brings an insider's perspective of the music business to his talks, and just last month, he released his often gut-busting, let-me-sit-down-and-tell-you-the-one-about collection of stories and anecdotes from his long career.

There's never a dull moment as House regales us with tales of Johnny Cash's confessing to be the father of Madonna's child - a joke the very funny Cash played on House - or Tanya Tucker's admission to the difficulties of coming down from the adrenaline high of performing and having to turn to other things to keep the high going, or his times on the road with Reba, or his observations of Don Williams' slow-moving nature: "When Don talks, he's hilarious; unfortunately, by the time his answer oozes out, everybody is home asleep."

What prompted this book now? How long did it take to write it?
House I started it right after I went off the air, and Duane Ward worked to book me on speaking engagements. Folks would listen to me tell my stories, and they'd come up and ask me where they could buy the book. I finished the book in about six months because I had discovered that having it would add cachet to my speaking engagements. I didn't want to write just a memoir where I'd tell the story of my life in chronological order, but I knew I wanted it to be a book about my years in radio, so that became the way I organized it.

Can you share the process of writing it?
House:Well, you know, I'm always writing, whether it's jokes for people to use on awards shows or writing or co-writing songs. On the radio, you get immediate feedback when you tell a joke you've written; people will pick up their phones and just call in to tell you what's on their mind. Radio is the last stop on the entertainment highway. Writing the book, though, was like writing in a vacuum. This was a very freeing experience because I could write what I wanted to write.

How did you come up with this title?
House:My original title was "Country Music Causes Brain Damage," but my publishers thought that might be offensive to people who had suffered brain damage. I agreed with them, especially since I had gone through my own brain crisis, and it wasn't funny at all. We eventually settled on this title, which still expresses a great deal of humor about this business of which I'm a part.

Do you remember the first time you came to Nashville and what you did your first night here?
House:Yes; I drove down from Ithaca, N.Y. in 1975; we stayed at the Hyatt Regency downtown, and I looked out the window, and I remember wondering how people made it as writers in this town. But I had come to take a job in radio, and I joined WSIX-AM that year, and I got an immediate raise in pay since there was no income tax in Tennessee.

When did you decide to become a DJ?
House:I tell the story in the book about going on vacation with my parents and hearing Hank Snow on the radio. I was 10, and I decided at the time that country music was not my preference, largely thanks to some other musical influences - my piano teacher, Mrs. Riggs; the jukebox sound system at Pleasure Isle, a kind of swimming pool, where I heard Elvis and the Everly Brothers; and my playing piano at church every Sunday. However, not long after this trip, I got a transistor radio, and as I say in the book, I was hooked; I started to notice that in addition to the music there were these guys with golden voices who seemed to be talking directly to me. I knew then that I loved it.

You're also a songwriter. When did you start writing songs?
House:I bought a Yamaha guitar on the day my daughter was born in Ithaca; I still write on that guitar. I wrote songs for her. When you write songs, you don't know why or how to get them recorded; you're just writing.