The Steep Canyon Rangers are riding high these days following the release of its new album, "Tell the Ones I Love." The band also gained some notoriety when Steve Martin joined them for an album, 2011's "Rare Bird Alert, "which was nominated for a Grammy; later that year, they won IBMA's Entertainer of the Year Award.

In 2012, the band went up to Levon Helm's studio in New York- he had invited them to come up and record just a few weeks before he passed away - to record the new album.

Banjo player Graham Sharp spoke in late September as the band was on the road to Raleigh, N.C. for the IBMA. 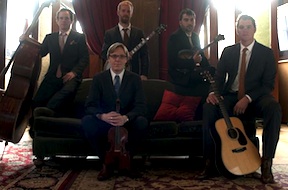 How did you end up at Levon Helm's studio? How long did it take to make the album?
We got to do one of the Rambles there in 2012; this wasn't too long before Levon passed away. He came over to us after we played and told us that they'd never made a bluegrass album at the Barn and he invited us to record one there. It was a magical place; we set up all the instruments in this big room and had this big fire roaring. It took us about nine days, and we did it live, with very few overdubs. It was great to work with Larry Campbell, who produced the album; he gave us so much leeway to explore our music and the sounds we wanted. We were tossing around about 20 songs when we went into the studio, and we ended up spending a lot of time on arranging once we got in the studio. The sound of this record is so great; we miked every corner of the Barn and captured the environment of the Barn itself.

How long have you guys been together?
We meet at the University of North Carolina 15 years ago; we had similar tastes in music and had a good understanding of what we were looking for when we played music together.

Bluer Words were Never Spoken has that David Grisman-Old and in the Way-Grateful Dead feel. What are your musical influences?
Charles Humphrey co-wrote that song with Jonathan Byrd, and we worked it up a couple of weeks before we went up to the Barn to rehearse. What I love about that song is that it's very spare and gives the vocals lots of room. It's a sad song, but there is a lot of space for the melody in it.
Our influences include probably the usual suspects: Scruggs and Monroe. John Hartford and Norman Blake really influenced me when I started out. We try to find a way for bluegrass to express stuff that is meaningful and has a personal connection to us and to put the music in a light that makes sense to us.

Tell me a little bit about your writing process. How do you go about writing a song?
Well, there's no magical formula (laughs). It's often a long process of putting together words with music, and sometimes I'm lucky in the one or two that come along quickly. I spend a lot of time getting it wrong before getting it right.

I know everybody asks you this question...
You mean about Steve?

Yes, let's not spend much time on it, but what's it been like to work with him (Steve Martin), and how has your work with him influenced the band's view of itself and its music?
Working with him has given us the confidence to follow our own sound and to be who we are. He's taught us to make it your own and not to hew closely to any particular formula. With this new album, for instance, we added percussion to the songs a month or two before we did the album; the songs really lent themselves to using percussion, and we didn't worry about sticking to a bluegrass formula. Steve's work ethic is really amazing; it was so great to see it firsthand. He taught us to work on things we do best.

How has your music evolved over the years? What's different, do you think, about this new album from your earlier ones?
We've learned not to stick to any one particular formula. We have gotten better at giving each song its own character, I think. The material we're playing now is more in a comfort zone for us, and we've always tried to focus on the various parts of a song as we perform or record it. I think we're focused a little more now on our vocals and the ways that vocal diversity shapes a more melodic style. We do hope we can be a bridge between the bluegrass crowd and a wider audience that may not be die-hard bluegrass fans.