The son of a Methodist minister, Peter Cooper hails from Florence, S.C. and kicked around South Carolina and Virginia before landing in Nashville in 2000 as the Tennessean's music critic. He has worked in the studio as a performer, producer or session musician with Tom T. Hall, Todd Snider, Emmylou Harris, Nanci Griffith and Bobby Bare, among many others, and he's recorded two solo albums – "The Mission Door" (2008) and "The Lloyd Green Album" (2010) - and three duo albums with Eric Brace – "You Don't Have to Like Them Both" (2008), "Master Sessions" (2010), and "The Comeback Album" (2013).

As consummate a musician and songwriter as he is, Cooper is also Nashville's most trusted and respected music writer, and when he's not playing the bass or the guitar at the Family Wash or another Nashville establishment, he's reporting on a new singer around town or on one of country music legend's new projects.

In her new book, They Came to Nashville, Marshall Chapman asked the people she interviewed three questions, and those questions are a good place to start: When did you first come to Nashville? How did you get here? What did you do your first night in town? 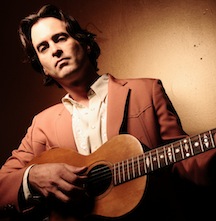 The first time I ever came here I was about 22, and I came with my girlfriend, who's now my wife, because I'd never been here before. We drove up from Birmingham, Ala., in an old Honda Civic to see some shows, and that night we saw John Hiatt. The first thing I did, though; was to go into Gruhn's Guitars; I wanted to look at all the guitars I couldn't afford to buy. I think I knew I was in the right place that day when I walked around the corner into one of the rooms, and there was John Hartford sitting playing a banjo. We were going to head back after the Hiatt show, but we found out that Townes Van Zandt was playing at this little club out on Nolensville Road the next night, and you know we had to stick around to see him. Townes wasn't doing so well in those days; he was looking pretty worn out. I was thrilled to get to talk with him a few minutes during the meet-and-greet after the show, and he told me "Take care." And I was thinking, "Man, you better take care." After that first trip, I knew I wanted to come back to Nashville as often as I could.

Did you always want to play music, or were you more interested in just writing about it?
You know, I was making music long before I was writing about. After that first trip to Nashville, I started playing a lot of music with my friend, Baker Maultsby, in Spartanburg, S.C., and we still co-write music. Baker and I wrote Thompson Street on Eric Brace's and my recent "Comeback " album. Then, in 2005-06, Todd Snider asked me to open some shows for him. Todd's such an instigator to anyone of his generation writing songs. He's been a real help, and I've learned so much just watching him on stage. Todd always told me to be sure to get up every day and write songs.

Okay, so you loved playing music and writings songs; what brought you to the Tennessean to cover music?
Well, I was teaching middle school in Rock Hill and Columbia, S.C. - I talk about that experience in the album's opening song - Much Better Now - and I was looking for a change. I started as a beat reporter at the Spartanburg Herald Journal, and the first story they sent me to cover was a drowning. Pretty soon I started covering some music events for the paper, and in 1997, I wrote a book about all the great musicians that hailed from Spartanburg - including the Marshall Tucker Band, Walter Hyatt, David Bal, and Marshall Chapman - called "Hub City Music Makers." In 2000, a spot came open at the Tennessean, and I sent in my clips, and they were kind enough to hire me (laughs).

What's your writing process like? Different for journalism and songs?
Writing songs is a mysterious process for me; I don't have a set method for writing songs. I do keep my antennae up so that I can hear and be aware of the things people say. I hardly ever sit down and say, "I'm going to write a song now," though sometimes I try to trick myself, and I'll sit down with my guitar and will end up with a song. But you know that writing songs and writing stories for the paper are very similar. I love writing about other people; getting to understand other people's creative process helps you to understand your own. You know, whether I'm writing a song or writing a story, the unique thing I can bring is perspective, and the only perspective I can bring is mine. If it's a song, the story is likely about me; if it's a piece in the Tennessean, it's likely a story about someone else. When I write something from my perspective, there's no competition.

How long did it take to make this new album, "Opening Day"?
I was under no pressure to make a new album. Three years ago when my son, Baker, was born, I wrote the song Opening Day. It's a song about new possibilities and how for a moment at least there's a time when everything is good; on opening day of baseball season, every team is tied for first, as I write in the song. The rest of the songs just came along. I handed them over to Lloyd Green, who's an essential part of every album I've ever recorded, and he just turned them into beautiful songs. The soul of Lloyd Green playing steel guitar is the most emotionally compelling sound I've ever heard. Music comes straight out of his heart through his hands.

Who are some of your musical heroes/mentors?
When I was five, I went to see Kris Kristofferson and Rita Coolidge at the Carowinds amusement park just outside Charlotte one hot summer day; when I was seven, I got to see Waylon, Jessi, and Jerry Reid; so I was lucky to be exposed very early to this kind of music, these great musicians and songwriters. When I was in high school in Springfield, Va., I saw The Seldom Scene at the Birchmere in Alexandria, and became fascinated with roots music. I'm incredibly appreciative I got to be around there; in fact, when I would go to hear other bluegrass bands, they never measured up The Seldom Scene. Tom T. Hall is someone I listen to and learn from every day. He was an album artist back when those weren't being made in country music. I mean, here's this Bob Dylan figure who lives out in Brentwood, just south of Nashville. I loved his "Songs from Fox Hollow" album as a kid, and Eric Brace and I were fortunate enough to gather a number of artists to do a new recording a couple of years ago that was nominated for a Grammy.

What's the best kept musical secret in Nashville?
Monday, Tuesday, and Wednesday nights. Man, Nashville's off nights are like MerleFest. The depth of musicality here is so incredible, and you can walk into lots of places on these nights and hear any one of Nashville's finest musicians or songwriters playing.