On a bright June afternoon, Darrin Vincent and his partner of six years, Jamie Dailey, are out on the road yet again, en route with their band from their Nashville base to a festival gig in Kentucky, just a few hundred more miles on the odometer of the bus that carries them around the country. The title of their new Rounder release, "Brothers Of The Highway" is a testament to the bond they've forged since going out on their own and taking the bluegrass world by storm in 2007. 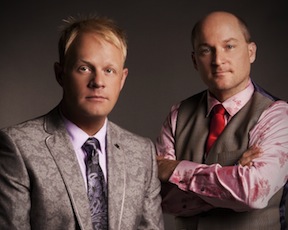 The title track, an ode to truckers and a one-time hit for George Strait, was a late addition, but Vincent says it clicked with them right away.

"(That song) came in almost at the last hour from a publisher, and we immediately looked at each other and said, "Man, this is a great lyric.' The song, it talks about what we really do - even though we're not truck drivers, we're out there on the road every weekend, going up and down. And then when we heard it, we thought man, (former Statler Brother) Jimmy Fortune could really put a harmony part on there that would blend pretty well with us and (the band's bass player and singer) Christian Davis. And it really fit the body of work - even though it's a little further out from bluegrass. I think it really fits the CD well."

"Fitting" material, Vincent continues, is a key ingredient in their ongoing success in finding songs that aren't just "bluegrass songs," even if as on this release they end up writing a few themselves.

"First, we try to find songs that really speak to our hearts and things that we can sing, and that our audience, our group of fans would want to hear from us. We try to write songs that we enjoy and that we think will fit records. We try to look through a bunch of songs that would fit as a body of work."

A prime example is the closing track that features Dailey on a reprise of Where've You Been, a major hit in the late 1980s for Kathy Mattea, written by her husband Jon Vezner. "We were talking to Ken (Irwin, head of Rounder), he said he wanted a familiar song, (something) that would be more familiar to the folks at Cracker Barrel records. Some of that audience might pick up this record, since it might have a recognizable title on it."

The song is about an Alzheimer's patient who finally recognizes her spouse, and Vincent says it always struck a chord with him and Dailey. "It touched our heart when Kathy put it out on the radio, and being married - I celebrated my 20th wedding anniversary yesterday - every time I hear it, it just makes me cry. I always want to be around my baby and my wife, and if I ever had Alzheimer's, I would think if we ever did see each other, I would remember her over anybody else."

A large part of the Dailey and Vincent success story is that, as good as the recordings have been, they put on one of the most dynamic and entertaining stage shows in American music today.

"Part of what we think is important is to entertain the folks, make them laugh and cry, and give them the 'show' part, except I feel we're a little deeper than just 'showmen'. I believe we have great musicians on stage with us, and great vocalists, and I think (the audience gets) the whole ball of wax with our show, even though you know, you say 'showmen' like that, I respect that, but yet I think we're artists, and we have a high integrity of keeping the bar high when it comes to the lyrics, performing the vocals and also the musicianship. We take every bit of this seriously and try to just put a collective show together for folks. I think that's what sets us apart from everybody else - we do try to entertain, and we try not to let people get complacent with the show and say, well, we know what's coming next, we try to keep them engaged in our performance."

Vincent hastens to credit the musicians past and present who have been part of the band. The current lineup features B.J. Cherryholmes (fiddle), Jeff Parker (mandolin), Christian Davis (guitar, whose ground shaking bass vocals must be heard live for full effect), Seth Taylor (guitar) and Jessie Baker (banjo).

At the time of the "O Brother" phenomenon at the turn of the century, Dailey was in the midst of what would turn out to be nearly a decade as lead singer in Doyle Lawson's band Quicksilver, and Vincent was likewise touring with Ricky Skaggs and Kentucky Thunder. They both had ringside seats to the wave of interest in bluegrass the film generated, and Vincent reflects that there were a lot of sides to it.

"We (Skaggs and band) were on the "Down From The Mountain" tour, promoting that music. At that time it was a great thing. But I can also say it got the word out, people think that old time music is cool, and (bands like) the Old Crow Medicine Show, the (Carolina) Chocolate Drops - even though it's not bluegrass, it's old string music. I think people find it really cool and intriguing. "

"Another thing that's really helped us," he continues, "and bluegrass in general is the Cracker Barrel Old Country Stores, their corporate involvement in bluegrass and acoustic music, it's really helped a lot. They serve, I think it's over a million people a week at their stores, and having (bluegrass) in there playing while people are shopping and eating, it's just been huge for our music."

At the suggestion that "O Brother" opened the doors for bluegrass to the theaters, opera halls and other performing arts centers, Vincent is quick to credit people, and not so much the movie.

"I know from looking through my eyes that Ricky really tried to push back then for performing arts centers back then when I was with Ricky, and I think he really helped pave the way for that, and the Cherryholmes', they did a lot of that, Doyle (Lawson) and my sister Rhonda (Vincent), they all pushed to get bluegrass into the performing arts centers."

Six years after teaming up and taking the plunge on their own, Vincent says they've learned a lot, sometimes the hard way.

"You put your trust and faith in people and they disappoint you, and I think that's been the hardest lesson for us to learn. And I think that's in any business where you hire people to work for you, and then they disappoint you - that's a hard thing to swallow. We knew it was going to be hard, and we didn't expect any of the success and blessing the Lord has given us, but I wouldn't change a thing."

"I just want folks to know we are truly having a good time playing and singing music for them. We're just humble and appreciative of all the support they've given us over these six years, and I hope they just find us interesting and intriguing and stick with us for years to come and keep coming out to see us."