It's about time for Willis, Robison

Some folks listening to Kelly Willis and Bruce Robison's new duet album, "Cheaters Game," may well exclaim, 'Well, it's about time!' after finally hearing these two talented country singer/songwriters recording music as a pair for the first time. 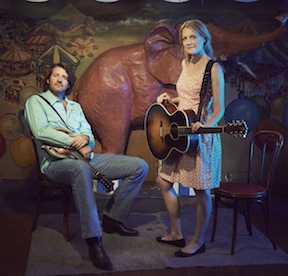 Willis has built quite a following for her independently-minded feminine perspective, while Robison has written hits for the Dixie Chicks (Travelin' Soldier) and Tim McGraw and Faith Hill (Angry All the Time), as well as penning the ultimate Willie Nelson tribute, What Would Willie Do? and recording it as a solo act.

Now billed as the Bruce And Kelly Show live, these two talented individuals have pooled their resources together to create something really special.

"I think it was about a year and a half, maybe close to two years since Bruce and I started playing together with the intention of working up songs to do for this project, " Willis says, when asked how long "Cheaters Game" has been in the works. "We took it on the road the last summer as a four-piece and kind of worked out our sound," Willis continues. "We wanted to come up with a sound that was uniquely ours as opposed to whatever we sound like solo. It was real stripped down. We just had our pedal steel and stand-up bass, and decided we really like the stand-up as opposed to the electric bass and just kind of hashed it out. So, I took a while."

Although this release has a good chunk of covers, it was always going to be a recording that contained a little bit of Robison/Willis, and a little bit of songs by other artists that the pair collectively love.

"We did not intend to do all covers, ever," Willis explains. "We intended do plenty of original material and any songs that just worked that were good. So, we found some old songs. Sometimes we'd go through stuff that just didn't click. Stuff that we thought would be awesome, but it just kind of wasn't. And the stuff that really did work ended up on the record. We didn't care where that came from."

One of the album's best tracks is a cover of Dave Alvin's Blasters' favorite, Border Radio, almost didn't make it to the final cut.

"Like at first, I was really hesitant to do Border Radio," Willis admits, "because I thought, 'This is a classic song that everyone knows and loves, so there's really no point to doing it again.' But Bruce came up with this really cool little groove, and it sounded different, and it felt like at least like a slightly different take on it that was kinda fun and maybe worth hearing. It could never top the original, but it was still something that was kinda cool. What I liked about it was it kind of brought our two worlds together because I was really a child of that. When I started cutting my teeth musically, that was really the world that I was really being exposed to and dreaming about being a part of. That real roots-y stuff. And that really wasn't a part of Bruce's world or where he was at all. So he would take his musical groove and attach it to something from my musical upbringing. That's what we were doing, was trying to figure out what a collaboration between us might sound like."

This cover of Border Radio exemplifies how Robison and Willis achieved some stylistic common ground together.

"It was just a fun, creative process that," she says, "finding little gems like that and finding out what we could do with them."

Although Robison and Willis make a great musical couple and a fine married couple in general, they do still have musical taste differences, which is why "Cheaters Game" was still a bit of a challenge to put together.

"He likes to make fun of me with rockabilly music," she explains. "He likes rockabilly music just fine, but maybe not to the degree that I do since I used to be in a rockabilly band and all that. We just have our areas that are our favorites, but mostly we're just into the same thing. I can see where he's coming from, but he really had to show me what's great about some of that '70s country music because, as a rockabilly person, I had just written off all '70s country as really not being that cool. And he showed me a whole world of it that was just the coolest stuff. So that's been kind of fun over the years; the two us showing each other music that other one might not have heard so much of."

In addition to Border Radio, Willis also has a few other favorites from the album.

"I really love the 9,999,999 Tears," she notes. "I just think it's really fun," she continues. "I love the groove on it. Leaving and But I Do were two songs that we did in the same session and I was really excited with how they sounded. They had a unique sound to them that sounded unlike things we'd done before."

Willis and Robison are not nearly as much a part of the mainstream country scene as they might have been earlier in their careers, but they still feel a connection to the style.

"I definitely feel we're both country artists," Willis explains. "I feel like there always seems to be a shrinking place for country artists, but that we're not going away so basically what happens is we're just finding different ways to get people to hear it. I still think people really like the kind of music that we do. There's plenty of people liking us doing it and they find ways to get to it. And come out and hear it."

Robison and Willis fit into a wider musical spectrum than what's generally considered the country mainstream. "I love this whole Americana music thing because it's embracing so many people out there that are doing really good music that deserves to be heard. I think that when people are making good music out there, people find out about it. Word of mouth. The industry's changed so much, and in a way it's almost been good for people like us because it's all brand new and everyone has to figure out new ways to hear about music and get the music, and it's good."

Willis is right in how the industry has changed and continues to evolve at a rapid pace. However, the music she and Robison make together would still be considered some of the best music out there, no matter where it fits into the picture now, or where it may have resided in an earlier era. Songs about lovers and cheaters, such as those found on "Cheaters Game," will always hold a universal appeal. Technology might change the way we transmit these eternal musical truths, but the songs will always remain the same.