In business, in sports and in music, the conversation often turns to the concept of the indispensible man, the person whose talent elevates the entity in question above all others and whose absence would cause that entity to stumble and fall. The fact is that indispensability is largely a myth; no single person holds that much sway in any given enterprise. 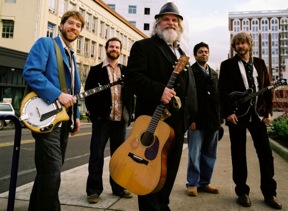 And yet, there is an underlying psychology that reinforces and supports the idea of the indispensible man. Teams are built around a single player, businesses are helmed by powerful and singular executives, and bands are assembled around a key musician. When those crucial elements are removed, the psychological vacuum that remains after their departure can cause irreparable damage.

If jamgrass outfit Leftover Salmon had completely bought into the concept of the indispensible man, their new album, "Aquatic Hitchhiker," their first new studio album in eight years and their debut on their own LoS label, might never have happened. The reality is that founding banjo master Mark Vann's passing in 2002 after a 6-month battle with melanoma did have a huge impact on Leftover Salmon. After two years of trying to replicate the spark, the band decided to take an indefinite break.

"After Mark passed away, it was spiritually difficult to keep the band going," says Salmon co-front man Vince Herman. "We healed a lot by staying off the road."

While Leftover Salmon was dormant, Herman and the rest of the band remained busy. Herman was occupied with his newly formed band, Great American Taxi, while vocalist/multi-instrumentalist Drew Emmitt juggled a number of projects including solo gigs and the Emmitt-Nershi Band, formed with String Cheese Incident front man Bill Nershi. Bassist Greg Garrison hooked up with both the Emmitt-Nershi Band and the Punch Brothers and drummer Jose Martinez kept his chops sharp by playing various jazz gigs.

Respecting Vann's wishes, Leftover Salmon had soldiered on after his death with banjoist Noam Pikelny, but the vibe was too different, and Herman and Emmitt ultimately opted to shutter the band for a spell. Everyone's outside projects began to nudge them closer to the decision to resurrect Leftover Salmon, which led to half a dozen reunion shows in 2007, starting with the Telluride Bluegrass Festival, where they were billed as Vince Herman, Drew Emmitt and Friends.

Yonder Mountain String Band's Jeff Austin noted in his introduction, "No matter what the program says, we all know what's going on here."

"Coming back after not playing for three years kind of spun our heads around," says Herman. "It was like, 'That felt really good. It was really easy, we knew all the tunes and people kind of went shitso about it. Maybe we should do this again.' That was the first thing that prompted us to do more."

Over the next two years, Leftover Salmon played a few scattered dates in between the members' various other commitments. The banjo slot had been filled first by Pikelny and then Matt Flinner; in 2010, the band booked a gig that Flinner couldn't make due to scheduling conflicts. Emmitt invited his Emitt-Nershi Band band mate Andrew Thorn to fill the vacancy, and the chemistry was palpable and immediate.

"That gig felt so right and so natural, real easy to play, and we thought Andy was the guy for the job," says Herman. "It really started feeling like that kind of thing we had with Mark Vann in the band, where Drew and Mark and I were this tripod that the band walked on. Andy really gave us that feeling again."

As Thorn's inspirational presence rippled through the band, Herman and Emmitt realized that this run of dates was not a farewell tour, but a substantial tune-up for a comeback.

"Getting Andy into the mix gave us the idea, 'Well, if we're going to do this, we've got to write and come back with a record,' and the prospect of that felt really good," says Herman. "The idea of writing for Leftover was enticing for all of us, and I guess the amount of fun we could have. With the response we were getting, it seemed pretty stupid to put it to rest."

With Thorn's permanent installation, Leftover Salmon started increasing the frequency of their gigs and ultimately experienced a rejuvenated writing buzz, facilitating a much anticipated return to the studio. Thus was "Aquatic Hitchhiker," Leftover Salmon's seventh studio album and their first non-live recording since their eponymous 2004 album. As it happened, the band's process on "Aquatic Hitchhiker" took a slightly different turn from their previous recordings.

"Generally we'd come to the table with songs pretty much done," says Herman. "Then we'd play them live and tour with them, and by the time we went into the studio, we knew the arrangements. It was pretty much an individual writing effort. This time, somebody would come up with the basic song or progression, and we'd flesh it out together. That was really fun."

Bucking their normal creative trend, the quintet wrote all of the songs for "Aquatic Hitchhiker" right before going into the studio, the lone exception being Kentucky Skies, which Herman brought to the group after it failed to click with Great American Taxi.

"It didn't quite have the bluegrassy feel that I imagined for it there, so it got scratched off of that record," says Herman. "With Salmon, it hit the right groove. But that's the only one I came in with."

What Leftover Salmon came out with stands as one of the best albums in their nearly two decade discography, a clear indication of the chemistry inherent in this iteration of the band (which has featured a dozen members accompanying founders Herman and Emmitt since the band's launch in 1989). As usual, "Aquatic Hitchhiker" features Leftover Salmon's distinctive bluegrass-meets-jam sensibility, a kitchen sink hybrid that includes country, rock, jazz, world and anything else that strikes them and serves the song at hand.

"I like that it's a comfortable record and you can drink beer in the backyard while barbequing and get your friends a little rowdy," says Herman. "It comes from that well of bluegrass, and those rules of bluegrass kind of inform how we arrange our stuff, and when the calypso and that other stuff comes in, it still reflects that bluegrass way of organization. It's high country slamgrass."

2012 certainly looks to be shaping up as the year of the Salmon. The band has an extensive touring schedule in support of "Aquatic Hitchhiker," and they've recently scored an interesting role on The Discovery Channel's After the Catch, a post-season addendum to The Deadliest Catch.

"I've been thinking, 'Damn, maybe we could write a whole fishing album,'" says Herman with a laugh. "The guys talk about the whole season and show some clips from The Deadliest Catch, and they're sitting around a table in a bar, and we're the house band in the bar. We play coming in and out of commercials."

After the release of "Aquatic Hitchhiker," the best news to come out of the Leftover Salmon camp is that fans won't have to endure another eight year wait for the next Salmon album.

"Definitely not," says Herman. "We're already thinking of new stuff. But we're getting out there and playing for people again, and we're happy campers."