At an age when most people are contemplating the direction of their life, Lydia Loveless has already blazed an impressive trail. The 21-year-old Coshocton, Ohio native began playing bass with her two sisters in their band Carson Drew when she was just 13 and was playing solo shows at 15.

"I was in various bands before that, but I never sang," recalls Loveless from her Columbus home. "I was in a punk band where I sang, I guess you could say, but we only played two shows, so that wasn't really much experience." 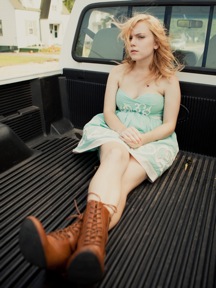 Around Loveless' 14th birthday, the family relocated to Columbus in order to concentrate on everyone's musical aspirations. Without that move to a larger urban locale and all the experiences it had to offer, Loveless' ambitions might have taken considerably longer to realize.

"We were all musicians at that point, so it was pretty inconvenient; basically, farm life is just a pain in the ass after awhile," says Loveless. "It was just too much work getting to shows, and that nonsense. Growing up in the country is so vastly different, moving to Columbus introduced me to different scenes. People were a lot more advanced than the people I'd been hanging out with, so I got into going to punk shows at Bernie's, this iconic punk rock bar in Columbus."

For a couple of years after the Columbus move, Loveless was doing Carson Drew gigs and trying to establish her solo identity simultaneously, but with the band's dissolution, Loveless concentrated on her solo work. Given her upbringing, Loveless' career in music seems inevitable.

"I really liked music, my entire family played and wrote at some point, and I just pictured myself always doing it," says Loveless. "I just didn't have my style yet. My boyfriend at the time introduced me to a lot of country music, and it just came naturally to me because it's so easy to play three chords and sing about how much your life sucks."

At the same time, Loveless is a product of her age and rock and pop figure heavily in her rootsy Americana output (she was in the middle of a Metallica listening session before our interview). The evidence of her diverse and cross-generational influences is all over her sophomore album and Bloodshot debut, the recently-released "Indestructible Machine." Like most 21-year-olds, Loveless has plenty of room in her wheelhouse for the hits of the day.

"My mom introduced me to Elvis Costello and the Velvet Underground, and that probably influenced me as a kid," says Loveless. "Richard Hell was a big influence on me, lyrically and musically. I like a lot of poppier stuff mores o than country, like Ke$ha and Britney Spears; it's like my time, so I can't not like that music. Pop/rock like the Gin Blossoms and The Strokes inspired me when I was growing up in a hick town. They seemed like a sign from God that there was still good music out there."

More than one critic has noticed the stylistic similarities between Loveless and Neko Case (her Bloodshot bio cites her as Case's "tough little sister"), and while she acknowledges the compliment, there's a slight edge to her acceptance.

"It was cool the first 50 times, I guess," she says with a laugh. "I hate to sound like an ingrate, but it's been kind of weird. Awhile ago at my job, there was a Neko Case CD playing and someone was like, 'Is this Lydia?' So I guess I must sound like her because everyone seems to think that's me. There are definitely worse people that you could be sick of being compared to."

"Indestructible Machine" is an amalgam of Loveless' myriad musical exposures. She warbles like Patsy Cline one moment, rattles rafters like the Old 97s the next, and it all rings true with Loveless' powerhouse voice and resolute musical conviction. At the heart of it all, Loveless considers a country/punk/metal icon-in-waiting to be her primary influence.

"Hank III is probably my biggest country influence," says Loveless. "He says it like it is, and that was really inspiring to me. It wasn't like I was intentionally trying to be vulgar or blunt, but he led me to realize that you should say what you're trying to say and not hide it in metaphors and weird story lines that don't make any sense. Waylon Jennings and Merle Haggard were also inspiring to me also, and Hank Williams Sr., obviously. I didn't know who the Old 97s were when I was younger. People started telling me that I sounded like them, so that's how I got to know them. They're definitely an influence for me now."

Loveless had already laid down a fair number of tracks for "Indestructible Machine" when she was contacted by Bloodshot with a contract offer. That offer allowed her to rethink the direction of the album, resulting in very different context than she had originally envisioned.

"We had recorded maybe five songs, most of them acoustic, and when Bloodshot was like, 'Here's an offer,' we went back into the studio and finished everything up and re-recorded all the acoustic tracks, and I wrote a couple more songs to throw on," says Loveless. "The acoustic thing was just a budget issue. There were a couple of songs that I didn't really like the direction we were going with them, so I think the stress and pressure of having to finish an album made us put more effort into it and make it sound cooler. I'm happier with the songs now that they're not acoustic anymore."

One of the highlights of "Indestructible Machine" is the song Steve Earle, which is not about the gifted Americana singer/songwriter, but rather about a Columbus wannabe that was constantly trying to insinuate himself into Loveless' circle. She doesn't think the real Earle has listened to the song yet, although her management was trying to convince him to appear in the video, but there's a chance that the fake Earle has heard it.

"I heard that when I played this festival, he was standing right there, so I think he heard it," says Loveless. "I don't know if he put two and two together. But he doesn't call me anymore or bother me or come to my shows, so I think he might have gotten the hint."

Although "Indestructible Machine" clocks in at a brisk 38 minutes, Loveless has plenty of material for a full set, from her own songs - at least some culled from her 2010 indie debut, "The Only Man" - to inventive covers that reflect her influences across the board.

"If I'm working on something new, I'll drunkenly subject everyone to that," says Loveless. "I do some covers, not too many, but we do Buck Owens and Hank Williams, and we've done Def Leppard and Metallica, which is fun, and I actually do Blind, a Ke$ha cover. I try to keep the country ones as old timey as possible, usually. I've always been fascinated by and wanted to play metal, but I'm not very good at it, so I don't know if I country them up; I probably stupid them up. I want to be an amazing metal guitarist, but I don't think it's really in the cards."