Listening to Dave Alvin's new "Eleven Eleven" album reveals once again what a great storyteller the man is. His songs are filled with the kinds of details normally only found in your better novels. In some cases, he comes off like nothing less than a historian with a guitar.

For example, Johnny Ace Is Dead revisits the death of that beloved performer of yesteryear, while Gary, Indiana 1959 puts the listener right back in the thick of the emerging workers union movement, midcentury. Obviously, Alvin has a lot of important topics on his mind, which is exemplified again and again in this collection of serious and relevant songwriting.

"Most pop music songwriters - and most Nashville type songwriters and all that - they don't touch that kind of stuff anymore," Alvin says. "In the old days, you might get Johnny Horton doing The Battle of New Orleans or Marty Robbins doing El Paso or that kind of thing. It's not part of the contemporary music vocabulary. Nobody does, outside of oddballs like me." 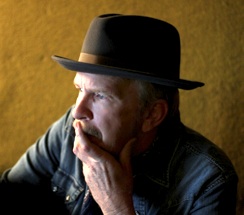 Alvin has a special way of framing details from the lives of people he knows or has known and transforming these personal tales into works that sound like timeless recollections concerning desperados from almost any bygone era. The saddest song by far, is one titled Black Rose of Texas. It looks without blinking into the hard life his late Amy Farris led. Writing it was not an easy task for Alvin, but he felt compelled to write it anyway.

"It was hard but necessary," recalls Alvin, when asked about the degree of difficulty that went into creating this tearjerker.

"I first met her when she was 14 years old," Alvin recounts. "I was playing guitar in band called X – I think it was 1986 – and we were playing at a club in Austin, and she snuck in to see me and to see X, so I knew her since then. Unlike a lot of people that live in Austin, she was born and raised there." It's almost as though the dead cry out for their own songs. "You kind of grab hold of songs like that," says Alvin. " I've had a lot of friends that died. It's a tender subject, so how do you approach it?"

Johnny Ace Is Dead was easier, at least emotionally, to write. "You try to explain the same mystery," notes Alvin, when contrasting these two very different writing exercises – the personal vs. the public. "That's one of the reasons they're attached, sort of, on the record. One leads to the other. They were both suicides in their way, and maybe both were inadvertent."

With Run Conejo Run, Alvin delves again lyrically into the life and death of a friend; in this case, it's Chris Gaffney. Cryptically, he never gives away Gaffney's name in the lyric. If you didn't know better, you might assume this is the painful story of a boxer, almost any boxer, or at least the composite of multiple fighters. In reality, it provides life story details about one of best sidemen in Alvin's Guilty Men band, as well a wonderful performer all on his own.

"His nickname when he was a kid down in South Tucson was ‘Conejo,'" Alvin says. "Chris was very fast," Alvin continues. "People that knew him later in life might find that hard to believe. He was a tough guy in his way. We never came to blows, but there was one night that I was drunk, like, real drunk. And it was a very emotional night. So I was, ‘Come on, Gaffney, you and me!' And he just looked at me and said, ‘Alvin, you don't want to go there.' And I looked at him and I was, like, ‘You're right. What am I, crazy?'

The song pulls no punches, so to speak, when it comes to revealing some of the tragic details of Gaffney's life. "He was blind his left eye," Alvin explains, "not to the point where he couldn't see. He could barely see out of his left eye. "

One other Gaffney-related song draws upon happier times in Alvin and Gaffney's special relationship. It's a duet featuring the two of them, titled Two Lucky Bums, and this lighthearted ode to friendship is like nothing Alvin has recorded before. It finds Alvin playing the showman, rather than the troubadour.

"We kind wrote it to be a Bing Crosby/Bob Hope kind of thing," Alvin says. "There's a long back story to that song, and it was the last thing Chris and I ever recorded together – it was recorded just a couple of months before he passed away. It was supposed to be part of this ‘project,' where we were gonna make an album of duets. But it was all going to be tied into a story. It was going to be the audio equivalent of a Bob and Bing road movie. That was the only one that ever got recorded. I recorded other songs for the CD, but then I decided, ‘You know, this is the one that wraps it up.'"

While Alvin writes a lot about the people he knows he's starting to become more and more comfortable writing about himself. For instance, he says there's a lot of Dave Alvin in the romantic road song, Harlan County Line, which opens the new disc.

"In the past, I would sort of hide everything," Alvin admits. "I'm a pretty shy, private person. If something happened to me, I would put it in 1862 and do that kind of thing as a cover. I think most novelists or short story writers do that kind of stuff. But starting with a record I made called 'Ashgrove,' I started making it a little more like, ‘Okay, this is me.'"

Harlan County Line talks about one particular woman that only has a relationship with a musician whenever that player comes through town to play. Alvin has played the role of that stereotypical long distance lover himself. "Sure, he said not proudly," he affirms. "I've been on the road for 31 years. These things happen. But in that song, he gets left."

Although those "things happen," Alvin nevertheless loves the musician's life. Make no mistake about it; Alvin has paid his road dues. From his time with the pioneering rockabilly band The Blasters, to a stint as X's guitarist, as well as his on again/off again role in the folk X offshoot, The Knitters, Alvin has put thousands of miles on the old speedometer. Most the time these days, though, he's the front man, leading his own band. After all, he's been making solo music since way back in 1987.

"Gigs I love," he says. "That's my religion. If you get the right audience the right night; the band's happening, you're playing good. That's transcendental for me. When I'm onstage playing live, everybody from Chris Gaffney to Amy Farris to Big Joe Turner – they're all alive and they're hanging around."