After 14 years with a slew of infectious hits – Easy on the Eyes, Boy Meets Girl, Girls Lie Too and Poor Poor Pitiful Me – Terri Clark's 2009 "The Long Way Home" took a different tack.

Recorded during her mom's brave, but ultimately unsuccessful, battle with cancer (she passed away on Easter Sunday, 2010) it carried much darker undertones than any of her previous efforts, coming at a time when everything in her life seemed to be falling apart.

"'The Long Way Home' was pretty introspective," reflects Clark. "I was going through a lot emotionally. There was a lot of struggle in my life when I recorded that album, when I wrote the songs for it. There was a lot of self-searching, soul-searching, thought and just stress. My mom was sick for 3 1/2 years, and I had just left my record label. I was in a relationship at the time that was a struggle from Day One, so I had a lot of struggle in every area. That album was made during that time, and I think that maybe people really connected with it on an emotional level because we all go through things like that." 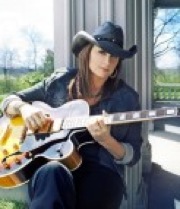 "The title is a bit of a fusion between me returning to my roots in Canada on a personal level and focusing a lot of my headlining career there," she explains. "I wrote some songs on the album that are a little autobiographical. Northern Girl is one of them. It's about being raised north of the Mason-Dixon Line and how the culture differs from place to place, but being proud of being Canadian and being from the northern culture."

"There's another song on the album that Trooper a Canadian band originally recorded in the '70s that's been sort of a Canadian summer staple for years and years at classic rock radio – Here for a Good Time, the latest single. There are just some references to the north that made me feel like I'm more tethered to my roots now than I have been, personally and professionally."

"The Wings part of the album sort of lends itself to the fact that I'm feeling a lot of creative freedom these days being more independent and feeling a lot of the pressure's been lifted. I'm doing things because I want to do them now, not because I have to. I also lost my mum last year, and I feel like she sort of graduated to a different status in the spiritual realm and earned her wings. She and I had a very close relationship, and there's that letting go theme on a couple of the songs – Smile, mainly. It's about how parents and children let go of each other throughout the evolution of life and death. I know that's a long-winded answer, but it's not that simple to explain."

The creative freedom and independence to which Nashville-based Clark refers, is a result of her status in the U.S. as an independent artist – having severed her ties with BNA, her major American label three years ago – and the luxury of being able to visit family back home on a more regular basis.

"I actually have a second residence in Canada, and I spend most of my summer there," she says. "I've taken up fishing, and my family's all around the same area that I've got a place, so for personal reasons I spend a lot more time there and professionally, most of my touring is there."

"I do still tour the U.S., mostly in an unplugged type of format – I do solo shows completely by myself. We do some band shows here too, but a lot of my touring has sort of evolved into that type of format. I can still play in the States anywhere I want to and have people show up, and it's just a great feeling to be able to still do what I do on both sides of the border. We're planning on bringing the show to the UK next year too, so I'm looking forward to breaking into a new market at this point in my career."

The modern Nashville scene is certainly different from the one the sassy Stetson, skirt and cowboy boot-clad songstress set alight in 1995 with her fiery debut single, Better Things to Do.

Has Clark changed her sound at all in order to reflect the current trend for not-too-country-sounding-country? "Yeah, I think some of the tracks are a little bigger-sounding. They have a little more of that layered effect. Some of it musically revisits some of the tracks on my earlier records, and I had a good time because I really enjoyed producing some of the songs because they just lent themselves to that bigger mainstream feel."

"But then there are also songs on the album that have triple fiddles and steel guitar and that are super country – not something you hear a whole lot of these days on the radio. I've always remained true to my roots, which is another reason for the title, and country music should be country music, you know? I like to have songs on every record that leave no doubt."

Not only does Clark now spend more time north-of-the-border (she is gearing up for a 2-month cross-country jaunt kicking off in Halifax, Nova Scotia on Sept. 30), but she has also started to address her origins through song – most notably on the aforementioned, Northern Girl.

"It did really well," she says. "It went Top 10 in Canada, and I'm still hearing it a lot on the radio. We didn't put it out in the States; it's a little regional, although they'll play southern anthems all day long... When we wrote the song, it really came from the heart; it was very authentic-feeling and a genuine process that I wanted to talk about. I wanted to write an anthem about where I'm from – I'm really proud of my heritage. In song, that's definitely the most blatantly autobiographical, geographical kind of thing that I've written for sure."

"This album's a little more light-hearted," concludes Clark. "I feel like having come out of the other side of all of those things, somebody's just kind of reached into this dark room and flipped all the light switches back on. I'm giving myself permission to live and be free and have fun and enjoy everything life has to offer again without worrying about what's going to happen around the corner."