Foster & Lloyd are back together again with their first studio album in 21 years, "It's Already Tomorrow." Sure, they've each had a lot of individual success, especially as songwriters. However, something special happens when these two talented artists pool their skills together. So, why now?

"We played a special event here in Nashville a couple (of) years ago," says Bill Lloyd. "We'd been asked to do a fundraiser for an organization called the Americana Music Association. We ended up writing some songs in particular for that event and playing live with a combo, and it went so well that we decided to start writing regularly. And it just sort of grew into, 'Wow. We should probably make another record.'"

This was not the first time the two had performed together since the last album "Version of the Truth," in 1990. Nevertheless, it was just the first reunion that led directly to a new CD. 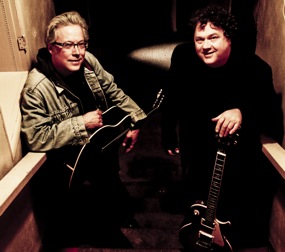 "We actually did things together over the years, other than the first five years we were apart," Foster explains. "We were so busy with other things. After about five years, we'd get an invitation to...I remember there was a music festival in North Carolina that had me on one stage, and Bill on a different stage, and they figured it out and they said, 'Will you guys stay over an extra day and play a Foster & Lloyd set? And we were, like, 'Yeah, absolutely.' It made all the sense in the world. We did that. And there would be some charity events now and again, where we would reform or a Bluebird Café thing."

Camaraderie is all well and good, but Foster & Lloyd have an even stronger bond together. "I think what really prompted us to get back together was the songwriting," says Foster. "Writing for that particular thing all of a sudden just sparked something, and the songs felt right, and it felt like it was time. 'Hey, let's write some more and see where this goes,' and then after a month of writing together, it was painfully obvious that we needed to make another record."

"That's how we became friends," Foster continues. "Because we were the two young bucks at the publishing company, and truly, neither one of us had good air conditioning in our apartments."

One of the big attractions for writing together again as Foster & Lloyd was creative control. "When we wrote back in the late '80s, early '90s when we were doing our duo, we co-wrote and we co-produced our own records," Lloyd says, "so we were always used to working together. So when we started co-writing again the second time around, it looked very much the same."

Foster & Lloyd released three studio CDs in three years and had hits including Texas in 1880 and Crazy Over You.

"I think one of the things that Bill and I have always said, is that there is a third animal; it just happens whenever we write together," Foster explains. "Originally, there was always sort of a smartass vibe to the way we wrote. I think we both liked being clever. We both have a sense of humor. And I think that that's still very evident on this new record."

Truth be told, Foster and Lloyd are no longer the 'young bucks' they once were. Aging, however, is neither a good nor a bad thing for songwriters. It's just different. "I think also we wrote some things this time around that we couldn't have written because we've had life experiences that we didn't yet have back then." Foster elaborates. "I mean, back then we might have written a love song like "Sure Thing." And it's very plain. It's about a guy who's trying to point out to some woman who's just hurt that, 'I'm not the guy that's gonna hurt you. I'm not that guy. And you have full permission to let go.' This time we wrote on that theme, but we also wrote with the experience of knowing what you know when you're 50, that you didn't know when you were 25. Also, there are some things about kids and the passage of time, and just thinking at it from an angle that we didn't have in our arsenal just because we didn't have the life experience."

One of the album's funniest songs is That's What She Said. It sure sounds true to life, as it talks about the sort of guy whose sense of humor can sometimes go too far and get him into trouble with his mate. Certainly, witty songwriters like these two have talked themselves into a few squabbles with women by telling one joke too many.

"The funny thing for us was that we wanted to turn it on its head," Foster explains. "Just the realization that, if you're in a relationship and that's sort of your way of using comedy to sort of hit on your wife, she's going to be, like, 'Give it a rest.'"

"My favorite part of that song is the cricket sounds," Lloyd adds.

"Yeah, including cricket sounds in the middle of a break," Foster concurs. "My favorite part is that we rhymed 'entendre' with 'longer,'" Foster continues. "We completely hillbilly-ized it."

Another witty section comes from Can't Make Love Make Sense where they sing, "Let me help you get out of the Freudian slip." "There was a debate at one point, 'Should we take that out?' Foster recalls, 'Is it too much?' And we were like, 'Nooooo.' The funny thing is that in many instances when you're writing songs, most of the time you're sitting around and you're just trying to really come up with something that really is meaningful and oftentimes poignant. Or you're trying to come up with something that's just fun. I think a lot of times there's always that, 'that's what she said' kind of joke that goes along with that kind of writing, and then you edit out later 'cause you're just trying to make laughter get you past the next hump. As a writer, you're trying to make it work. And I think one of the funny things about Bill and I is that sometimes we'll write those things down in the margins and then come back to them and say, 'I really think this belongs in the song.'"

Foster & Lloyd has a distinctive sound, as well as a unique writing style, however. They have as much jangle rock in their music, as twang. "Our sound is basically what we like," says Lloyd. "Both Radney and I like a lot of different kinds of music. When we get together, we always say that it's the third thing that happens when we work together that doesn't quite sound like my solo stuff or doesn't sound like Radney's stuff, but it's a third thing."

"We never realized that you weren't supposed to take influences from The Clash and The Everly Brothers and The Byrds and put them all together," says Foster.