Colter, Shooter team with producer to get inside Waylon's songs

Waylon Jennings' influence on music is impossible to overstate. He helped shape early rock and roll as Buddy Holly's bassist in the late '50s. He had hits within Nashville's country music establishment in the '60s. He was instrumental in launching the Outlaw movement in the '70s, and his songs continue to resonate for new generations of country music fans and artists. 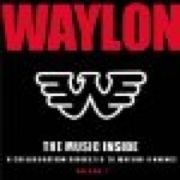 Jennings was the first to demand and receive creative control over his recordings; his renegotiated RCA contract was similar to the era's rock artists, and it paid off with classic albums like "Lonesome, On'ry and Mean" and "Honky Tonk Heroes," which helped to define country rock. And it seems fitting that country's two most transcendent superstars, Jennings and Willie Nelson, should be the ones whose duet album, "Wanted! The Outlaws," would notch country's first platinum sales figures.

Nine years to the week after his passing from diabetic complications, Jennings is again the deserving focus of a tribute album to honor his legacy.

"The Music Inside: A Collaboration Dedicated to Waylon Jennings, Vol. 1" becomes the third Jennings tribute album since his death in 2002, joining "I've Always Been Crazy" (which featured contributors like Metallica's James Hetfield, John Mellencamp, Ben Harper and Kenny Chesney) and "Lonesome, On'ry and Mean" (with Guy Clark, Dave Alvin, Robert Earl Keen and Kris Kristofferson, among others), both out in 2003.

Jennings' widow, Jessi Colter, and son, Shooter Jennings, both contributed to "I've Always Been Crazy" - Colter with her version of Storms Never Last and Shooter, fronting his band Stargunn, on the title track - but were not involved in the planning or preparation of the album itself. When producer Witt Stewart approached Colter three years ago about working on a third Jennings tribute project, she listened politely to his pitch, but had largely made up her mind to decline.

"It sounded okay, but I was in no mood for another tribute album," says Colter from her home near Phoenix. "Shooter and I had worked fervently the first two years to do a major concert or a film like The Last Waltz, and the deal was never right."

Colter's resolve wavered as Stewart outlined his reasons and ideas for the project (including his online plans through his now completed ScatterTunes web site and donating some of the proceeds to South Plains College in Texas, where Jennings had done a benefit concert), but she was convinced to get involved after Stewart flew himself and Colter to see Shooter perform at BamaFest and try to get his blessing as well.

"When Whit saw Shooter sing Belle of the Ball acoustic, on Waylon's birthday, Father's Day, he said, 'That's how I'd love to see him,'" says Colter. "He just busted down."

Colter was further impressed when Stewart didn't intrude on Shooter after his show, even following his entourage to a Flaming Lips show ("I fell in love with the Flaming Lips, frankly," Colter admits). All things considered, including Stewart's obvious passion for Jennings, Colter was compelled to green light the project.

The talent roster on "The Music Inside" is a blend of time-tested veterans (Kristofferson, Patty Griffin, John Hiatt, Trace Adkins) and gifted rookies (Jamey Johnson, Sunny Sweeny, Chanel Campbell), all working on a set list comprised of some of Jennings' best material. One of the marquee moments on is the reunion of Alabama on Are You Sure Hank Done It This Way, the group's first new studio recording in more than a decade.

"Witt did that," says Colter. "He ran into Teddy Gentry, and he said Randy (Owen) was cancer-free and had said, 'It'd be fun to do some music.' Witt drove to wherever he lives to talk to all of them, and asked them, 'Would you consider coming together for this?' Witt started talking about Waylon, and Randy talked about how he loved his guitar playing and how they'd been doing Waylon's songs from the Bowery in Myrtle Beach."

Another stellar moment is Hiatt's reading of Just to Satisfy You, which turned into an actual duet with Jennings.

"It wasn't planned," says Colter with a laugh. "Just to Satisfy You had been cut by another artist, and it just didn't have the excitement it needed. John's manager said, 'Would you like John on the record because John would love to be on the record.' So, John went in there, and I just loved being there. They got it going and what a feel, and then Witt came over and said, 'Wouldn't it be cool if it worked to have Waylon there at the end?' That's all that was said. Nothing was tracked to fit the other track. Then, we had to get the rights; they wanted a lot of money, but I said, 'I'd love to have this if you'd give us a good rate.' And they did. And it fit perfectly. It's amazing! I wouldn't have thought it; Waylon's punch is more on the beat, but there it is."

Jennings surfaces on his own tribute again with a powerful acoustic reading of Go Down Rockin', while Colter duets with newcomer Sunny Sweeney on one of Jennings' most enduring classics, Good Hearted Woman, and Shooter contributes a heartrending spin on Belle of the Ball.

Colter admits that it's not only difficult to sing Jennings' songs, it's equally difficult to hear other people do them. "The whole thing's hard because I don't want to hear anybody but Waylon sing them," says Colter. "The way all the artists have been has really helped me. I could never spearhead a reflective project like this. It's too emotional. I don't know if the cut ever really heals up. I know I'll see Waylon again, so all is good."

The "Volume 1" addendum to the album's title is the tip-off that Colter and Stewart have designs on making the "Music Inside" into a series - several artists were left off "Volume 1" because of timing issues, including Bob Seger, who wrote a song with Jennings.

The plan at this point is to release two more volumes, the second slated for June 14 (on the eve of what would have been Jennings' 74th birthday) and the third to come out on Oct. 25 (the eve of Jennings and Colter's wedding anniversary), release timings that were almost accidentally appropriate.

"It's been that way the whole album," says Colter. "When you don't have an agenda, and you let it lead you...I think God's had His hand on this. This came along, and it was just blessed."

Given Jennings' extensive catalog and the number of artists who have been (and who will yet be) affected by his songs, his guitar stylings and his uncompromising artistic integrity, Colter admits that we'll most assuredly be talking about Jennings for a very long time.

"He had one of the great vocal chambers of our century," says Colter. "And he actually had chronic bronchitis; it wasn't like he was coughing all the time, but that's what he was told early on. He had such lung power and such wind, I thought, 'If you ever heal up that echo chamber, you'll be in trouble!' He was one of a kind...how often does one of those iconic personalities come along? He was a genius, what can you say?"