Peter Rowan carves out his legacy

Befitting his status as one of the most gifted lyricists of the past four decades, Peter Rowan is at no loss for words as he talks about his Peter Rowan Bluegrass Band and its recent debut release, "Legacy" on the Compass label.

"It feels like coming home, and it feels like I've learned something along the way," he remarks from his current home base in the San Francisco area, although he notes with some irony that the band grew out of a situation where "I was basically homeless…living in a Buddhist temple." 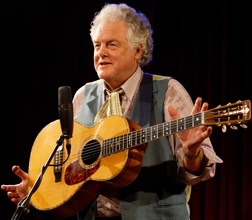 Paul Knight, a frequent sideman on bass over the course of Rowan's more than 40 years on the American music scene, helped him find a place to live and invited him to the regular Sunday afternoon bluegrass sessions Knight hosted at the Station House Café in Point Reyes. Also living in the area and attending the sessions were banjo master Keith Little, a veteran of major bands including the Country Gentlemen and Ricky Skaggs' band Kentucky Thunder, and multi-instrumentalist and singer Jody Stecher, a mainstay of the early New York City bluegrass scene and widely known for a series of sterling old time duet releases on Rounder with his wife Kate Brislin.

"We started playing, and I was amazed because Keith and Jody both knew so many songs, and I just let them sing, I just listened to what they were doing, and I would find a harmony part…and it was all traditional bluegrass, from the Stanley Brothers to Bill Monroe and all that stuff…When I heard the way those guys sang and played, being both singers, they've got a real appreciation for melody and…basically, understanding how to play with lyrics."

Rowan, of course, was no stranger to bluegrass. His first major exposure came as guitarist and lead singer in Bill Monroe's Blue Grass Boys in the mid-1960s, followed by his 1973 collaboration with David Grisman, Jerry Garcia and Vassar Clements under the Old And In The Way banner. Rowan had previously worked with Grisman in the acid rock band Earth Opera and also rocked with Seatrain, a band that included another Monroe alum, fiddler Richard Greene.

Rowan recorded a number of projects over the years with his brothers, Chris and Lorin. And, of course, he achieved immortality of sorts by penning the iconic title track of "The Adventures of Panama Red" for the New Riders of the Purple Sage. He spent several years on the periphery of bluegrass, partnering for a time with Dobro wizard Jerry Douglas and, for most of the past decade with guitar virtuoso Tony Rice.

In describing the sense of "homecoming" he's experiencing, he mentions one song from the album in particular Father, Mother.

"My brother Chris and I wrote that chorus on the day my father died, and it was really what we sang that whole weekend, and have sung at other passings of people. I was feeling the groove so much with this little bluegrass outfit that I was able to complete the song – I mean, it was wanting to be a bluegrass song…but it was a first step for me to kind of tell the truth. I'd been playing with masks for all my whole musical career…I felt as excited about playing with these guys as I did about playing with Grisman and Garcia, just because of the love for the music and, specifically, the singing really turned me on. And so, it was easy for me to complete that song as a kind of bluegrass ‘graveside waltz', and I mean, I think Carter Stanley would be proud of it…and I know Bill Monroe would say, ‘Pete, you may think you can leave bluegrass, but bluegrass will never leave you.'"

"I grew up about 12 miles from Walden Pond, so the locale of Boston, you know…and the spiritual traditions - the Transcendentalists, the early publication of Buddhist text - (that) came out of the Boston area with Emerson, Thoreau and those guys. So, I kind of tuned into that. But there was something deep down inside of me that wanted to play that bluegrass music."

Still in his teens, he started hanging out with the hard-core bluegrassers who were packing local venues like Club Passim and Hillbilly Ranch – brothers Everett and Bea Lilly, banjo picker Don Stover, fiddler Tex Logan (with whom he would play in Monroe's band), and the extraordinary mandolin player and tenor vocalist Joe Val – "they were the real deal."

"(Joe) taught me all of Ira Louvin's parts, the Louvin Brothers stuff, and then we got into the Blue Sky Boys stuff. Joe really knew where all this stuff came from, whereas the college bluegrass pickers were playing kind of a mixture of different things, and everybody was having fun with it, you know. But Joe, he knew all the stuff, so I learned all the harmonies first, then I learned the leads and he sang the harmonies, and we played a few duet shows, played on TV locally, played around up in Boston, at those clubs…he was my biggest booster, he loved me."

Like many young folkies of that era, Rowan had become enraptured by the blues artists like Lightnin' Hopkins whose records were starting to become widely available, but he was looking for more, looking to strike a different chord.