"I was able to reach depths inside me that I didn't know I had," says Jason D. Williams of his new album Killer Instincts. Speaking from New York City the night after a media showcase for his new Rockabilly Records release, the 51-year-old boogie-woogie piano-man was effusive in his praise for producer/ alt.-country singer-songwriter Todd Snider, "It's a piece of art that came from within that Todd was able to get out of me." 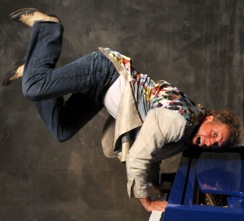 Although Snider helped Williams expose his zanier – at times more bohemian - lyrical sensibilities, the other creative specter hanging over the project is the Killer himself – Jerry Lee Lewis. Ever since he left Eldrid, Ark. at age 17 to go on the road with Sleepy LaBeef, Williams has stocked his onstage repertoire with big pleasing slabs of Lewis's material.

Moreover, in 1996, KNIX Magazine reported that Williams purchased some of JLL's old clothes to wear onstage while he pounded the living boogie-woogie out of his keyboards. The explanation for this behavior is usually found in the oft-repeated rumor that Williams, who was adopted, is the Ferriday Fireball's illegitimate son.

Indeed, Williams addresses the rumor with the very first track on Killer Instincts, the piano-pumpin' "Like Jerry Lee," which features the refrain: "I don't know if he is or he isn't / I coulda found out one time but I didn't. I figured either way would be more than I could stand."

"Well, the truth of the matter is: that's as truthful as it gets," Williams soberly explains. "There couldn't be anything else added to that or anything. Now, I'm still alive only because I haven't carried him a watermelon this week, and I don't think he'll ever hear this record if his daughter Phoebe doesn't play it for him." (Neither Lewis nor his management could be reached for comment.)

"Look, on the record - Jerry Lee, I've admired him, his energy and his talent for many years," Williams freely admits. "I think he is the greatest, and I like what he's done, but the thing of the kinship between us, that's as truthful as it gets. I could have found out once, well, I kind of did, but I didn't want to."

So, do he and Jerry Lee share a genetic code? No one really knows, and it's not likely to be officially resolved anytime soon.

This much we do know. Musically, Williams is more than a Lewis tribute act. Elements of old-time jazz and semi-classical music inform his non-boogie numbers. Further, the singer's direct mentors aren't exactly household names. "Well, a gentleman I was very close to early on was Memphis Slim, Peter Chapman," Williams explains. "He was a dear friend of mine. [Blues and boogie pianist] Booker T. Laury was another. The old boogie-woogie guys mainly influenced me as much as anything."

That said, when he lays down that cut-time rockin' boogie, kicks back the piano stool and practically demolishes a piano, it's Jerry Lee Lewis time, and his fans know it.

Early on, while recording for MCA and then RCA, Williams received a career boost when he appeared semi-regularly on TNN's daily variety/talk show Nashville Now. The concept was inspired. Hosts Crook and Chase would introduce Williams and the curly-headed blonde would wow their audience by bashing out one of Lewis's classic tunes. Then, during the sit-down portion of the show, when asked who his influences were, Williams would reply with tongue firmly in cheek, "Beethoven, Bach and Mozart." When cornered with a question about Jerry Lee Lewis, Williams would drolly respond, "Well, he's good too, but someone's got to keep the ball rolling."

But the young entertainer didn't just sing and play like Lewis, he also parodied the legendary hit maker's famous ego. Once, when asked where his next gig was, Williams puckishly announced that he was playing at the "world famous London Palladium," the Houston Astrodome or Caesars Palace. The studio audience laughed uproariously because the honky-tonks and dives where he was actually appearing were superimposed on the television screen as he spoke.

With Lewis taking what could be his final bows on guest star laden albums, fans of the pumpin' piano style feel that Williams has finally earned the spotlight. None of that has translated into success as a recording artist yet. After one album with RCA, he signed for one album with Sun Records – little more than a mail order service at the time. "Yeah, Elvis Presley went from Sun to RCA," Williams chuckles, "but I've always done things a little backwards."

Williams opines that his current album is his "400th chance to do something" and boasts that Snider is the only one whoever successfully recreated his onstage persona in the studio. "I've always been really proud of my energy in the show itself, but for Todd Snider to capture that where RCA couldn't capture that and Sun Records couldn't capture it and a lot of independent labels couldn't capture it - they had the names and the producers, but I guess it took a schizophrenic guy like Todd to come up with the formula."

So how did they meet? "We actually live close to each other in Memphis, Tenn. We had crossed paths a time or two then I eventually called him and he said, 'You know, I've been waiting on this phone call for 15 years.' I said, 'I've been wanting to make it for 15 years!' So, we got together in Nashville at Blackbird Studio and man, it was just magic. He had 50 songs or so that we were supposed to do, but before we could get to 'em, I just started making up songs in the studio, and he said, 'Wait a minute. How long have you had that?' I said, 'I just made it up.' So he said, 'Wow, this is great. Let's go this direction.'"

Which songs were created on the spot? Mr. Jesus and Crippled Down, Williams recalls. "I would come up with things like the song, You Look Like I Could Use a Drink, and then Todd would elaborate...he came up with just the ends or the middles of some of these songs."

Asked if Snider and he built tracks or recorded live, Williams was adamant. "Absolutely live off the floor! It was the most unique and free-flowing feeling I've ever had. Dan Baird with the Georgia Satellites on guitar and Keith Christopher on bass and guitar, golly it just all worked. I'd come up with an idea, and we might sit back until we got it refined for 15, 20 – 30 minutes, then Todd would go out back and kind of get refined himself, and then he'd come back, and we'd get it going and record it just from start to end."

Now that he has discovered his true in-studio persona, Williams - an amateur birdwatcher and art enthusiast - offers a final assessment. "I once read that Paul McCartney was never pleased with any of his stuff. But for once, without sounding overconfident or arrogant or anything, I have to say, I like it. I do, I like it, and I've got a lot more of that in me."