The self-referential song has been a stock-in-trade for country music since its earliest incarnations. From Johnny Cash to Willie Nelson to Roger Miller and beyond, from 78s to mp3s, country artists have enjoyed writing and singing, directly or tangentially, about themselves. 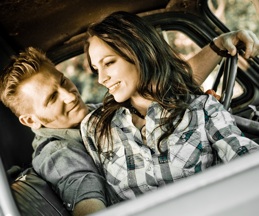 So, it doesn't seem like much of a surprise that Rory and Joey Feek, the Nashville husband and wife duo doing business as Joey + Rory, opened their sophomore album, the cleverly titled "Album Number 2," with the song that serves as its title track.

The song is a spritely ode that exhorts the music-consuming public to purchase J+R's follow-up to their 2008 hit debut, "The Life of a Song." The surprise is that the song predates Joey + Rory's first album by nearly four years; not only did Rory Feek not write the song for this album, he didn't even write the song for the duo.

"That's what makes it kind of neat. I wrote that song with a couple of buddies five or six years ago," says Rory from the pair's bus as they wind their way through their current tour. "We wrote it for Blaine Larsen, who was recording his second album, and I was producing that album. We were writing songs for Blaine, and he had had a hit song, and so we wrote every bit of that lyric for him."

"But I don't think he was that into it, and his record company wasn't into it. Now, five or six years later, Joey and I have all this happen, we have a hit record, and every lyric works for us without changing a thing. All that stuff I wrote, I meant it back then, I just didn't know we were going to be living it."

That same day, Rory wrote A Little More Country Than That, which Easton Corbin just took to the top of the country charts. As Rory notes with a laugh, some songwriting sessions are better than others. "That was kind of a big afternoon for us," says Rory. "We just didn't know it for five or six years."

There's a lot of unknowable fate in the Joey + Rory story. A decade ago, Joey Martin attended a Nashville songwriter in-the-round night and found herself captivated by the songs and sincerity of one of the participants, up-and-coming tunesmith Rory Lee Feek. Two years after that fateful night, Joey met Rory for the first time, and the chemistry was undeniable; they were married within weeks.

Rory was already an established songwriter, and Joey was pursuing her singing career when the pair met and married (she also opened a small restaurant with Rory's sister Marcy). Rory founded Giantslayer Records in 2004, and Joey released her first album, "Strong Enough to Cry," through the label the following year, as well as his own download-only solo project "My Ol' Man," but nothing much happened with either album.

One afternoon in 2007, John Bohlinger, Rory's friend and collaborator, came to the restaurant after a writing session and heard Joey sing. Two months later, he called and asked the couple to meet him for coffee in Nashville, where he made a rather unexpected suggestion regarding the CMT talent program, "Can You Duet."

"He said, 'There's this new show called 'Can You Duet,' like CMT's American Idol, and they're looking for the next great duo. You guys should go out for it,'" recalls Joey. "Rory and I looked at each other and laughed. We said, 'You guys who?' He said, 'You guys. Believe me, you're the real deal, you're a real live couple, you've got a great story.' We learned how to sing together, and we went from 5,000 down to the final 3, and that's what caused us to be a duo together. It was one of those things we never saw coming, but we're so thankful that we took that chance, and here we are."

Singing with Joey was not really something that Rory had considered seriously. He performed sporadically, considered himself primarily a songwriter and was content to remain well in the background. The other major roadblock was simple: Rory was petrified of performing in front of cameras.

Rory set his fear aside, the pair rehearsed singing together and tried out for and were accepted as contestants on the show, where their talent combined with an irresistible back story made them fan favorites and propelled them to a third place finish in the competition. Their exposure from "Can You Duet" earned them a sizable fan base in short order and sparked plenty of label interest; Sugar Hill got their signatures.

After the positive start with their debut, the Feeks knew what they wanted from "Album Number 2."

"I think the main thing we wanted to do was go a little bit deeper," says Rory. "On the first album, we tried to share our lives and things that move us, whether they're funny things or industry things or heartfelt or faith-filled things. On this record, we wanted to go deeper. Joey really wanted me to sing on this album, so we added some of that; we did a couple of duets, and I sang one song."

For all the importance that the industry imposes on chart position and sales numbers, Rory is quick to point out that the response to "The Life of a Song," and its big single, Cheater, Cheater had nothing to do with the way he and Joey approached "Album Number 2."