Tift Merritt shoots for the moon

A significant number of artists would be happy to notch two great consecutive albums. With the release of her latest, "See You on the Moon," Tift Merritt has managed to release four stone winners in a row. 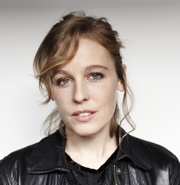 She accepts with a demure, but clearly grateful "Wow, thank you so much," but perhaps holding back from self-congratulation because she's still striving for greatness from a personal perspective.

Later, Merritt apologizes for eating watermelon in the middle of the phone call. Her apology is both unassuming and sweet and indicative of her completely open personality.

Those are qualities shared by the albums she has released. From her acclaimed debut, 2002's Americana-laced "Bramble Rose" to her soulful and twangy 2004 follow-up "Tambourine" to her magnificent third album, 2008's "Another Country," Merritt has blended her unassuming sweetness with a penchant for very personal storytelling and an old-soul wisdom to create a catalog of startlingly intimate, yet beautifully universal songs.

"That's just the way I do things," says Merritt of her writing style. "I wouldn't know how to do it any other way. I'm not going to ask people to listen to things that don't matter to me. Why would it matter to them? As much as I believe in writing from such a personal, first-person point of view, I believe in songwriting, too, and I believe by the time you give something away, it becomes something of its own. It's not just about me anymore. It's not a page from my diary, it's just a picture. I don't feel any reason to hide."

"See You on the Moon" may be the pinnacle of her career to date in that regard. The album is a triumph of Merritt's emotionally invested songwriting and her band's uncanny ability to translate it into a soundtrack that perfectly matches her mood, from heartbreak to joy and every stop in between.

Between Merritt, her stellar band (husband/drummer Zeke Hutchins, guitarist Jay Brown and bassist Scott McCall), atmospheric producer Tucker Martine and guests including violinist Eyvind Kang, pedal steelist Greg Liesz and My Morning Jacket vocalist Jim James, everyone involved in making "Moon" was experiencing the best and worst life has to offer, which are documented on the album they made together.

The process of making "Moon" began with Merritt's songwriting, which took a slightly different turn from her last album, "Another Country." For that one, Merritt retreated to an apartment in Paris to contemplate her next steps after breaking with Lost Highway Records and removing herself from the touring grind. She fully intended to take a break from music entirely, but the apartment she sublet had a piano and before long, the songs started flowing spontaneously.

Although the physical process and the intent of songwriting was different between "Another Country" and "Moon," Merritt insists that the songs shared a similar evolution creatively.

"I feel like I learned so much from the time that I disappeared and wrote and made 'Another Country,'" says Merritt. "I feel like I wanted to take that pure place and keep going with it without having to flee my life to do it. It was as simple as I had a month off from tour a couple of times, and I went away to write by myself with an idea in mind that I wanted to write on a really elemental level. I wanted to get past anything superfluous or not useful or angsty. I just wanted to be open and get right down to it and not have anything there that wasn't important. And I think we stayed with that tenet once the songs came and we went in musically. I feel like maybe hopefully the pond got deeper without us understanding it or laboring over it on this record."

It was during Merritt's second writing session that "Moon" began to reveal itself as a developing album, and she started to glean that the album was not only coming together, but might actually be about something in a larger sense.

"I came away with Feel of the World and See You on the Moon and Things That Everybody Does and maybe Six More Days of Rain," says Merritt. "I think when you're writing, the heart of the record needs to present itself and its pulse, and I feel like once I had those songs, I really knew what was going on."

Feel of the World is certainly one of the songs that defines the heart of the CD. Merritt began writing with the intent of detailing the physical things that her terminally ill grandmother might miss and as a way of coming to grips with the fact that she couldn't be with her in her final hours. The song veered down an unexpected and profoundly moving path.

"My grandmother was dying, and my father, who I'm really close to, was at her bedside," Merritt recalls. "I was thinking about the two of them and wishing I could be there and do something to help or just be present in that moment, and I guess the only way I could do that was to write about it."

"I just started thinking about my grandmother's life and the tactile things of the world that feel so good, like good paper or a good wood dinner table or the rough hewn edges of the world. I ended up writing this song and when it was finished, I realized it was really about my grandfather, who died in the '70s, reaching out to my grandmother. It was him, saying 'I'm right here, I'm waiting for you.' It really meant a lot to me on whole bunch of different levels to be part of that interaction. I don't know exactly where that song came from, and I don't feel ownership of it. I feel like I'm a part of it, that's all."