Award-winning country singer, Wade Bowen, has been a mainstay of the Texas Country music scene for nearly a decade. He recently joined the likes of Willie Nelson, Merle Haggard and Asleep at the Wheel by releasing an album of live material recorded at the famous, Billy Bob's in Fort Worth, Texas.

The past year has been busy for Wade Bowen. The native of Waco, Texas has picked up a number of awards, including Lonestar Music's Live Act of the Year, undertaken a grueling touring schedule, and appeared at the Grand Ole Opry. 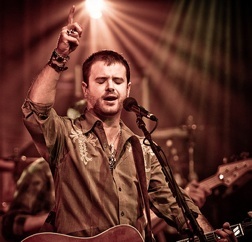 "Two thousand and nine was a huge year for us," said Wade in an interview with the Waco Tribune-Herald. "We performed at the Grand Ole Opry. We had our first West Coast run. We had record crowds and we won some awards that were fan-based and fan-oriented. We recorded the live album (Live at Billy Bob's), and I got to write with Guy Clark."

Trouble from Wade's 2008 album, "If We Ever Make it Home," also cracked the Top 20 on the CMT countdown and debuted at number 1 on CMT's sister channel, CMT Pure.

Bowen began his professional musical journey in 1998 with the band West 84 (named after the highway linking Waco with Lubbock, where he attended Texas Tech University), before leaving them to go solo in 2001. His debut album, "Try Not to Listen," was released independently by Bowen in 2002.

"West 84 was just an early name for the project back then," he explains. "I never really changed anything. I just put my name out front, and it eventually drifted away. I never really liked that name, and most of the guys in that band wanted to do it for a while, but didn't want to do it forever. So, eventually, it just made sense to drop the name completely. Matt Miller is still playing guitar with me, and he is one of the original founding members. Twelve years and counting..."

"I started singing as a little kid," he says. "Music was always around our family. I always wanted to do this as a career - just took me a while to figure it out. I'm still trying to figure out what it takes."

"My mom and dad were my main influences growing up. I pretty much try to do everything like them still to this day - always have. They are the ones that gave me a chance to dream big and chase after them."

One of these dreams was fulfilled when Bowen performed at the Opry in October 2009. "It was a dream come true," he says. "I had always wanted to play that stage, and they just could not have been any nicer. I hope to go back. They did say they wanted me back so I guess I did okay."

A lot has been made about the current state of the country music scene in Nashville; that artists are rejected for being "too country." "The scene is fine," he says. "More people just need to see through the bad and find the good. There is plenty out there. The music industry is just waiting for the change to happen, and I think it will soon. Cool artists are out there."

"The Texas scene is just a bit more honest and rowdy because we pattern everything around our live show instead of radio out of necessity," he explains. "I love Robert Earl Keen, George Strait and Willie Nelson."

"I try hard not to define my music and to let others do that - I feel that is the best way to get pigeon-holed. I pride myself on being able to do any kind of music I choose from heavy rock and roll to good ole country music. I think my intensity is what stands out. I feed off of lyrics and passion for music, instead of the party and the road."

Noted for his live performances, Bowen scooped the prize for Live Act of the Year at the 2010 Lonestar Music Awards. "Winning that award was so cool for my band," he says. "I'm so proud of how hard they work and was glad to see them win that. They are good guys. I think people really like our honesty on stage and how much fun we have playing music together."

What does Bowen enjoy most about being on stage and out on tour? "I love the fans singing the songs - that's always cool for me. I love talking to my kids on the phone as well because they always make me laugh and cheer me up. I also enjoy the different restaurants we get to experience all over the country. There are some very good places out there."

Bowen and his band cut the second live album of their career (the first was "Blue Light Live" in 2003) at Billy Bob's - "the largest honky tonk in the world" - in November 2009. Unlike other live CDs recorded at this legendary venue, Bowen's was released as a deluxe double CD/DVD package. "We put almost the entire show on there," he told the Waco Tribune-Herald. "The way things are going in the music industry and in the economy, we wanted to give people their money's worth."

As well as some bona-fide Bowen classics, including If We Ever Make it Home, God Bless This Town, Nobody's Fool and Resurrection, the record also contains two new songs, Bottle into Gold and the crowd-favorite, Matches.

"I just wanted to have some studio stuff on there so we can stay active in radio land while this album is being pushed," he says. "Most radio stations have a hard time playing live songs. This was also an opportunity for me to have some fun and try some different songs and sounds. I think you can hear that in these two."

It is now nearly 10 years since the release of Bowen's first solo album, and it would appear that all his hard work and dedication is starting to pay off. "My proudest achievements are playing the Grand Ole Opry, getting to do a tribute to Guy Clark, and then getting to write with him. As far as ambitions go, I just simply want to be here in 40 years and still matter to people. Music is important to me and everything I do, and as long as I'm somehow still involved, then I will be happy."