The Avett Brothers get darker

Since Scott and Seth Avett traded in the shredding indie rock sound of their first band, Nemo, for the front porch bluegrass vibe of the Avett Brothers nearly a decade ago, the North Carolina trio (Scott on banjo/vocals, Seth on guitar/vocals and stand-up bassist Bob Crawford) has come to define the DIY ethic. 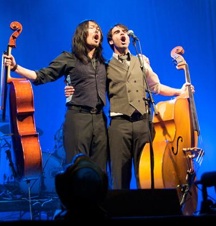 The Avetts recorded and released their own albums (10 full lengths and EPs over the past 10 years, including 2007's acclaimed "Emotionalism"), booked their own tours and negotiated their first label deal with tiny Ramseur Records 5 years ago.

The Avett Brothers altered their formula somewhat when they signed with Columbia, but not because of their newly established major label status. In fact, the trio already had close to 30 songs written before meeting with legendary producer Rick Rubin, who eventually helmed the sessions that resulted in their amazing new album, "I and Love and You."

"We had all but one," says Scott Avett. "We had started recording before we met with Rick."

The Avetts shook up their songwriting process slightly, crafting stripped down piano and drum demos and appointing them with whatever inspirations happened to present themselves.

"Seth and I had a lot of fragments, and then we met in the studio and attacked the songs in a rhythm," says Avett. "Instead of a song as a whole, we were taking the songs and doing them with piano and drums. The difference was Seth and I built the songs as demos in the studio, just the two of us, and we had instruments all around us, and we were jumping from instrument to instrument and learning what we could to make the demo song happen. That was a different approach than what we've done in the past. The first foot forward was very different and that approach maintained throughout the recording process."

Before the Avetts signed with Columbia, they had a series of get togethers with Rubin where the discussion was music in general, not necessarily the Avetts' music.

"The first meeting was very friendly, talking about music and mutual respect and it was very invitational," says Avett. "Rick is really good about not tying himself or you into anything, and if you're not feeling it, he's cool with that."

Once the Avetts got together with Rubin for the pre-production process, band and producer began winnowing the 30 demos down to a manageable number to take into the studio.

"We met at Rick's house 3 or 4 times with the 30 demos," recalls Avett. "Some of them weren't finished songs. Some of them we thought were finished, and he didn't. Some of them he maybe thought were finished, and we didn't. The first process was figuring out which songs we wanted to attack in the studio. We ended up agreeing on 17 or 18 songs to attempt and if we had more time, we would try more. It was almost like it decided itself, what songs were going to be agreed upon. Rick took an interest in certain songs and had qualms with others, and we just avoided the ones that anybody had a personal difference with."

Whether by virtue of inspiration, instrumentation or maturation, "I and Love and You" shimmers with a quiet intensity and glows with the moody country/folk rock warmth that marked the early works of The Band and Elton John. Avett cheerfully accepts those comparisons and offers a couple of his own.

"I'd also say 'Hunky Dory' from David Bowie, where piano drives the rock and roll sound, and also Neil Young in the spirit of the songs," he notes. "The piano is just as much a country instrument or an old time instrument as the banjo so we didn't really feel any different."

Lyrically, the themes on "I and Love and You" reflect the somber tone that pervades the country at the moment but not to a depressive degree. The album is obviously a product of current hard times, but also a certain sense of optimism that lurks beneath it all.

"When you spend so much time on the road, seeing the country in a hole, you get affected by it quite a bit," says Avett. "You start to feel like it's almost hopeless, then you get close to folks that help you push through that. I think this record has a lot to do with that."

The song Head Full of Doubt/Road Full of Promise sums up the sonic and lyrical balance on "I and Love and You" quite nicely. "That song was initially started by looking around at the bright lights and realizing it was all a facade, and there's really a lot of hardship and despair," says Avett. "At other times, or other parts of the day or other seasons, you're very hopeful, and it changes your vibe altogether. I think the record is hopeful, though dark."

The songs on "I and Love and You" hum with a hopeful solemnity and the lyrics are moodily and more globally introspective, which is something of a departure from the Avett Brothers' typical stomp-and-strum hootenanny. Still in all, the band's longtime fans seem to be embracing what Avett describes as a turning point for the trio, a creative fork in the road that they initiated and Rubin clearly helped to facilitate.