When last heard from, Charlie Robison released "Good Times " back in 2005 on Dualtone.

No new music since, and in this day and age with the music business in dire straits, waiting so long could be a death sentence for a singer. Fans move on and often aren't so ready to come back. 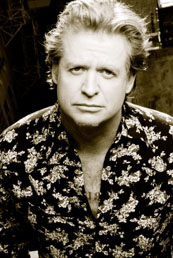 But the long tall Texan has a ready-made reason for his absence from the scene, which ended in June with the release of the optimistically titled "Beautiful Day" on Dualtone.

Unfortunately for him, the "good times" didn't exactly dominate all phases of his life. "Three kids and a divorce," says Robison during a telephone interview, explaining the delay. "That does consume a helluva lot of time."

The split was from Dixie Chicks member Emily Robison in what seems to be a remarkably friendly divorce. Consider that just a few weeks prior to the interview, the two went to a restaurant together with a couple, who they used to get together with when married.

"There were some things with the record label, your normal kind of stuff. You put all those things together," says Robison of the delay. During Robison's break in between records, Dualtone changed hands and direction as well.

Robison also indicates it was a timing issue for him personally. "I didn't really have the time to put in on writing and going away and recording and just all of those things going along with making a record. I had to get things tied up before I could get away."

Eventually, Robison, who was still performing, mainly in Texas, but not having a batch of new songs to play live, was ready. "There were still a whole bunch of things that were happening, but I didn't feel I could wait any longer."

"I tour all year round. I was tired of the same old songs that I knew," says Robison. Without new material, "I'm just going to be a zombie on stage."

And being away from the recording part of his career left Robison, 45, with some concerns. After all, the industry has changed drastically with record sales way down, labels typically doing poorly and fans moving on. "I think every artist has those fears or concerns or whatever even if they're only eight months or a year between records. Things change so fast these days."

While going through the divorce could not have been pleasant, it did at least make for several songs on "Beautiful Day," an upbeat title at a depressing time.

Robison believes "Beautiful Day" marked the first time he wrote from the first person. "I didn't really have any choice," he says, "(because) of the things I was going through. It wasn't like I could sweep those things under the rug and write a song like Good Times and New Years Day. I love those songs, but I wasn't in a place mentally where I just (had a lot) going on in my life, going on in my head."

"It was definitely a cathartic thing...Every song that I wrote on that record, I was going through exactly at that moment, and that's the first time I've ever done that."

"It was hard getting myself psyched to go. When you're in that place, you kind of want to go out and forget about what's going on. That's your brain's first inclination - get things like that out of your mind. Once you get into it, this is really cool. There's much more coming out."

"It took awhile for me to say I'm going to get completely personal."

Robison married Emily Erwin of The Dixie Chicks in 1999. They had three children together, including twins. Without any fanfare, the couple divorced on Aug. 6, 2008. In fact, the two even used the same lawyer and "did everything ourselves."

Robison indicates that a family having two musicians was not an easy task. (In fact, Robison comes from a family of musicians, well at least a few siblings. His sister, Robyn, has put out several albums, and brother Bruce has enjoyed a lot of success more for his songwriting than his own career thanks to George Strait and Tim McGraw cutting his songs, although he has released a slew of albums.)

"One of us always was (away)," says Robison of he and Emily. "What was really hard was when we were doing it at the same time. Before we had kids - and not to blame kids or anything - the first four years of the marriage or five years, it was so (much) balloons and bunny rabbits, and everything was so easy. It's something you have to work out. We just thought the both of us that things would take care of themselves."

"I think both of us wish we could have gotten through it, but we didn't, and everything happens for a reason. Things are good now."

The songs on "Beautiful Day" have an up-and-down feel that at times deal with his split, though Robison studiously avoids throwing flames at his ex. His slow, pleading read of Keith Gattis' Reconsider is followed by the upbeat Feelin Good, which Robison wrote.