Alecia Nugent is quick to point out that there's more than a little irony in the title of her third album. Around the time her second album, "A Little Girl...A Big Four Lane," hit the stores, prominent Music City journalist and critic Robert K. Oermann dubbed her a "hillbilly goddess" (which he reaffirms in his liner notes for the new disc), and the sobriquet has stuck to her since, despite the fact that her central Louisiana hometown of Hickory Grove is singularly lacking in hilltops and hollers. 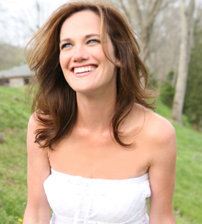 Taking advantage of the opportunity to try out her own developing talents as a tunesmith, she co-wrote the album's title track with Sonya Kelly and Carl Jackson, who continues as her producer. An up-tempo testament to the virtues of the kind of gal who prefers the Tennessee version of Paris to the French one, Nugent laughs as she agrees that the song was a blast to write.

"We toyed with the idea of writing the Hillbilly Goddess song for a while because I was afraid that since (Oermann) called me a 'hillbilly goddess,' they were expecting to write a song about me. I went to Carl and Sonya and said, 'Look, I'm all for writing this song, but I'm no 'hillbilly goddess,' even though Robert K. Oermann called me one. I want to write this song about all those hillbilly goddesses out there in the audience. The guy sitting next to his hillbilly goddess, who believes exactly that that's what she is. It was so much fun because we sat down and, once we realized that was the direction we were going we started throwing ideas out there. It was so funny, certain things that we would come up with. And it's so true for so many people. But it was just fun to write, just a lot of crazy lines came to our heads, and we put it down to paper, and there you have it."

She also teamed up with the Halls - Tom T. and Dixie - to pen Nugent Family Band, an autobiographical tune about growing up in a family band, an experience she has in common with one of her icons, Rhonda Vincent. Taking the songwriting plunge in the company of veteran pros like Kelly, Jackson and the Halls was, she says, a bit scary but ultimately richly rewarding.

"I learned that I can get really nervous and really intimidated sitting in front of people like that. I learned those kinds of songwriters, even though they have a (large number) of great songs in their catalogs, they're still just as down-to-earth and willing to help out a 'baby' writer - I'm calling myself a 'baby' writer because I'm a beginner – and made me feel so comfortable in the writing session. I learned a lot from them, (that) the person who comes up with the melody is just as important as the person who comes up with the lyrics. I still have a lot of growth (to come) there, but it's quite the experience."

Though it was in her father's bluegrass band that she got her first taste of the professional side of the music business, she recounts in Nugent Family Band that her mother was an important early mentor as well, even if she wasn't part of the band. It was a childhood filled with both the bluegrass that her father loved and the Southern Gospel she heard at home and in church.

"My mom was a big part of my musical bringing-up, because (she) played piano in church, and we always sang around the piano for special music in church on Sundays."

The same year she was born (she politely declines to name the year – "A lady never tells her age"), her father, Jimmy Nugent, founded the Southland Bluegrass Band.

"I'd get on the stage with them at a young age and sing with my brothers – Hole In The Bottom Of The Sea, actually. I had influences from both sides, but (mom) wasn't actually in the band as a piano player. So, yeah, the Southern Gospel is a big influence as well as the bluegrass."

As she grew into her teen years she began performing the traditional bluegrass her father had schooled her in, even as her contemporary Alison Krauss – now a Rounder label mate – was bringing new sounds into the music. "I had already started singing in my dad's band at the age of 15, and that was right about the time that Alison came out on Rounder – now, I'm telling my age – but I may have had a little bit of influence from Alison, and I certainly love her music, but if anybody, my dad was my biggest influence because when I (name) Stanley Brothers, and Jimmy Martin, Flatt and Scruggs, people like that (as influences), it's because I heard my daddy sing their stuff."

"I didn't even know whose songs they were. You know...it probably wasn't until I started singing in the band, and I would hear them speak of, 'well, Carter Stanley did that,' or whatever, for the longest time I thought those were my dad's songs. So, that was my biggest influence. Certainly as I was getting a little bit older I started listening to Alison and listened to Rhonda. I grew up with a dad who told me I had to sing out loud, so I was probably closer to Rhonda's music than I was to Alison's. But now, I love Alison just as much."