Dave Alvin's women are as guilty as his men

When Dave Alvin thinks back on the single tragic event that sparked his two latest albums, he recalls teetering on the edge of believing that it happened at all.

"This kind of got started as a reaction to the death of my best friend Chris Gaffney, who was a singer, songwriter, accordionist, guitarist and my spiritual advisor," says Alvin. "He'd been playing with my band, the Guilty Men, for years when he wasn't playing with his band, the Hacienda Brothers. So, the first couple of gigs that we did after Chris passed away, I was literally looking for him onstage. There were moments where I'd forgot that he'd passed away. I was like, 'Where's that harmony? Where's the accordion?'" 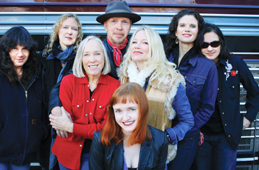 When Gaffney lost his long battle with liver cancer last April, Alvin found himself needing to express his loss in some creative fashion while simultaneously experiencing an almost incapacitating amount of grief. One of Alvin's first thoughts was that Gaffney had been largely unheralded as a songwriter in his lifetime and that he deserved a proper tribute to that aspect of his career.

"For whatever reasons, Chris just never got the breaks," says Alvin. "He was on his way with the Hacienda Brothers but he didn't live long enough to really capitalize on that. So, my role in life from now on, besides writing songs and playing guitar and playing gigs, is to try to give Gaffney some sort of a break. That was the idea."

At about the same time that Alvin began assembling the players and songs for "Man of Somebody's Dreams," he was also considering his options with his longstanding band, the Guilty Men. Clearly conflicted about wanting to get back to work, but unable to emotionally process the absence of his right hand man, the answer came to Alvin spontaneously during a conversation with promoters of San Francisco's annual Hardly Strictly Bluegrass Festival.

"I played the festival a few times; with the Guilty Men, a couple times solo acoustic and a couple times with The Knitters," says Alvin with the latter being an X country side project. "For the October 2008 festival, they said, 'You want to do something different?' and I said, 'Yeah...all girl band.' It just kind of popped out of my mouth."

In short order, Alvin put together an Impossible Missions Force group of female musicians to comprise what would come to be known as the Guilty Women. He had worked with and/or produced most of the women previously (vocalist Christy McWilson, violinist Amy Farris, bassist Sarah Brown, drummer Lisa Pankratz), some fleetingly (violinist and bluegrasser Laurie Lewis, guitarist Nina Gerber), one he knew strictly through reputation (lap steeler Cindy Cashdollar). The problem at the start was that Alvin had a long list of potential band mates.

"I know a lot of great female musicians," says Alvin. "Part of it was based on trying to get people that I knew were from different backgrounds in roots music, but not too different. It was a little bit of a juggling act. Sarah and Lisa are a stunning rhythm section. I knew that if worse came to worse, I could be up there quacking like a duck, and Sarah and Lisa would sound great."

Given the group's lack of geographic proximity and packed musical schedules, Alvin and his freshly recruited Guilty Women had almost no opportunity to rehearse before Hardly Strictly. The group met up in their backstage tent/dressing room an hour before the show and played a bit acoustically, then hit the stage for their first performance together.

"I knew that the musicians would be fine; they're all great musicians, and I knew they'd figure something out," says Alvin. "I was more worried about me. How would I mess it up?"

Cashdollar was a little nervous going into the festival, not about Alvin and about anyone in the band, but just the daunting situation they were putting themselves in. "I think the key is to not prepare," she says with a laugh. "You can't because it's such a loose situation, and I think you have to go into those with an open mind. For me, not thinking was the way to prepare. If you start plotting, it's all over before it starts."

As Alvin imagined, the band coalesced onstage within minutes, and the Guilty Women became one of the festival's highlights. Alvin's first review came from Yep Roc President Glenn Dicker, who was watching the show from just off stage. "There's a set of stairs that leads from the stage to the backstage area, and he was standing at the top of those stairs, and as I headed offstage, he just said, 'Record, record,'" says Alvin with a laugh. "Within a month and a half, two months, we were in the studio in Austin. It was almost like the blink of an eye."