A throwback juke joint crooner with a passion for rockabilly, swing, jazz, the blues and honky tonk, over the course of 14-plus years, Wayne "The Train" Hancock has recorded a string of studio albums praised by critics and music fans alike starting with "Thunderstorms and Neon Signs' in 1995. 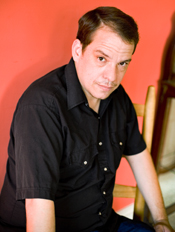 Now with the release of "Viper of Melody," Hancock's fourth album for the Chicago-based Bloodshot Records label, Hancock opted to break from his regular routine. Yes, he was once again joined in the studio by his longtime producer and musical collaborator Lloyd Maines, but he recorded the new album live with the members of his touring band at that time – Huckleberry Johnson (upright bass), Anthony Locke (steel guitar) and Izak Zaidman (electric guitar).

"It seems like the music is best when it is live, so we just play three takes of each song, sometimes four," says Hancock in a telephone interview, adding, "The album came off without a hitch - it was easy, it was easy to record."

Not only did the live recording technique make the entire studio process easier, but it also succeeded in giving the album a heightened sense of spontaneity and immediacy. This is most evident through the musical interplay between Hancock and the band. Hancock seems to relish his role as modern day bandleader throughout when he takes charge of the songs by calling out solos and compliments to his players – things you would normally expect to find in a live performance, but rarely utilized in the studio to this extent.

This loose recording style results in a collection of songs that leaves the listener with the impression that the musicians genuinely had a good time laying down the tracks. Up-tempo songs like Jump the Blues, Freight Train Blues and Dog House Blues are all excellent examples of this energetic, relaxed and playful studio setting.

Hancock explains why he chose this recording style by saying, "I think it's important that everyone in the band has a good time. If you're in the spirit, well it's going to come in to the music, and it's going to sound good."

"Well the rich folks call it recession/but the poor folks call it depression/everybody's hitting the street with the low down blues/well I ain't making no suggestions/but I'd just like to ask one question/if I can't find work how the hell am I going to pay my dues?" - Working at Working

Hancock's albums are not what you would call "topical." Although his songs cover a broad range of subjects, he's never been one to focus on current events or the politics of the day. That being said, one of the strongest songs is Working at Working, Hancock's first-person take on how the current economic hardships affect working musicians like himself.

When asked about the current state of the economy and how it affects the country, Hancock explains his personal philosophy and how he manages to keep a positive outlook, "Sure, you got bad times, but that's just a part of life. Everybody has bad times, and some people got it worse than others." He also adds, "It's not the times, it's what you learn from the experiences that you get out of them. That's what makes it worthwhile."

With the release of an acclaimed new album and an endless string of tour dates around the country, it would appear that things are going well for the 44-year-old Texas native. But as the saying goes, appearances can be deceiving.

A recent late-night fight in Kansas City between Izak Zaidman and Anthony Locke resulted in a trip to the hospital for Locke. The situation grew larger when Hancock fired Zaidman only after he successfully completed the next night's gig in St. Louis, a decision that has caused a considerable amount of controversy and criticism.

Although he doesn't have much to say about the incident itself, Hancock explains his decision to allow Zaidman to stay with the band for another show following the fight, "I know a lot of people will probably never understand this, but when you're a bandleader you can't just drop a gig because someone you like gets hurt or anything else. You got contracts, and you got people that are counting on you to be there." He adds, "We did what we had to do."

As for the people who criticize the decision he made, Hancock has some harsh words, "I had a lot of people mad at me because I didn't fire the guitar player fast enough - well that's my decision. And I would advise them that unless they've been in that position, I would advise those people to shut it."

Along with the serious injuries Locke sustained, the real shame of this unfortunate incident is that it overshadowed the release of the album by becoming the big news in Hancock's world. Luckily, he has been able to move past that by focusing on finding new players to join his band for his current tour in-support of "Viper of Melody."

The two newest members of Hancock's touring band are James Hunnitcutt, an electric guitar player from Port Orchard, Wash. and Bob Hoffnar, a pedal steel guitar player from Brooklyn. "The good thing out of it is the two new guys I've got coming to replace them, they're as good as anyone I've ever played with."

When talking with Wayne Hancock, it is clear that he is happy with his career and the music he makes. Although he acknowledges the important role albums play in his legacy when he says, "you're putting out something you're going to be listening to for the next 25 or 30 years if you're lucky," it is also obvious that life on the road is what keeps him running when he says, "If we can just keep doing that, I'll be happy. I just want to keep playing."

Hancock realizes that his musical gift is both special and fleeting and he is definitely enjoying the ride while it lasts. He explains, "Music travels - it's not related to any one person. I'm glad the spirit of music always chose me to hang with you know, but one of these days I'll be too old to do it any more. I don't know when that'll be - I hope it ain't for a lot of years."

"One of those days when that time comes man, brother music, well he'll pass that torch on to the next guy – man, that's just the way it works."