John Doe came to fame as the singer/bassist in X, the seminal L.A. punk band. In the late '70s, he, along with his then-wife Exene Cervenka, helped define American punk rock. But some were surprised when these two put out "Poor Little Critter on the Road," the debut for a side project called The Knitters in 1986. Among its couple of new songs, and an X re-do, was a beautiful version of Merle Haggard's Silver Wings, which revealed that Doe had both the skills and the true love to play country music. 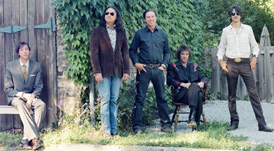 Many may have been caught off guard by this unusual turn of events, but in truth, everybody should have seen it coming. After all, Doe hinted at his sincere knowledge of roots music back in 1983, on X's "More Fun in the New World" record. In a song called I Must Not Think Bad Thoughts, he complains: "Woody Guthrie sang about b-e-e-t-s, not b-e-a-t-s."

In one sense, these words were an appalled reaction to the overly synthetic rock scene at the time. Alternative radio, and especially MTV, was seemingly embracing every new act with a weird haircut and a synthesizer. At one point he pleads: "Will the last American band to get played on the radio/Please bring the flag." This was not so much a fear of the new, as it was an observation on how great American music was being cruelly ignored. But the best way to reintroduce Americans to their own half-forgotten culture is to treat the music with love, and when Doe cries the lyrics to Silver Wings, it's obvious he feels these words affectionately and deeply.

"In the olden days, people just had AM radios," Doe recalls in a telephone interview. "And they would play James Brown, and they would play country songs, and it was kind of there to be had by everyone. So that would certainly be the first exposure I had. And then, actually, I had a girlfriend who was an older woman. I was probably 20, and she was 30. It was in Baltimore, and she was from New Mexico, and she had a bunch of Hank Williams records, and I listened to them."

John Doe and The Sadies Stop the World

But was there ever a time when Doe felt like others would consider him un-cool for liking country music?

"I suppose," he says, honestly, "but that's just a byproduct of youth rather than culture. There was a point at which – during the early days of punk – where you pretty much had to draw a line and say, 'That was then, and this is now.' But you could still use the musical education and writing techniques and use a bit of the melody."

Although Doe has touched upon country music, both in his solo work and the various bands he fronts, he had never - up to this point - released a completely country CD. But with Country Club, Doe has collaborated with Canada's The Sadies for a wonderful covers album. He once again returns to Haggard's catalogue for Are the Good Times Really Over for Good, as well as Willie Nelson's The Night Life, among many other fine songs. And as he did back in '86 with The Knitters, Doe brings a freshness and an unquestionable appreciation for this high quality material.

"I think I became aware of The Sadies through Neko Case," recalls Doe. "That was probably when that record "Blacklisted" came out. I think we've been planning this for about two years. The thing that I immediately thought of, and it was selfish, I admit – admittedly selfish – is I thought, 'This is the band I can make a country record with.' Not because country music is the only kind of music they play, but they have the right style of country music."

Doe also mixes country in with The Knitters, but the music he's made with The Sadies is much more strictly country focused and specifically trained on a particular era in music. "It's more '60s country," Doe says. "I think the '60s, in all music, like pop songwriting – whether it was Burt Bacharach or Buck Owens or all the people that worked in the Motown world – I think the '60s was especially fertile. You could say the same about, maybe, jazz in the '20s and '30s or show tunes in the '40s and '50s. So, there are different places where these genres reach these peaks."

Making a country record was on Doe's mind for a long time before now, but the timing still had to be just right. "Probably around that same time of The Knitters, people would say, 'Oh my God, you should make a country record.' And I would think about it from time to time. I've got a good voice, but not a really distinctive voice. It's not like, say, Bob Dylan, where you hear the voice and immediately go, 'Oh, that's so and so!' So my voice and a smooth Nashville band would be snooze. It would not be good. It would be too much all-the-same-shit. So, with The Sadies, they have this extra left turn. And I think they also have bluegrass abilities."

The Sadies also have a bit of psychedelic rock in them, as well. "They're not afraid to try things," Doe adds, "whereas someone in the tradition of country music may accuse you of not being traditional enough."

Cervenka is Doe's vocal partner in both X and The Knitters, but with "Country Club," he sings duets a few times with Kathleen Edwards, which brings out a different side of the singer's harmonizing abilities. "I just did it because she was hot; because she looks good in a bikini," Doe jokes. But in all seriousness, he adds, "We started singing together at a Gram Parsons tribute concert. And we just hit it off. And I asked her to sing on my last solo record ("A Year in The Wilderness").

The only X and The Knitters musician Doe brought along for this new effort was DJ Bonebrake. But instead of pounding away at the drums, as he does with X or scratching the skins with his brushes, the way he works it with The Knitters, Bonebrake plays unusually gentle vibraphone on this CD. The wider world may not know about Bonebrake's gentler side, but many locals have come to appreciate this multifaceted player.

"He's actually got kind of a following for his unique brand of kind of spacey and Latin jazz," Doe explains. "I, of course, included him because he's the other half of my rhythm section in everything. Also, because he doesn't do the kind of standard vibes pads that most people do. DJ's newest record is The DJ Bonebrake Trio, and it's called "The Other Outside."

Although Doe wasn't able to work out The Sadies/John Doe gig at Stagecoach, the country equivalent to Coachella, The Knitters, returned there a second time this year. Doe is touring with The Sadies, and Doe is also planning to record more new songs in some format or other.

"Exene and I are trying to write song songs for X, or not," says Doe. "And you know The Knitters always have five or six songs that we play live and haven't recorded yet. And I also have a handful of songs for my own thing, so, next year probably."