Even saying that 2008 was a great year for Dailey & Vincent may be an understatement. The bluegrass duo dished out a well-received debut disc, scored a big hit single in bluegrass circles with By the Mark, played a zillion concert dates and cleaned up at the International Bluegrass Music Association awards last fall.

But that was then, and "Brothers From Different Mothers," their dozen-song sophomore release, is now. 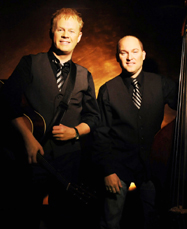 Jamie Dailey & Darrin Vincent indicate during a telephone call from the Nashville area where they both live that their initial success resulted from adhering to a more traditional form of bluegrass. "We went in with the intention of not making our music overly produced, keeping it clean, keeping it real, keeping it traditional," says Dailey, who logged time with Doyle Lawson & Quicksilver before embarking on this venture. "A lot of music is going what we call way left. We were trying to keep ours way right. I told Darrin if everybody's taking a left, we need to go right. That might be some of it."

Vincent, who played in a family band with his sister, bluegrass queen Rhonda Vincent, growing up, says he and his partner are "just stone cold bluegrass. That's our hearts, our tradition of bluegrass and gospel. No matter how hard we try, we can't get away from it because we love it so much. We really respect our elders, Mr. (Bill) Monroe, Ralph Stanley, Jim & Jesse, Osborne Brothers. All of those people that have done it before us...and try not to go outside the box too far. We try to branch out...The main thing we want is to keep that common thread of the traditional bluegrass and the brother harmony duet. We love it, and we respect it, and we want to keep it pure."

Following up a successful debut is often a tough proposition, but Dailey & Vincent felt it easier in some respects.

On the debut, Vincent, who sings and plays bass and mandolin, says several band members left after recording. "Jamie and I had to scramble to get new band members and get them up to speed onto the record. On top of having to rehearse for five shows. We had a lot of hoops to jump through the first record. This one here was less stress on us. We had our band members together to play on this."

While billed as Dailey & Vincent, there is Jeff Parker on mandolin, Adam Haynes on fiddle and Joe Dean Jr. on banjo.

But it wasn't all easy this time. "We felt a little pressure just because the first record was so strong," says Dailey. "We wanted to make sure we put another strong record, but, overall, we had a really good time making the second record. Once we got in the middle of making it, it was a lot of fun. We didn't feel the pressure as much."

"We knew we had a lot on the line with this 'Brothers' CD," Vincent says. "The main thing that I know we wanted to accomplish was to have us and our band play tighter as a unit on this record. That'd be one thing I can say we hit the mark in my opinion. We're tighter. We're more together as a group since we've been on the road for a year. Our singing is stronger...We had more of a comfort zones."

The new CD has a few carryover themes from the debut - Statler Brothers songs and influences and their take on a Gillian Welch and David Rawlings song (and why not? They did pretty well with By the Mark.)

On "Brothers," Dailey & Vincent tackle Years Ago and There Is You from the Statlers catalogue along with the closing song On the Other Side, written in part by Jimmy Fortune of the Statlers.

Dailey may have his father to thank for his Statlers jones because for his ninth birthday, his father gave him Statler Brothers cassettes. "When I was a kid, I heard just fun songs"

"I was riding in my dad's truck with him going to town one day, and this song came on country radio called Elizabeth." I looked at daddy and said, 'I've got to have that, and my birthday was coming up. So, he bought me a boom box and some Statlers Brothers tapes. I was tickled to bit."

"I just really really like their music a lot. When we started this band, I just happened to remember all of those tapes that I had. I went out and got the box set of CDs and started going through them and started hearing some of that stuff. I thought man this stuff will really cross over to bluegrass really easy because it talks about memory and home."

Dailey & Vincent sang at the Statlers' ceremony inducting them into the Country Music Hall of Fame a few years ago, and they also met a recording session for a Statlers tribute disc.