The Flatlanders deal with "Hills and Valleys"

With only a cursory glance at our economy, it's safe to say America is down in an emotional valley, rather than riding high upon a hill. Unemployment is on the rise, the housing market has tanked, and the stock market is seemingly in a schizophrenic state of confusion. America's history is comprised of both "Hills and Valleys."

"I think the hard times...I won't say it makes people more honest, but it makes 'em search a little bit deeper about some things, and then maybe honesty comes into play on some levels," says Butch Hancock, who is one-third of Texas' fabled The Flatlanders, releasing a new disc, "Hills and Valleys" in late March. 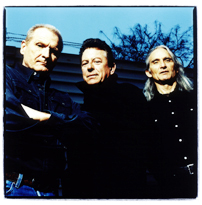 I think it's an age old malady of the human species that we lie to ourselves. We lie to each other a lot. But we lie to ourselves more than anything else. Hard times or good times, it doesn't matter which. The hard times...it gives a little bit of shock, and we stop and take a step back and maybe have a chance to reassess. And that's where some honesty might come into play. There's still a huge tendency to keep lying to ourselves. Look at Wall Street. They're still just lying through their teeth."

At the same time, Hancock finds the act of generalizing about the nation collectively, quite a daunting task. "We try to look at this, 'Oh how is America doing?'" he says. "That's an impossible thing to measure. Every person, every individual has to measure their own self. They have to look deep in their heart and measure up against everything they can come up with as a standard or as a high benchmark. Ain't nobody else can do it for you."

The Flatlanders - Hancock's on-again, off-again partnership - have always explored both the ups and downs of life. And they've always looked at life with humor and heart. Between their first release - way back in 1972 - and their follow-up (30 years later, no less) with Now Again, Gilmore, Ely and Hancock have also individually carved out exemplary careers as individualistic, solo Texas singer/songwriters.

Although they mesh together surprisingly well as a trio, each has a style that is distinctively different from the others. Gilmore is deeply philosophical, sometimes comes off more like an Eastern guru than a cowboy poet; Hancock shares some of Gilmore's philosophical leanings, but spices up these musings with sharp political barbs; Lastly, Ely is an equally skilled songwriter, but he is additionally this act's most passionate singer and performer and sometimes comes off like Austin's answer to Bruce Springsteen.

Since all these men are successful, established solo artists, it's sometimes amazing to witness how well they work together as a unit. Perhaps it's all that accumulated wisdom that keeps them so united. "There's no such thing as unprofessional teamwork, I don't think," says Hancock. "It's either teamwork, or it's not. I think we all just have a great love for each other, and there are friendships that have just lasted for so long. I think that's the first order of the day when we're together: we're friends. And it's icing on the cake that we all play music and enjoy working together. It's blessings beyond our imaginations, almost."

This unique group traces its beginnings back to meeting up in Lubbock, Texas in 1970. The act's initial '70s recordings were re-released as "More a Legend than a Band" in 1990. The CD was originally titled "Jimmie Dale and the Flatlanders," and that album's covers (Hello Stranger and Waiting for a Train were replaced by four previously unreleased tracks that were recorded during the same sessions. It took the movie business, not the record business to get these three back together semi-permanently, however. The 1998 soundtrack to "The Horse Whisperer" included South Wind of Summer by The Flatlanders, sparking newfound interest in making music together after all those years.

"I think I can safely speak for Joe and Jimmie too when I say that we have no clue," says Hancock, when asked to predict this act's future. "We never know if we're gonna ever write another song together or do another Flatlander gig. It's always great fun when the energy kind of swirls around. We sit down and focus on writing some songs, or something like that and work out another album. It's really been such great fun working both with Jimmie and Joe. And of course, all the (other) guys that took part in that ("Hills and Valleys") album. We've all been friends for years. You know, Lloyd Maines has worked with all of us, kind of from the get-go."

With all this combined talent, it's still a wonder these men don't pool their resources more often. The act's catalogue is surprisingly sparse. The group also released "Live '72," a rare concert recording, which means there are only 3 legitimate studio releases since the group's 1998 reunion.

"Hills and Valleys" is on New West Records, their first studio release since 2004's "Wheel's of Fortune. " And while it may have been a long time coming, so to speak, it's still extremely timely and relevant. The opening track, Homeland Refugee, includes lyrics that could have been ripped right out of this morning's newspaper: "I lost my home when the deal went bust/To the so-called security trust."