Put the words and the rootsy, restless music aside for a moment. "Midnight at the Movies," the second Bloodshot Records release from 27-year-old Justin Townes Earle, has another striking element: the generous, double-panel photo spread inside the CD package that seemingly features everybody involved with the album's creation. The photos fall somewhere between candid shots and formal sittings. Think senior pictures if, that is, you went to an especially cool high school and the photo backdrop was funky antique-yellow wallpaper. 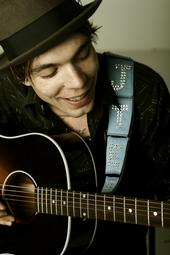 "I kind of have a bit of an obsession with portraits," says Earle, on the phone from Nashville. "I like to go to thrift stores and find other people's family portraits. I find something very fascinating about them; I have them all over my house."

But this collection of close-ups is clearly more than a nod to a hobby. It's an acknowledgment of everybody's contributions to "Midnight at the Movies," and it's a creative way of making the point that, in Earle's words, "It ain't just about me. I'm not some kind of super songwriting being who can do all this on his own."

Earle explains: "I write the songs. The chord progressions, the melodies are mine. But there's a hell of a lot more to a record than that." He cites Skylar Wilson, who plays most of the keys on the album, as one example. Among Wilson's many singer-songwriter-friendly qualities is the knack for applying a little extra coloring, be it the Farfisa on the title track or some well-placed vibraphone. "He's like that kind of guy who can think 'Okay, this just needs one note.' And he has this really great Stax and Motown sensibility to music," says Earle. "He's very valuable in the studio."

Of course, he could just as easily be talking up multi-instrumentalist (banjo and mandolin a specialty) Cory Younts, Earle's longtime musical companion, or Brian Owings, go-to drummer for the cream of Nashville's soul and blues crop, or pedal steel player Pete Finney.

"Everybody who worked on the record definitely earned their place and earned their picture and earned a lot more than what I could pay them," Earle continues. "It's really rare: I've had the luxury and the privilege of having pretty much a set group of people for my records. And even though I've only made two full-band records, that's still pretty astonishing - especially in this town, because this is one of the most mercenary towns on earth."

The recording process for those two full-band records - last year's "The Good Life" preceded "Midnight at the Movies" on Bloodshot - didn't vary much. In both instances, Earle's eye was on keeping things lean and economical, and both records were joint production efforts between Steve Poulton and the well-traveled R.S. Field (Sonny Landreth, Webb Wilder, Scott Miller and Billy Joe Shaver for starters). Earle and his band mates would record a basic track, and then they'd tear down and do any overdubs that they could right there instead of moving on to another basic track.

"The Good Life" took seven days total: four days of recording, two of mixing, and one of mastering. With "Midnight at the Movies," they got a little greedy, spending seven whole days recording in the studio. To get the most out of that week, they logged long sessions and rotated two engineers, with Richard McLaurin taking the noon to 7 p.m. slot and Adam Bednarik holding down the night shift from 7 p.m. to 2 a.m.

Whatever the recipe, it's working. Like its predecessor, "Midnight at the Movies" mixes styles and hops across eras. You get swinging old time numbers sharing space with Jackson Browne-ish folk rock. Honky-tonk rubs elbows with a lively fiddle and banjo take on '80s guitar-rock. Guitar rag, say howdy to a trad-sounding story song. Despite this variety, or maybe because of it, the center holds. And in that centerpiece spot, going back to Earle's photograph obsession, is a musical family portrait of sorts in the form of a song titled Mama's Eyes.

I am my father's son/I've never known when to shut up/I ain't fooling no one/I am my father's son, Earle sings as the song gently rolls to a start, his voice rich with memories and a message. We don't see eye to eye/and I'll be the first to admit I've never tried. As Mama's Eyes nears its conclusion just two minutes later - one of Earle's strengths as a songwriter is getting in, saying what he has to say, and getting out - there's more eye talk, but there's also a shift in focus. Strike a match and I see my reflection in the mirror in the hall/and I say to myself/I've got my mama's eyes/her long thin frame and her smile/and I still see wrong from right/cuz I've got my mama's eyes.

Okay, so maybe the song is more like a series of three portraits. In the first, Earle's father, country/rock hero Steve, and his mother Carol are holding a little rock 'n' roller (see "Guitar Town" 1986) between them. In the second, it's father and son, not exactly embracing, but there's not a lot of space between them either. Both are leaning on guitars. And in the third, it's mother and son, both beaming, their eyes matching ice-blue pools.