Once standing on stage at the Grand Ole Opry as a rising star as the lead singer for Ralph Stanley and the Clinch Mountain Boys, bluegrass guitarist Ernie Thacker now struggles from his wheelchair on a daily basis. 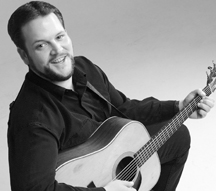 A car accident near his home in 2006 left him paralyzed from the waist down. His survival was called a medical miracle, after suffering 12 broken ribs, a broken collar bone, ruptured spleen and a crushed aorta. Since the accident, he has battled several infection setbacks and continues to rehab each day. His largest obstacle to overcome musically has been the loss of half a lung. However, he was not deterred from completing his debut record for Pinecastle Records, "Hangman," set for release in February. "I have had to learn how to sing all over," says Thacker from his Clinchco, Va. home. "What I used to do in one breath now takes two or three. It has been very hard, but I think it is getting better. It just takes time."

Thacker put the finishing touches on "Hangman" after returning home from the hospital. "We had everything done except for the mix prior to the accident. It took a couple of weeks to complete. I recorded this on my own and pitched it to different labels. I was very pleased Pinecastle picked it up. I have always looked at them as very respectful to bluegrass music, and that was exactly what I was wanting."

"We signed Ernie because he is a talented singer / songwriter / band leader," the founder of Pinecastle Records Thomas Riggs says via email. "I had held some discussions with his former label, which had gone inactive, about purchasing some of Ernie's masters."

"During those discussions, I learned that Ernie had completed an unreleased album shortly before his tragic accident. Ernie and I reached an agreement in December of 2007. Since then, we have been waiting for Ernie's health to improve so that he could tour in support of the new album."

Growing up in the bluegrass cradle state of Virginia, Thacker was surrounded by a musical family that fostered a strong desire in him. His uncle hosted many jam sessions at his home, some of which included none other than neighbor Ralph Stanley. Thacker picked up the fiddle at age nine and joined in as much as possible.

"The first song I ever learned was 'You Are My Sunshine,'" says Thacker. "My dad played harmonica, and he liked that song. I played it along with him over and over. Like 50 times. It tickled him to death that I could play it with him."

Thacker began picking up other instruments as well. One of the first was a mandolin. Stanley was familiar with Thacker from the jam session and invited him up on stage at the Appreciation Day Festival hosted in Stanley's hometown of McClure, Va. to play mandolin and sing a song. After performing a couple of times locally with Stanley at different events, he asked Thacker if he would be interested in going out on the road with him.

"It blew my mind. Here I was still wet behind the ear at age 16, and I was standing on stage with Ralph Stanley. It was a dream come true. He was like a superman to me."

After touring with Stanley for more than a year, Stanley's lead singer Sammy Atkins decided to leave the band. In need of a new lead singer and guitar player, Stanley turned to now 18-year-old Thacker. "At first I was very apprehensive. I had never played guitar much outside of my home, but I knew this was a great opportunity so I told Ralph I would do the best I could."

There were many highlights that still standout in Thacker's mind about those days with Stanley. Among the best were his moments on the stage of The Grand Ole Opry. "My first trip there, I got to sing three-piece harmony on the same mic with Ralph and Patty Loveless," he recalls. "One of my proudest moments was when Roy Acuff asked if we would play his favorite Stanley Brother's song Rank Strangers. Roy stood about a foot away from me, smiling, as I sang the song. My knees were literally shaking."

In 1994, Thacker decided it was time to try something a bit different. Along with Junior Blankenship, a former lead guitar player for Stanley, Thacker attempted to do his own thing. "Junior and I wanted to try something different in our own style. I really liked what we were able to come up with, we had a good sound, but we just could not catch enough breaks to keep our heads above water."

"Looking back on it now, I wish I would have stuck with Ralph a bit longer and learned more, but we were young and ready for a change. To be honest, I could never play the mandolin to satisfy myself when I was with Junior."

After touring with Junior for two and a half years, Thacker decided he needed a change in scenery. Giving up on music, he moved the family to Ohio and began working in a factory. He was there for close to year when he received a call from Tim Austin. Austin was preparing a Stanley Tradition record, and asked if Thacker would mind coming to Roanoke, Va. to sing a couple of songs for the record.