The Gourds deliver a haymaker

The Gourds have smartly covered everything from David Bowie's spacey glam sounds to Snoop Dogg's hip-hop (most notably "Gin and Juice") since they started in Austin in 1994, Not surprisingly, these adventurous behaviors have earned this unique act the label of Dixie flavored novelty act in some quarters. But Weird Al with a Southern accent they certainly are not. 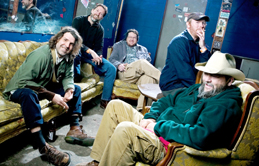 Granted, adding twang to both rock and rap may have garnered them plenty of chuckles. But The Gourds certainly aren't playing merely for the laughs - especially when it comes to making seriously good country music. For over a decade now this act has amassed a respectable catalogue of memorable roots-rock music, including an extended six-album stint on the esteemed Sugar Hill label.

The Gourds now record for Yep Roc, with the brand new "Haymaker!" their second release for that imprint out in January 2009. Two tracks ("Country Love," "Country Girl") even include the word "country" right in their very titles as bold exclamation points. Yet, there are also plenty of unique sonic variations on country sounds incorporated throughout this release. "The Way You Can Get" is a little like acoustic rockabilly, whereas "Fossil Contender" is what Guided By Voices might have sounded like - had they been raised in Austin, instead of Ohio.

Music journalists like to throw around the term "Gourds Music." And while diehard Gourds fans may know exactly what this word couplet signifies, regular Joes likely have no idea what this uncommon group's style is all about. "Tom Waits had a good term for his music - but it applies sometimes to our music - which is 'surrural,'" chief Gourd Kevin Russell explains.

Calling this 'surrural' is perfectly appropriate because The Gourds have always matched too-smart-for-mere-farmers lyrics with music that will please most any farmer in the dell. For instance, one song off the new album, "Luddite," is named after a political group of anti-technology folks (nuts?) who reacted angrily to the many technological advances that created the Industrial Revolution. Even so, newer The Gourds music is far less over-the-head stuff. "I think more and more we're writing a little more linear, in a little more of a narrative style compared to what we used to do," Russell admits.

The term "Gourds Music," in fact, may actually say more about the people who listen to the band's recordings, rather than the music itself.

"For me, the way I think about it is it's kind of a new urban country music hybrid thing," Russell says. "Lots of people - I like to call these people well-read-necks - are some enlightened rogues out there; girls and boys who are pretty intelligent people, successful people that lean to the left, mostly, politically. But they do appreciate the sounds of Southern music, where a lot of them are from. We're kind of a small digit on the left hand of the New South. There are people out there that like country music, but don't like Nashville."

Although you may never see these Gourds guys at Lollapalooza anytime soon, they are nevertheless a kind of an alternative band. "Bands like us provide yet another fragmented alternative in the fragmented landscape of alternative music," Russell says.

Even so, both lyrically and musically, much of the music on "Haymaker!" ought to appeal to lovers of traditional country music. This is especially true with the lovely "Valentine," which rolls gently over sparse percussion, mandolin and accordion, just like a tear-in-the-beer, jukebox tearjerker.

"That particular song is a Max Johnston song, and that's Max Johnston singing it," says Russell. "He is really kind of an old, softy, sentimental guy. He loves Lefty Frizzell, and to me, that song has a lot to do with Lefty Frizzell in my mind. When I hear it, I hear Lefty Frizzell. Often Max will bring those types of songs in, and I think it's always a cool thing to do 'em. It does bring a certain feeling to our record to have a song like that on there."

However, a song like "Luddite" sure makes The Gourds appear egghead-edly intellectual. But after looking more deeply into the story behind this particular song, The Gourds appear closer to sci-fi movie fans, instead.

"Honestly, originally the song was going to be about a Jedi Knight," Russell elaborates. "Jimmy (Smith) kind of freaked out, he said, "I don't want to get sued by George Lucas." So he changed it "Luddite." He sort of came up with the idea at sound check. But he was singing it, "I am just a Jedi." We started playing it at sound checks. But then he changed it to "Luddite," and then he wrote the verses for it after that. It's funny because I always used to kid Jimmy that he was the Luddite of the band. He didn't have computer. He didn't have a cell phone. To send Jimmy a message, you hand to write it on a tablet and send it to his cave. He was kind of surprised to hear, after he wrote the song, when I told him he was considered the Luddite of the band at one time. But he's come a long way since then."