After 81 years, Charlie Louvin shows no signs of slowing the pace

It is not overstating the case to cite Charlie Louvin as a living legend. As a one-time partner in the Louvin Brothers with his late brother Ira, an inductee into the Country Music Hall of Fame, the Songwriters Hall of Fame and the Grand Ole Opry, and a performer who has been entertaining country, gospel and rock audiences for well over five decades, Louvin has nothing left to prove to anybody. And yet, the 81-year-old icon continues to tour about a third of the year, a seemingly grueling road schedule for a man who clocks in about a decade and a half past normal retirement age. 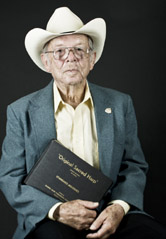 Louvin's recent upswing in live appearances has been fueled by his almost manic release schedule over the past two years since signing with Tompkins Square. His Grammy nominated (and star studded) eponymous debut for the label was followed in the fall by a live album, "Live at Shake It," recorded at a Cincinnati record store just weeks after the release of "Charlie Louvin," his first album of newly recorded material in more than a decade.

Louvin is similarly double booked on the release sheets in 2008. Tompkins Square released "Steps to Heaven," Louvin's first all-gospel album in 15 years, in September, and the label is also readying "Charlie Louvin Sings Murder Ballads and Disaster Songs" for a December release. There had been talk of releasing the pair as a dichotomous double album, but scheduling prevented it.

It's certainly no stretch for Louvin to release a gospel album; he and Ira began their joint career as the Louvin Brothers in the '40s singing songs they learned in church as children a decade before their professional debut on the radio. "Steps to Heaven" is a natural addition to Louvin's long and illustrious solo catalog. At the same time, it's been close to 15 years since Louvin recorded an album of inspirational music.

"I did one on an indie label out of Miami, Fla., and the only people that ever knew I did it was the musicians that was on it and me and the guy who owned the label," says Louvin. "He didn't send any out or do anything. I wasn't disappointed in the product, but I was disappointed that people didn't know it. Small records labels just don't have the wherewithal to mail out 3-4,000 CDs and then get someone to help promote it, and I didn't have a publicist then. The title of the album was 'Heaven Knows It Must.' This old boy still puts them out there. He don't pay believe in paying royalties anyway. So, he don't even want your address."

A lot of credit for Louvin's latest resurgence has to go to Rosenthal, who looked up the country/gospel icon after seeing his show in Albany, N.Y. and offered him a contract after noting that Louvin had been unrecorded since 1996. Rosenthal worked up the set list for Louvin's Tompkins Square debut, secured the services of producer Mark Nevers and his star-crossed Rolodex, arranged for the recording of the in-store appearance at Cincinnati's Shake It Records and has largely determined the directions of the next two albums as well.

"For the third one, he suggested we do a gospel," says Louvin. "Mark Nevers knew three black ladies that was sisters and great back-up singers (Alfreda McCrary Lee, Regina and Ann McCrary) and were on some of the biggest records that ever happened. And then we could get Deadrick Lee on piano, and if you've listened to the album, you know he fills the musical part up so well you don't need nothin' else. I was pleased with the end results."

Louvin is the first to admit that he has been more than just a little hesitant to jump back into gospel, given the impossibly high bar set by he and Ira back in the '50s. "All the records that my brother and I ever cut are still available," says Louvin. "I can't say that I could even do it that good because there was only one Ira Louvin, and he's not recording down here now, anyway. It's impossible for me to better what the Louvin Brothers done, so I've left them alone for that reason. I don't like me by myself singing gospel, but if you get a good vocal group behind you sometimes, it's alright."

Still in all, the allure of returning to a straight gospel format proved to be irresistible for Louvin. "The chance to do this was good for me because the first four years of the Louvin Brothers being on Capitol Records, we did nothing but gospel songs," says Louvin. "They already had a secular duet by the name of Jim and Jesse, and they got their contract by singing a Louvin Brothers song, 'Are You Missing Me.' When we could, we expanded into secular music. We didn't forsake the gospel, we still recorded a secular album and a gospel album in that manner as long as we was on the label, until we broke up Aug. 18, 1963."