The end of junior year in high school for many is a whirlwind of final exams, making summer plans (maybe even including a job) and complaining about a recently-taken senior yearbook picture. For a rising young bluegrass performer like Sierra Hull, it's all that and a lot more. 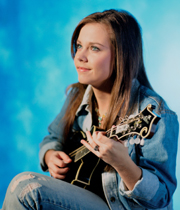 Just within the last two months, she's fronted her own band, played the venerable Merle Watson festival in North Carolina, shot a bit part in and played on the soundtrack of an upcoming movie and, let's see, what else? - Oh yeah, she's also enjoying the early May release on Rounder of "Secrets," her recorded debut as a full-fledged instrumental and vocal talent.

Enjoying a rare evening off two days after the end of the school year, Hull is relaxing at home in her native Byrdstown, Tenn., close along the Kentucky line some 90 miles or so to the east-northeast of Nashville (where she's become a familiar part of the Music City bluegrass scene - just check out the all-star cast backing her on "Secrets").

There's a steep price to pay, she acknowledges, for starting a professional music career so young. "It's really almost ridiculous sometimes. It's really rough. I have to really try to work extra hard a lot of times to stay up with my grades and to work on homework, and I'm usually going in early or staying late after with some of my teachers who will help me get caught up, and that sort of thing. I miss a lot of school, so when I come back I'm usually trying to do twice the work. So, sometimes it can get a little bit stressful and scary and all that, but it's just one of those things you've gotta do at this point. I want to play music, so I think it's all worth it, but it's just hard sometimes."

Young as she is, Hull is not exactly a newcomer. A mandolin prodigy, her recording debut came about in 2002 with the self-released, all-instrumental "Angel Mountain." When you're still only 16, she laughs, 6 years seems like a long, long time ago.

"I don't even remember a whole lot from when I made that album. I remember doing it, of course, but there are just certain things about it that I feel were foggy, you know, to look back on now. I don't really know, for sure, what drove me to pick the songs or whatever. I just remember my dad really helped me a lot as we tried to figure out what tunes to do. Then, to go from doing that to making the record I did now, I felt there were so many things I had changed. Not that I didn't know anything about music back then, but I knew so little, in a lot of ways I knew so little. I just knew I loved to play, and that was important to me."

"And now, throughout these years I've been able to go to a lot of festivals and listen to a lot of music, and I've learned just so much more since then and spent a lot of time studying certain things. I finally just felt ready to do it. I tried to work more on my singing and feel more comfortable with that."

"So, to have the chance to make this record was a big, big difference because I felt like I was coming into it with much stronger ideas and more of a desire to really want to make a really good album, whereas before I probably didn't even understand what it took to make a good album. I just went in there and went 'Wooo, I'm gonna play some music!' It was kind of similar with this, too. It was still fun in that effect, but I really had the chance to sit down and go, 'okay, what is it gonna take to make an album that I'll feel will express me and the things I like and have the type of sound that I want?'"

"I feel like just listening to a lot of different things, I slowly every year was getting a little bit better and getting closer to the point where I felt ready to make 'Secrets'."

Hull quickly names contemporary masters Chris Thile and Adam Steffey (a member of Alison Krauss' band for many years) as primary mandolin influences, but says that what Bill Monroe called the "ancient tones" are starting to resonate with her more and more.

"You can get inspiration everywhere, everything you listen to, really - I feel like everything I've ever had the chance to listen to or hear, all that just stirs up things inside you and influences you musically, everything you're exposed to...Chris and Adam would be the two that have really affected me the most, I would say, but...especially now that I'm older and listening to more Bill Monroe,:

"I was talking to somebody the other day and (was saying) I feel like I'm starting to play some things more traditionally because I've been listening to some of that stuff more. The older I get, the more I tend to really go back and appreciate Bill Monroe and Jesse McReynolds and be blown away by what they did and especially when I start thinking about that time period."

"Wow, for them to not have anybody much to pull any kind of influence from - I've got everybody and their brother to listen to and pull influence from, but those guys, they had nobody, so to go back and listen to that, it can be mind-blowing."