Hayes Carll has "Trouble In Mind"

Hayes Carll is a Texas singer/songwriter, which is a categorical description that holds a lot of artistic weight. After all, this subset also includes Lyle Lovett, Steve Earle and Townes Van Zandt. And heck, let's not forget Willie Nelson and Waylon Jennings. 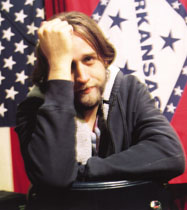 But what exactly makes Texas singer/songwriters so special? Well, it is about more than just being born in that big state. Rather, it likely has something to do with a territorial individualistic streak, where when it comes to Texas songsmiths -- as with fingerprints and snowflakes -- no two are ever alike.

The hard part is trying to choose which particular Texas favorite Carll is most like. On his Lost Highway debut, "Trouble In Mind," Carll's third release, many differing, yet equally valid comparisons, can be drawn. With "She Left Me For Jesus," about a man who must come to grips with his woman's Jesus-loving Christianity, a Lovett-ian sense of humor clearly comes through. This guy is jealous of Jesus, not because he sees him as the savior of mankind, but because this unfamiliar Jesus guy presents romantic competition. Like Lovett, the song shows how Carll can look at familiar subject matter in a unique way. But then again, with "I Got a Gig" Earle's road warrior mentality stands out most of all. Thus, Carll is a composite of many fantastic performers.

Only a fool would try and choose the best-named country song of all time. Nevertheless, "Bad Liver and a Broken Heart" certainly deserves plenty of first place votes. That title about says it all. A broken heart leads to a bad liver, in the same way the law of gravity postulates that what goes up must come down. Call this the law of romantic gravity, if you will.

"That's by a buddy of mine named Scott Nolan, who lives up in Winnipeg, Manitoba" Carll explains in a phone call from Texas. "He got the title, I believe, from a Tom Waits lyric – we're all stealing from each other. He comes down to Texas a fair bit, and I go up to Canada a fair bit. I generally don't do a lot of cover songs – I think that's my third one in three records – but there's just something about it that really spoke to me. Partly it was the Arkansas reference, and then partly it's about being a musician on the road."

One of the song's best lines has little to do with liver disease or broken heartedness. Instead, it's borderline philosophical. "Doesn't anybody care about truth anymore?/Maybe that's what songs are for." This ability to tell the truth in ways that non-musicians and non-songwriters can rarely do, grants Carll a special privilege to tell it like it is with song.

"That's a lot of what attracted me to this profession," Carll admits. "Even before it was a profession for me, it's just what attracted me to writing - with literature and poetry to start off with - and then more so with music. Whether it's a political issue or a social one or just trying to say how you feel about your lover or about family in two minutes. Or sometimes even with just a lyric, where one line can speak more than a two-hour speech. It cuts to the point more quickly. And when you put music behind it or a voice singing, to me that always had more resonance and effect. On my walls at home, I have quotes from people, but I also have song lyrics that people put up. What I aspire to is a Kristofferson lyric or a Dylan lyric or a Townes lyric, and they say things where there's so much truth in one line. You can spend 10 years trying to write a book and not have as much clarity and beauty as you can get sometimes in one line of a song."

Carll, ever the modest one, doesn't place himself up there on a pedestal with some of the songwriting heroes he just rattled off, however.

"I'm happy with my progress, but I learned early on that I'll always aspire to get where those guys were and try and compare myself in a way that keeps me going forward," he says. "I realize I'm not in that league and, in reality, no matter how good and how much of my potential I fulfill, I'll probably never be there. There are some guys that are truly geniuses at this. I think I write a good song, and I hope people out there relate to it and like it."

"But I don't fool myself into thinking I'm at that level. You just keep going. I realized when I was 21 that I was not on the Bob Dylan career path. By that point, he'd already put out 'Freewheelin' Bob Dylan' and had written 'Blowin' in the Wind' and 'A Hard Rain's Gonna Fall.' He'd already shown the potential that he had, and I was singing in Bob's Sports Bar and World Famous Grill, playing Merle Haggard covers. But that doesn't mean I have to give up just because I'm not as good as the greatest songwriter of all time. It makes me never settle. And I try and compare myself to my heroes, to see if I think they would like the song. Does it feel unique and have its own qualities? Does it have my voice? But I try not to get too down when I realize I'm not Kris Kristofferson."