At the time of their 1997 self-titled debut on Rounder, Longview quickly came to be regarded by many as the first bluegrass "supergroup," a coalition of six of the leading lights of the contemporary bluegrass scene. The project was successful enough to spawn two follow-ups, "High Lonesome" (1999, also on Rounder) and "Lessons In Stone" (2002, on Rebel). 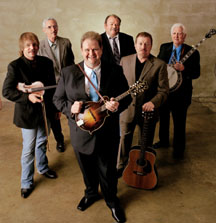 Now back with Rounder after a six-year hiatus, they return with "Deep In The Mountains," yet another throwback to the "stacked" three-part harmony drawn straight from the era before the term "bluegrass" came into widespread use to describe the genre.

Don Rigsby, just past his 40th birthday, has been one of the driving forces behind the Longview phenomenon from the start. A longtime mandolin and vocal standout, he was one of the six who collaborated on the first three albums along with Joe Mullins (banjo), James King (guitar, vocals), Glen Duncan (fiddle), Dudley Connell (guitar, vocals) and Marshall Wilborn (bass).

Changes were afoot though with Connell, Duncan and Mullins leaving over time commitments and family health issues. Connell worked a lot with Seldom Scene, had just gotten married and was getting Seneca Rocks together with his wife, Sally Love. Mullins owned and operated a radio station in Ohio for the last 10-15 years, and Longview was pretty much the only performing/recording he was doing other than on his own station. Duncan apparently left over family issues.

Remaining with Rigsby in the current lineup are Wilborn and King, but the new faces include J. D. Crowe on banjo, Lou Reid on guitar and Ron Stewart on fiddle. Still, Rigsby says, the band's sound remains faithful to their original vision.

"Keeping in mind the same principles as Longview's always maintained, we're gonna do hardcore, traditional bluegrass with a hard-driving style based in the 1950s and 1960s, and late 40s, and we're gonna try to dig out obscure material – I mean, we're not gonna exclude the Monroe-Stanley-Flatt and Scruggs catalog, or Reno and Smiley, necessarily, but we're gonna dig really deep into regional acts. That was always one of the hallmarks of Longview, we weren't afraid to do stuff by regional performers who were admirers of (the pioneers). And I think that's one of the major strengths of the band. When we lost Dudley, and when we lost Joe in particular, and even Glen, they were really strong in finding that material. But I'm a pretty big proponent of that too, and so (are the rest), and James is a real big aficionado of old regional singers and stuff too, so we're not hurting for it."

Rigsby recalls that the genesis of the band's signature vocal sound hearkens back to a 25th anniversary celebration for Rounder that took place in the early 90s at the Denton festival in North Carolina.

"They were doing special shows and special configurations of different people. I was with J. D. Crowe at the time, we're talking (around) 1994. James was there, and Rounder was promoting him pretty heavily because he was a new act for them. Of course, they had the Johnson Mountain Boys at the time, and Dudley was there with them. And I was with a Rounder artist (Crowe)."

When Rigsby, King and Connell got together for some impromptu singing, it quickly became apparent that something special was going on. "We were all there and big fans of the Stanley Brothers. The kind of harmony we were singing was high trios, the kind of stuff the Stanleys did back in the 1940s with Pee Wee Lambert and Carter and Ralph. And I have to say, and I might be a little bit prejudiced, but those three voices were kind of magical, and I still have a lot of fond memories of that."

Four albums later, he says, the magic is still there, even if one of the voices has changed. "We've got the same kind of thing going on on this record, too. Lou Reid has stepped into the slot that Dudley once filled – Lou is an incredible singer in his own right, you know – and we've recorded some of that same kind of material on this record, too. That sound is kind of what sets Longview apart from most bands...I thought at that time, 'Wow, how wonderful would it be to record this stuff?'"

Melding three new distinctive talents into the mix might have been problematic, but Rigsby says it actually opened up new dimensions for the band, especially with regard to vocal arrangements..

"Lou might try to sing the tenor, and then I might try to sing the high baritone. The songs will try to tell you what they need, if you'll just pay attention. Lou's got a certain timbre to his voice, and so do I, and we've got more options on baritone. I mean, we've got Crowe, who's one of the all-time great baritones in history – he learned his craft from the great Jimmy Martin – and he's gonna know how to sing a stock baritone. And Ron Stewart's a fabulous baritone singer, too, and so is Marshall. And now, we've got the ability in Ron Stewart that we actually didn't have before – I mean, we could pull it off if we needed to, but it wasn't really convincing – but (Ron) can sing bass. So now the possibilities are endless, because we can easily do some old quartets. So we're probably going to lay that up for the next installment, maybe get a good quartet number or two."