When we last heard from Carlene Carter, President Bill Clinton was in his first term. King LeBron James was barely in double digits, age-wise that is.

And Shania Twain dominated the country album chart that year with "The Woman In Me." 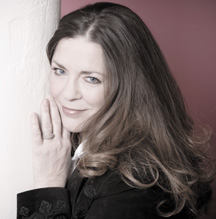 Yup, it's been a long, long time since one of the heirs of the Carter Family heritage has been heard from musically - "Little Acts of Treason" was released in August 1995 to be exact.

Carter, the daughter of June Carter Cash and singer Carl Smith and stepdaughter of Johnny Cash, has been through quite a lot since "Little Acts..." hit stores.

Some of it involved acting, but a lot of it was not the kind of stuff you'd want to be known for - drugs (her second stint with substance abuse), the police blotter and a series of unfortunate, sometimes, tragic deaths in the family.

But now Carter, 52, is back in a big way on a small, but respected indie label, Yep Roc, with the release of the appropriately titled and highly personal "Stronger."

When asked the obvious "where have you been" question, Carter says in an interview from the California home of her producer and Doobie Brothers member John McFee, laughing, "I guess I was doing research for the last 13 years."

"That's a big question. How long do we got here? Part of had to do with the fact that I had written a bunch of new songs. I kind of got the bug again to be writing. I had done this play about my mom, my aunts and my grandma, and I got back to singing and performing again doing that, which got me inspired to want to go back into the studio. Then I hooked up with my friend John McFee. He took my songs, and we just made a record. Everything just clicked from the time we decided to do it until it's done."

But Carter, a friendly, upbeat sort on the phone, always doesn't shy away from talking about the darker side of her life.

She wondered whether she would return to music after her travails. "Yea, of course, I did," she says.

"I had gotten really burnt out on the road there, which caused me personal problems which is pretty well documented in the press."

"I experienced a lot of loss. I really didn't really know what I was supposed to be doing any more. All I was trying to do was put my life back together and have a life. I wasn't supposed to leave this world no matter how hard I seemed to try. I fell in love with that wonderful man, and I got married...I have my kids and grandkids and friends. I've got a wonderful husband. My life is completely different now. It really opened the door for me to be quiet enough to sit still enough to write these days."

Carter got her career going in the late 1970's doing rock and then switching over to country with sometimes a pop edge to it, while still maintaining her big, lively voice. It wasn't until 1990 that she had a few country hits with "I Fell in Love" and "Come on Back" and a few years later with "Every Little Thing."

Carter spent a lot of time on the concert trail and enjoyed a solid career in Europe, always able to play there even while not racking up the hits here.

"When I quit going on the road in '99 I think, I was really burned out. I had been home 27 days the year before. I lived in three houses...I had gone on the road and from house to house dusting my houses."

"I wasn't a clean freak or anything. I'd spend my two days off there dusting. It just wasn't really a home life at all. With all the personal issues with drugs and Howie's drug problems and trying to be in a relationship with that and trying also to get my shit together, it became too much. I just quit."

"Howie" was Howie Epstein, formerly a member of Tom Petty & The Heartbreakers and Carter's longstanding boyfriend. He produced her hit 1990 disc "I Fell in Love" and her follow-up three years later, "Little Love Letters."

They were together for 16 years, although he does not count as one of her four husbands (British pop singer Nick Lowe does - they were married from 1979-90).

Carter indicates her heart just wasn't in performing and music during this period.

"I always want to be genuine to my audience, genuine on stage. It made me feel so bad like I was cheating my fans and cheating people who paid to see me. I had these little kids, who loved the Barbie doll aspect to me, and I would look at them and feel so guilty about myself, I had to quit...I need to pull back. I needed to quit. I needed to get my life together. I didn't want to take it for granted."

"When I'm on stage, I always appreciate the fact that I am able to make a living doing what I love doing. I was hurrying through songs. I'd be in the second verse of a song, I would be like, 'when's this going to be this over?' I felt really bad about myself. It fueled my self-destruction too."

"I was on automatic, and I don't want to be on automatic. I want to be present and want to experience the whole thing. Every time you play live music, it's a different experience. Their (the audience's) reaction is different than the audience the night before. It's an energy thing. It's a spiritual thing. It really is. I have a responsibility to show up and do my thing. I really believe that whatever I have to offer doesn't come from me. It comes from somewhere else. I'm just the vessel."