When Kathleen Edwards performed around Ontario, Canada in 2001 and 2002, her club shows were sparsely attended. Then "Failer" came out, and all of that changed, the labels were calling for her, Letterman was praising her work, and the support slots grew to the likes of Bob Dylan and Willie Nelson a few years later.

But after 2005's "Back To Me" and the subsequent touring, the singer-songwriter was worn out. Taking time off from the road, Edwards even had a stint working at a winery. Not that she needed the work to make ends meet, but getting away for a bit recharged her batteries. 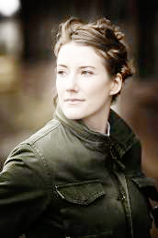 Now, on the cusp of releasing her third album, "Asking For Flowers," Edwards is ready to take the bull by the horns again with what could be her best album to date. The singer started working on the album last spring.

"With 'Buffalo,' the reason it's first on the record is because it was the first song that I wrote for the record," she says. "It's about the little devil on one shoulder saying you're never going to write another song, and it's not going to be any good. It's sort of struggling to break the ice."

Once that creative ice was cracked, Edwards says a few of the songs seemed to write themselves including the closing song "Goodnight, California" and "Sure As Shit," which took her about an hour to write. Meanwhile the tender title track, bringing to mind something Ryan Adams or Blue Rodeo singer Jim Cuddy might cut at some point, was sparked by a conversation Edwards had with a close friend who uttered the phrase.

"I'm really proud of 'Asking For Flowers' because I'm just really happy about the sentiment that I wanted to write about and feeling that I did it justice and that my friend would be proud to know that I wrote that song for her. That's a good feeling."

Perhaps the toughest song to write was "Oil Man's War," which she fought with for a while.

"I knew I liked it, but I wasn't getting the right words or the right melodies, and it just wasn't working," she says. "I didn't want to write some stupid cliché song that was just a follow-up to 'In State' (off 2005's "Back To Me"). I wanted to write a song that wasn't just a phoning-in, edgy, anti-oil war song."

Probably the cornerstone of the record though, and the song that will have many talking, is the haunting "Alicia Ross." The song, taken from the subject's viewpoint, is one of the best Edwards has done three albums in, and its sparse, minimal approach would measure up to anything from Springsteen's "Nebraska" landmark.

Unfortunately, like some of the material found on "Nebraska," the song deals with a tragic story, which took place in Toronto in the summer of 2005. Alicia Ross, 25, went missing in mid-August of that year. A frantic five-week search, which made national headlines, concluded with a neighbor confessing to murdering her.

By November 2005, Edwards had the song but had only performed it a few times live, including a stirring, lump-in-your-throat rendition at a Toronto show that had the singer keeping steady vocally as tears streamed down her face.

"I don't know if I've played it since that show," Edwards says. "It was a pretty new song, and I haven't really played it. I think I might be dreading it a little bit because it's a pretty intense song to play, and there's a lot of fear about playing stuff that's just heavy, very heavy. I'll be playing it for sure, but I'm going to wait for sure until the full band starts working together again."

An acquaintance of Ross attended the Toronto show and contacted the Ross family about the song.

"Alicia's mother contacted me and asked me to hear the song," Edwards says. "So when I finished recording it, I sent it to her, and then I asked her if it was alright with her if I named the song 'Alicia Ross' and put it on my record.

On a much lighter note, "Asking For Flowers" also includes the mid-tempo roots pop ode to one of Edwards' favorite performers Jim Bryson on "I Make The Dough, You Get The Glory." The song has her comparing Bryson to John Fogerty and hockey legend Wayne Gretzky while comparing herself to Elvis Presley in his infamous '70s phase and hockey tough guy Marty McSorley.

So why, of all National Hockey League players, would she compare herself to Marty McSorley?