This year marks a half-century since singer and guitarist Charlie Waller and a then-teenaged banjo standout Bill Emerson formed the Country Gentlemen, a band that changed the face of bluegrass and continues today under the direction of Waller's son, Randy. 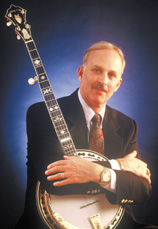 Now the sole surviving original Gent, Emerson left the band (returning for a time later) and embarked on a career that included stints with Jimmy Martin, countless guest appearances and collaborations and 20 years in military service as the cornerstone of the U.S. Navy's sterling bluegrass band, Country Current. After (mostly) retiring from the music business in the late 1990s, he returns just in time for his 70th birthday fronting his own new band and eponymous Rebel album, "Bill Emerson and the Sweet Dixie Band."

Born and raised in the Washington, D.C. area where his father owned a Buick dealership, Emerson still lives in the Virginia suburbs and speaks with a gentle drawl as he remarks that he had to be coaxed back into the business.

"Well, you know, I'd been retired for a few years, and I went out to Bean Blossom, Indiana to work with Jimmy Martin shortly before he died (in 1995). We were talking, and he was saying, 'You know, you need to get back into the music. You can get yourself a band, and you can call them the Sweet Dixie Band,' - 'Sweet Dixie' is a tune, as you know, that I wrote way back in the '60s when I used to work with Jimmy. That sort of got me to thinking, and I had been doing a little bit of recording on the side for other people."

The idea rolled around in his head until Tony Trischka invited him to appear on his "Double Bluegrass Banjo Spectacular" project along with the likes of Alison Brown - and Earl Scruggs.

"So," Emerson chuckles wryly, "the pressure was on. But Tony told me the same thing, I should be out there playing and not sitting there letting it slip away, you know. So, I decided to get some guys together, I had some ideas. I'd never done a project as a band leader, I'd always either done instrumentals or reunion-type things, and I sort of wanted to get into it as a bandleader. So, that's sort of how it came about."

Although the album has a distinct "all-star cast" character and appeal, Emerson turned to his Navy past for the core of the band. Joe Wheatley (bass), Pat White (mandolin) and Wayne Taylor (guitar) are three-quarters of the present-day Country Current lineup. (although Blue Highway also has a fine singer and songwriter named Wayne Taylor, they are not the same person).

"Wayne and Joe and Pat had done the Stelling Banjo Anthology instrumentals with me, and they're close by, and their backgrounds are real similar to mine. I spent 20 years in the Navy band, so Wayne was the first guy that I called, and he said yeah, he'd help me. So, that's kind of how it got started."

Rounding out the quintet is Con Burch, whose singing and songwriting has been a revelation to Emerson. "(She) is a remarkable talent, she can sing any kind of music - as can Wayne Taylor - and I look for her to go way beyond this CD, I look for her to do a CD of her own and be a popular artist later on down the road. I can't say enough about her attitude and her professionalism and what a quick study she is in the studio."

Emerson notes, though, that their ongoing service commitments prevent White and Wheatley from being full-time with the band, so he has hired husband-and-wife duo Wayne Lanham and Teri Chism (both formerly of Patent Pending) to replace them on mandolin and bass, respectively. Taylor has announced his retirement from the Navy effective early in 2008, and that suits Emerson just fine.

"(Wayne's) gonna be full time with me starting at the end of April when he retires...I'm not gonna start hittin' it heavy until 2008. I've got some other people lined up, plus the thing we did in Nashville, the (IBMA) Rebel showcase was almost like a variety show. We had a lot of the people that were on this project with me, and we're gonna try to maintain that concept."

That concept of adding a variety of vocal and instrumental artistry around the core band is, Emerson, right at the heart of why he decided to get back into things.

"That was the idea behind it...I wanted this thing to be as diverse as possible. A lot of times when you listen to a new project, by the time you get into the fourth or fifth tune, they all start to sound alike - it's not diverse, it's the same people over and over. I wanted it to be instrumentally and vocally as diverse as I could make it, and I think that's what we came up with." Among the most striking tracks, the Carter Family classic "Keep On The Sunny Side" is also among the oldest and most frequently recorded, but Emerson felt there was room for a new approach to it - though rather than the Carters, his inspiration was Mac Wiseman's version.

"I loved the banjo playing on it, I loved the way (Mac) did it, and when Wayne and I started planning this thing... I told Wayne I'd like him to learn the tune. Lo and behold - I was expecting him to come up with a Mac Wiseman kind of version, (but) that's Wayne's arrangement on that - he made that tune what it is. It's so different, it's such a fresh approach to it...it's different."