Steve Earle keeps moving. If it's not physically, it's musically. After 33 years living in Nashville, the outspoken, sometimes controversial singer/songwriter with the Texas twang in his voice split Nashville for the Big Apple two years ago.

"Sunset in my mirror pedal on the floor/Bound for New York City and I won't be back no more/...boys won't see me around/Goodbye Guitar Town," sings Earle on "Tennessee Blues," the lead-off song of his new disc, "Washington Square Serenade," which hit streets in late September on New West Records. 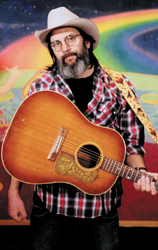 Living in New York City has had its effect on Earle, who writes and sings about it on with sounds of country, blues, bluegrass, a touch of hip hop beats and rootsy sounds.

New York City isn't exactly Nashville North, and while Earle has been skewered in the past over some of his liberal leaning songs, particularly "John Walker Blues" - he isn't afraid to make it clear where he stands on immigration and other issues - he also is willing to take a back seat for the most part politically on his new disc after hitting it hard on "Just An American Boy" and "The Revolution Starts Now" and let others carry the torch for a bit anyway.

Earle, 52, has reached a comfort level in his career, which also includes acting and writing, clearly perceiving himself as an artist who can live comfortably enough without sacrificing his core beliefs for the almighty dollar. And he even gets downright personal about being in love.

"I originally I thought this'd be a part time residence, and it didn't turn out that way," says Earle in a telephone interview from New York where he lives in a Greenwich Village apartment with his sixth wife and fellow singer Allison Moorer. "I don't know why I thought given the choice between in my downtime of hanging in Nashville...and New York City, that I would spend more time in (Nashville). It hasn't turned out that way."

"I've always spent a lot of time here," says Earle. "I've always felt very at home here...I'm a Yankees fan. I have been all my life. I didn't know you were supposed to hate Roger Maris."

"I've always loved New York. It started back four years when 'The Revolution Starts Now' was getting ready to come out. Danny Goldberg, who had Artemis Records...had been conspiring to get me to go move to New York for a long time. He and the label rented me an apartment a little further across on Bleecker from where I am now...for two months...while I was doing the press for 'The Revolution' and kicking off my Air America radio show and fucking with Republicans during the (2004) convention."

"By that time, I was pretty hooked. Then I married a girl with a job (Moorer, who he married about two years ago), and it became financially feasible. I needed to not be behind enemy lines. I needed to be able to walk outside and see a mixed race, same sex couple holding hands. It makes me comfortable as heterosexual and white as I am."

"I feel like I live in a neighborhood maybe for the first time in my life. People still sit on stoops around here...I literally live on the corner of the street where Bob Dylan is walking down the street of the (cover of) 'Freewheelin' Bob Dylan.'"

Earle certainly enjoys a reputation for owning a rebel streak. When he launched his career with "Guitar Town" in 1986, he rocked a bit with his country, scoring hits with the title and "Goodbye's All We Got Left to Say." He was the kind of person who seemingly operated outside the mainstream.

He lived in Nashville for 33 years until moving to New York, enduring many personal ups and downs including drug abuse, which landed him in jail in Tennessee.

Did Earle think he ever really fit in with the Nashville crowd?

"I feel like I fit in there back in the '70s before I was making records. There was sort of a subculture surrounding songwriters especially that were left of center who still got songs recorded by mainstream crunchy (singers). I played bass for Guy Clark. I came there by way of a circle of Townes Van Zant in Texas. We were basically folkies, and we were basically hippies, and we hung out with the bluegrass players. Probably...the common denominator was we were the people in Nashville who smoked pot."

"I was fine when I was home, but I wasn't home very much," says Earle.

Earle is palpably excited about being in New York, saying it was "absolutely everything that I thought it would be...the way I approach this is history's important to me and finding out where the body's are buried is important to me. I can give you a pretty good tour of the (Greenwich) Village as it relates to music. It's really really rich in music (and) the politics that interests me. 'Ten Days That Shook the World' was written two blocks from here. Dylan's first apartment was right up the street."