Anyone who says women can't have it all clearly has never confronted the force of nature that is Lori McKenna. She has been a devoted wife for 18 years - almost half her life - and equally doting stay-at-home mother of 5 along the way.

But somewhere in the painting of this slightly tilted Norman Rockwell portrait, McKenna also became one of the country's most gifted songwriters, beloved by a cultish fan base, championed by Faith Hill and feted by Oprah Winfrey. 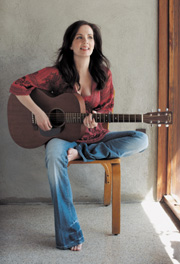 Sometimes McKenna herself has to take a deep breath and try to sort out everything that has transpired over the past couple of years, from Hill covering 3 of McKenna's songs for her 2005 album "Fireflies" to her acclaimed opening slots on the recent Tim McGraw/Faith Hill Soul2Soul 2007 Tour to the overwhelmingly positive attention being lavished on her fifth album and major label debut, "Unglamorous." McKenna's "pinch me" moments seem to come more frequently these days.

"I know, isn't it crazy?" says McKenna with a giddy laugh from her hectic home in Stoughton, Mass, a Boston suburb.

"I've never been accused of overthinking anything in my life but it's possible I may have overthought this whole process of what it's going to be like up there. And it was surprising, but I was really very comfortable. The most nerve wracking part of the process is walking up this series of staircases to get to the top of the stage, and I had convinced myself that I would fall at least once. With 19 shows, I had to get up, and I had to get down. But once we got up there and the guitars worked and the mic worked, I was just really comfortable."

In a lot of ways, it's been easier for McKenna to take the stage with her band night after in front of tens of thousands of someone else's fans than it was to face a few dozen bar patrons at her first open mic over a decade ago.

"My first open mic, I was physically shaking," says McKenna. "I have Mark Erelli and Russell Chudnofsky with me, who are my band, and Mark's a brilliant songwriter, and we've talked about it, and we've all been in situations where we've played house concerts, and those are far worse. You have 20 people sitting in someone's living room, and it can be so much harder than playing for 15,000 people who aren't your fans."

McKenna is quick to acknowledge McGraw and Hill and the openness of their fans with making her experience opening for the pair so incredibly easy.

"The thing that made it work was that the audiences were amazing," says McKenna. "They gave us 30 minutes of their time every single night, and they were so gracious. I think partly to do with they're Faith and Tim fans, and they knew that they were friends of mine, but I also think Faith and Tim made us such a big part of the show. Faith was on stage five minutes after I was off stage."

By way of comparison, McKenna notes that the night before the tour began at Omaha's Qwest Center, Gwen Stefani had played the arena, and because of set changes and other delays, audiences had to wait over half an hour between Stefani and opener Akon. Then the story takes an unexpected turn into showing just how unassuming and nonplussed Lori McKenna is about this whole situation.

"I kept calling him Acorn, but I know it's Akon, and that shows you how old I'm getting," she says with the gentlest of Boston accents and a laugh aimed squarely at herself. "My five-year-old daughter knew like five of his songs, and I'm like, 'How do you hear this stuff?' Then I kept calling him Acorn, and people were like, 'Why don't you just stop? You're making an ass out of yourself.'"

When she finishes laughing hysterically at herself, McKenna makes the point that a long gap between opener and headliner is never particularly good for the opener, and Hill was vigilant to not let that happen to McKenna.

"Literally, the longest night, Faith was on seven minutes after we were off," she says. "We were really part of the show, and that's a credit to Tim and Faith for wanting to help out their friends this summer, but also to make us part of their family and part of the show."

After her experience with the couple, you'd be hard-pressed to find a bigger McGraw/Hill fan than the one McKenna has become.

"They're both such great people," says McKenna. "I think at the point where I am, where things are starting to change and new decisions come across your table, and you're getting new fans - in the Northeast, you're used to fans but you've probably seen them before, and you might know their names - it's such a blessing to watch someone like Tim and Faith who've been down that road, then become superstars that, at the end of the day, are just great people."

If McKenna's star should rise to similar heights as her summer tour mates, it's a safe bet that she'll retain the homespun charm and devotion to family that has been reflected in her songwriting from the start, the very quality that drew Hill to her work in the first place.