Steep Canyon Rangers strike out on their own, bluegrass style

It is still a bit of a rarity to see a bluegrass band made up of players aged 20s to 30s who are committed to preserving the traditional sounds of the first generation of bluegrass founders, while still striking out for their own sound with a repertoire of predominately original songs.

"Lovin' Pretty Women," the third Rebel Records release by the Steep Canyon Rangers, shows that such a band can thrive in bluegrass. 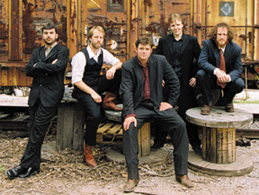 "We kind of came into it backwards as far as a traditional sense," say mandolin player Mike Guggino by phone from his home in Brevard, N. C. "We definitely didn't listen to the traditional stuff at first. That's not what got us directly into bluegrass, but as we got into being a band and playing longer and longer, it seems our tastes in what we like to listen to and sound like was beginning to get more traditional."

The Rangers originally formed around the trio of banjoist and vocalist Graham Sharp, guitarist and lead vocalist Woody Platt and bass player Charles R. Humphrey III when they and a few others began a weekly jam session while attending the University of North Carolina. Platt soon brought childhood friend Guggino into the group.

"Woody brought Charles and Graham up from Chapel Hill, up to the mountains where we live one summer right before school started, and we picked," Guggino says. "We were like 'man, let's put a band together.' I remember driving down to Chapel Hill that fall and playing our first gig at a local club there. I was driving down from Brevard and Asheville to Chapel Hill to play a lot of shows with them when the band first started."

After a few line-up changes, fiddler Nicky Sanders joined the band around three years ago to solidify the current line-up.

Although Guggino didn't grow up listening to bluegrass, it was a style of music he took to quickly.

"I listened to a lot of different kinds of music, and I still listen to a lot of different kinds of music, but I always heard bluegrass growing up in North Carolina. I always heard it, but maybe because my family wasn't into it - my parents didn't listen to it - that's not what I listened to at an early age. As I got into high school and college is really when I discovered bluegrass and just fell in love with it and kind of jumped in head first into it and started playing the mandolin."

The community aspect of bluegrass was an initial draw for Guggino as he became more involved in the music.

"I think what I liked about it was that people could just get together and just play together, jam together, pick together and have a good time, and it didn't seem like it tried to exclude people from playing," he says. "Everybody could just get together and play and have a good time, and people really liked it. It just has a certain energy about it that I just fell in love with. I just loved the sound of the mandolin, and that's why I chose to play the mandolin. I love the role that the mandolin had in the bluegrass band, and I was immediately drawn to that instrument - Bill Monroe and some of those guys - when I got into the music."

Guggino also was influenced by mandolin players such as Ronnie McCoury, Mike Compton and Doyle Lawson along with varying styles of mandolin music.

"I listen to all the different styles of mandolin and take what I like from all the different styles and put it together and do it the way I do it," he says. "Italian mandolin music has been something I've gotten in to in recent years that I'm sure has had influence on the way I play. And the mandolin players I listen to, for sure. I think it kind of creeps into our music as a whole, as a band, different influences, but yet we really try to make it a traditional bluegrass type sound, but we try to make our own sound and our own songs."

While the Rangers' original introduction to bluegrass came through more progressive groups such as New Grass Revival, Tony Rice Unit and Leftover Salmon, their commitment to the traditional sound and structure of bluegrass began as the group fell deeper in love with the originators of the genre.

Even with roots in the progressive side of the genre, don't look for any stylistic jumps from the Steep Canyon Rangers any time soon.