Eilen Jewell goes back in time

It's not "eye-lin," it's "ee-lin." And that's not the only thing a little different about Eilen Jewell.

If a listener to one of Jewell's latest songs wasn't careful, he or she might think he had put on a country or swing record from years gone by. "Letters from Sinners and Strangers," released in mid-July on the western Massachusetts label, Signature Sounds, is distinctive in its lack of studio flash and modern-day sonics. Instead, the singer just likes her voice front and center backed by spare instrumentation. 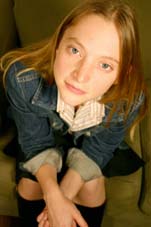 "Yeah, it's definitely intentional," she says of her music in a recent phone interview. "I just really like that style...My sense of aesthetics is just such that I can't stand a lot of clutter."

Instead, Jewell delivers straight-up tunes that might best be described as "parlor music": the sounds are so unvarnished, so immediate, that it feels as if you are sitting on the front steps of the porch while she and her combo test out one song, then another.

"I like my voice to come out in front as much as possible," she says. "Just because I feel I have the kind of voice if it's at all underneath, it sounds a little trebly or something. It has to do with the dynamics of my voice than any kind of statement of purpose, really. I also said that the lyrics are important. I like people to hear what I'm saying."

"I don't remember a time when I wasn't singing some song," she recalls. "When I was a kid, I would write songs, too." More often than not, however, she was listening to stuff that wasn't part of the poppy mainstream. Jewell has a "preference for early country music and stuff like that."

"I was always one of the stranger children in the '80s that really liked the oldies station, which at the time was like 1950s and '60s rock and roll, like 'Rock Around the Clock,'" says Jewell, who grew up in Boise, Idaho. "Most kids were more interested in listening to Paula Abdul."

During the process, she also busked in Venice Beach, Cal.

She subsequently made her way to western Massachusetts, singing at open mikes and at folk clubs, then to Boston, where she met people who would form her band, such as percussionist Jason Beek.

Jewell says she's never been much of a singer who does the obvious to please a crowd. "The truth is I just don't really know very many songs that people would want to listen to in terms of the sing-along songs that everyone knows and loves, like 'Freebird,'" she jokes.

Instead, she's more interested in burnishing music that comes from an older tradition. She likes "early Loretta Lynn and Hank Williams, all of his stuff is great...songs where you hear that the singer is really in touch with where they came from."

For her music, Jewell, who lives in the Boston area, likes to continue in the storytelling tradition, often taking on the role of an interesting character.

The narrator of "Rich Man's World," for example, knows that she's "Nothing but a lonely rambler girl" who can either make some money or catch the next boxcar down the line.

In "High Shelf Booze," she brags of being turned loose by a previous paramour, now able to drink expensive liquor and caterwaul on through the night. "Well it's one man on Sunday, another on Monday," she croons. "Two on Tuesday afternoon."

Her knack for narration in character has garnered her comparisons to like-minded tale-tellers including Lucinda Williams and Gillian Welch. "I think my role as a songwriter is to be kind of a storyteller like a narrator, and sometimes it's coming more in an omniscient voice and sometimes it's like a first-person limited, depending on when, I guess, just depending on whose story I want to tell."

Now that her album is out, Jewell says she looks forward to touring - she will be making several short trips and doing mostly east coast dates in the fall, though she also expects to take part in an interesting concert series that takes place over several days on a train. She also wants to do some touring in Europe.

A real thrill is slated to take place in September, when she opens for Loretta Lynn, letting her share a bill with a longtime inspiration. "Some day, I'd love to be compared to Loretta Lynn," says Jewell. "But I'm working up to that."