Uncle Monk puts some punk in the sound

It's a little more than a two-hour drive from the Big Apple up the New York State Thruway, into the Catskills and just past Woodstock to reach the tiny town of Phoenicia, N.Y.

It's a world away from the early '70s New York City punk scene where Tommy Erdelyi, along with friends Johnny Cummings, Douglas Colvin and Jeffrey Hyman co-founded The Ramones. Yet Erdelyi, the only surviving original member of the legendary punk group, has called this pastoral village home for the past 13 years. 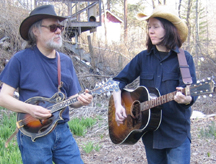 Erdelyi still goes by his band name Tommy Ramone, though he hasn't exactly settled for a quiet retirement in an artsy community in upstate New York. Instead, Ramone's music these days as half of the duo Uncle Monk reflects little Phoenicia, rising above the din of gritty New York punk and plunking itself squarely in the midst of the old timey world of folk.

But it was some three decades ago, amid the angst-ridden, multi-pierced punkers screaming out their three-chord rage, that Erdelyi, the band's first manager and producer, quickly realized his group of unknowns from Queens had something no other act - not the New York Dolls, the Stooges or even Lou Reed - could match.

Erdelyi, who worked as an engineer at the Record Plant recording studio in New York, morphed into Tommy Ramone and took over as drummer when they realized Hyman, who became Joey Ramone, couldn't keep up with the rapid-fire tunes. It was 1974, and the punk movement was in its infancy as Joey became lead singer, Cummings as Johnny Ramone played guitar and Colvin as Dee Dee Ramone was on bass.

The Ramones went on to influence an entire generation of rockers, creating a sound more polished than the Sex Pistols, yet rawer than anything on the stagnant Top 40 play list that had become submissive to a factory machine churning out overly produced vocalists, preening glam stars and self-indulgent prog rockers.

Tommy Ramone is justifiably proud of his past, but that was a long time ago, he says during a phone interview from his home. Along with longtime friend and fellow Uncle Monk member Claudia Tienan, Ramone has cultivated a mellow, thoughtful blend of folk and bluegrass, which some have begun calling bluepunk.

No doubt the "punk" in Uncle Monk is more an homage to Ramone's musical heritage than the rebellious, snarling nature of their current music. Yet he contends there are ties between the two disparate styles.

"Punk and old time music have similarities," says the native of Hungary, who grew up in middle-class Forest Hills, Queens. "You pick up an instrument and play to release emotions through music. One's loud, the other is acoustic. It's pretty simple in that respect."

Uncle Monk's debut album, out in May, is the culmination of nearly 2 decades of performing together, said Ramone, 55. The band's name is more word play than anything else, he says, adding it's also something of a tribute to musician Thelonious Monk and German painter Edvard Munch.

"We've had the name for decades," he says. "Claudia and I started out in the early '90s as a jam band. It was electric, but it was mainly stuff like (the new album) except with extended solos."

Tienan hails from Minneapolis, where she was part of the local music scene and came to New York to study philosophy at Hunter College. She was later a member of the Simplistics and joined with Ramone about two years ago.

Strange as it may sound, and considering his legacy, it wasn't Chuck Berry and Jerry Lee Lewis that enriched Ramone's early appreciation of music. Instead, he says, string bands and folk were among Ramone's earliest musical influences. His brother would bring home folk records from the library, and the pair would make tapes and listen for hours on end. Rather than mimic their predecessors, Ramone wants Uncle Monk to add something more.

"A lot of old time bands today re-create old records word for word," Ramone says. "We have a deep respect for the music. But for many groups, it's almost like a religion. There used to be a time when it was necessary, and it served a purpose to keep the music going. But there are a lot of different mediums available now."

Ramone has discovered that many bluegrass groups find imitation is a quick path to success. Experimentation is the exception, rather than the rule, he says.

"Newgrass took the music in a different direction, but then others followed," he says. "They all influence each other, then keep playing the same riffs. Then someone like Chris Thile came along, and now everyone imitates him."

Ramone says Uncle Monk's music harkens back to folk pioneers like the Carter family, Uncle Dave Macon and the Skillet Lickers. Those artists created a framework for the music that is inescapable, he notes.

"We created new lyrics," he says. Ramone wrote 8 of the self-titled album's 14 songs, Tienan penned 1 tune and the pair co-wrote the other 5. Ramone's self-written "Mr. Endicott" is actually a song that goes back several years and wasn't written specifically for the album.