The four women of Uncle Earl, a.k.a., the g'Earls, live in different states, but that hasn't stifled their musical career. 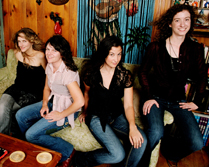 They're able to handle the geographic challenges of spreading a band across the country by planning time together. They call it an Uncle Earl retreat. But they're ready for the new six-week tour to support the CD because they recently returned from playing in Scotland and England.

Gellert, who blogs about Uncle Earl's adventures on the band's web site says, "We played a gig in London, and there were loads of people. We don't know where they all came from."

Band members gathered at the home of Washburn, the "newest" member (since 2003). They take breaks from chopping kale and preparing minestrone to talk over a speakerphone.

Andreassen says, "The people coming to our shows were more knowledgeable about old time and bluegrass music than average audiences in the States. I met a couple of people who were doing documentaries about old time music."

Although some of the songs might be the same, there is a distinct difference between bluegrass and old time music. Uncle Earl plays the latter. Groves explains, "We don't play bluegrass music. We play music that's older than bluegrass, what is called old time American string band music. And, of course, we put our own Uncle Earl twist on that. But we really aren't traditional bluegrass at all because that requires a banjo with a resonator on it played with picks, and we don't have any of those things."

Washburn adds, "And it requires musicians who like to do improvisational soloing, which isn't our really forte either."

Uncle Earl has been evolving too. Groves started the band in 1999 as a recording project, but it unexpectedly became something more. She says, "When I started making the very first Uncle Earl record, it was with my friend Jo Serrapere, and we were just going to do duets - except we needed a fiddle. We started having guests, and the first few were women, so we had to make a decision. What does it mean if it's all women? We decided to keep it all women. And when we put a band together, we just got the finest women players we could find. People kept calling us to do more shows."

Now with the current lineup of musicians and assorted guests on the new recording, Uncle Earl is a band with a clear identity. All four of the women are strong musicians who have side projects and write independently. "Waterloo, Tennessee" is a mix of traditional tunes that Uncle Earl arranged and new songs written by one or more of the women.

Andreassen says, "All of us write. We actually write a lot. We each have solo recordings that feature our own original material more so than on the Uncle Earl records. It's been an interesting growth process. Finding a way to work whatever our original songwriting style is into the band is, I think, the interesting direction where Uncle Earl is moving. Because we're all able to be very creative and original in our solo lives, then we come together and gravitate back to this traditional stuff. Trying to figure out how to incorporate our songwriting styles is definitely a place where we grew on this record."

Andreassen especially achieves the perfect balance between the new and the old. She wrote the beautiful song "Easy in the Early ('Til Sundown)." But all of the original songs are confident and accomplished, just like the musicians.

When it came time to record and choose between their favorite traditional songs and their original songs, the Uncle Earl went over the songs with their producer, John Paul Jones, otherwise known as the bassist in a group called Led Zeppelin.

Gellert explains how an all-girl, traditional string band ended up working with Jones, "I met him at MerleFest a couple of years ago. Then we ran into him again at a festival in Colorado called Rocky Grass. He was there following Chris Thile around because John's obsessed with the mandolin. We were in some sessions together. Then, we had him come and sit in with us at this bar gig. And we had so much fun with him. So we kept in touch after that. Then, when it came time to find a producer, his name came up, and we all kind of laughed about it before we realized it might be a perfect fit. I sent him a note."