The Smiths seek to "Tell Someone"

While it may seem like the relationship between gospel and bluegrass is as close as two musical styles can get, Kenny and Amanda Smith are taking that bond to a whole new level.

With the release of their new album "Tell Someone," their third on Rebel Records, the husband-and-wife duo from the little town of Meadows of Dan, tucked into the southwest corner of Virginia near Galax (which boasts the nation's longest-continuously running fiddle convention, now in its 70th year), are embarking on a new journey as well. Their strong Christian faith has been in place for a number of years, but they've never fully divulged it on record. 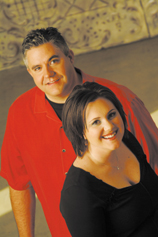 "Since we've been dating, we've wanted to record a gospel album," says Kenny, who was the guitarist in the seminal bluegrass group Lonesome River Band for six years until breaking off to pursue a solo career and then forming the group with his wife. "But something would always happen that would stop us. Last year, we finally got to record one."

Yet, like past efforts to focus on a gospel record, this one also came with its share of roadblocks. Studio time had been booked, songs were for the most part chosen, and musicians had been lined up, Kenny says, when in March 2006 they received the news that Kenny's father had tragically died in a tractor accident. The shock, of course, was tremendous, he says, and few would have blamed the couple for postponing yet again their dream project.

Instead of delaying the gospel record once again, they forged ahead. "It brought Amanda and I closer to the Lord," says Kenny, a two-time International Bluegrass Music Association Guitarist of the Year, during a phone interview while they were running errands in Galax. "It was the perfect time to do a gospel album."

It was an understandably emotional experience as well. Beyond the tragedy of losing his father, Kenny had also lost his best friend and biggest musical influence.

"My dad and my grandfather were my biggest musical influences," says Kenny, who has also taught during sessions at several bluegrass festivals, including Wintergrass in the Pacific Northwest. "They both were fiddle players. I began playing when I was four. My family's from Tennessee, and my dad knew a bunch of pickers. I'd use a tape player and record these guys, then listen over and over and try to play what they'd played. Nowadays you can get a DVD or go online to get guitar lessons. I those days I'd sit there and watch."

Not surprisingly, the songs took on a deeper meaning as the Smiths recorded them.

"The songs would minister to us," he says. "We had most of them picked out already. Amanda had been singing some of the songs for years. But they provided us with a lot of comfort at that time. I truly believe we picked these songs for a reason."

Because Amanda's mother would play gospel on her record player and on the radio, she received a unique education in the music that seldom crossed over to country or bluegrass. Gospel quartets rarely were accompanied by musicians, relying on their vocals and harmonies instead.

The album is a unique blending of gospel quartets and bluegrass that's never really been heard before, Kenny notes.

"The southern gospel groups, like the Inspirations and The Kingsmen, had no band," Kenny says. "They were quartets. This is an acoustic version of that style. It's our own arrangement. This is new to bluegrass people."

So new, in fact, that Rebel is releasing two songs for airplay - one for the bluegrass market, the other for gospel.

" 'Shoutin' Time' is radically different from the original version," Kenny says. "The kickoff and the arrangement both are different. With the kickoff, we were just kind of fooling around in the studio, and everyone just fell into it. (Producer/engineer) Glen Tabor III had the record button on and got it all. Glen said, 'That's it!' It was one of those special moments."

The song, which was written by Luther Presley and kicks off "Tell Someone," also features bluegrass songstress Rhonda Vincent as a guest vocalist. Since Amanda began singing professionally, she's developed a strong bond with the IBMA's multi-award winning bluegrass songstress. Amanda decided to approach her to perform on the song.

Most of the work was done through very nontraditional styles of recording - FedEx and e-mail, Amanda says. Though Vincent didn't attend the sessions - she recorded at her home studio in Hendersonville, Tenn. - the harmonies mesh beautifully, and her solo verse is distinctly Vincent.

Amanda says she's honored to have Vincent perform on the record. "What I really like about her singing is that she doesn't overdo it." Amanda says. "Like Alison (Krauss), they don't add unnecessary notes or color a song too much. She's just genuinely good, and I respect her for that."