Just as soon as it seemed to start between Taylor Swift and One Direction's Harry Styles, it maybe over. Yet again, Swift's love life is all over the internet.

Now the question is whether Haylor as they have become known are together or if you believe the majority of what's out there, broken up after a scant two months. 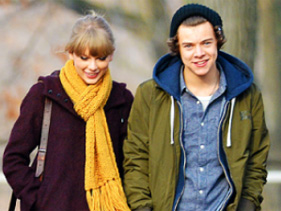 That would have included, of course, a big smooch on New Year's Eve in New Year's Eve and a getaway to the British Virgin Islands where they just may have had a big fat spat and then broke up.

Who knows? Who cares really? It's not like inquiring minds particularly want to know, although not quite sure I get the idea of Swift hanging with teens - at least when it comes to the last two guys she dated.

For better and definitely worse, Swift apparently just destined to be the subject of the gossip mongerers out there as she has for several years. Ah, the price of fame and glory.