A very rocky road to the CMAs

The CMA Awards has had a rocky road to say the least this year, and it is continuing until the end – that's even before the show starts. And some of it is the association's own doing.

COVID set the stage for a different kind of show. There was nothing that the CMAs could do about that, of course. And the move to a small venue in Nashville made sense given that's where most the country crowd is based.

Things started going south last week when the CMA advertised the awards show as a "no drama zone." The CMA promoted the show s as "NO DRAMA, JUST MUSIC." An advertisement also said, "It's been a year, y'all. But for three hours next Wednesday on ABC, this is a non drama zone. More than 20 one-of-a-kind performances will help you forget the weight of the world for just a little while." 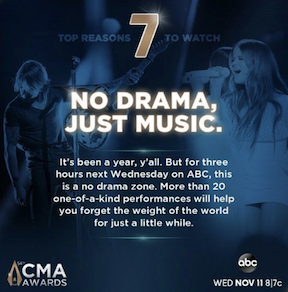 Not sure what universe the CMA folks were living on, but there has been a tremendous amount of stress this year as well about the election and racial issues, and to suggest that we should forget about them as well was near-sighted and utterly tone deaf.

While artists can obviously choose not to speak out on issues, they should not be muzzled either. (this is not the first time the CMAs have tried to do this. They did so after the Las Vegas shootings in telling reporters not to ask about it, but that melted away thanks to protests from host Brad Paisley and others).

By last Thursday, the CMA sang a different tune. ""While our intentions with our social campaign was to communicate to our fans that the show will offer a brief escape, we recognize that our phrasing did not convey that message. We welcome every artist's right to express themselves."

As they should. Thanks for folks like Maren Morris making her voice heard this year on everything from BLM to the election, instead of taking the easy route.

And today resulted in Associated Press pulling out of coverage of the CMAs completely over freedom of press and access issues.

The AP wrote, "due to restrictions that have been placed on still photographers and screen captures of the broadcast."

"The wire service has refused to accept limitations that organizers of the show have placed on images from the venue that it believes affects its ability to accurately report on the event. The restrictions prevent AP from providing coverage of the ceremony "to its standards," according to an advisory it sent to members. The AP will not write about, take images of or shoot video of the show."

"Organizers had initially sought AP photo coverage from inside the ceremony, but said that due to coronavirus precautions it could not accommodate a wire service photographer."

"The association instead said the AP could pay to license images of the show. The AP declined."

The AP wanted to be able to take screenshots, but the CMA was not satisfied, according to the AP story. "The CMA instead said it would only grant AP permission if it agreed to not move screenshots from the broadcast that included the faces of guests seated in the audience," the story said.

""The AP covers award shows as news events and we must be able to assure the public that the information they are receiving from us is accurate," said Global Entertainment and Lifestyles Editor Anthony McCartney. "By denying independent news organizations, including AP, access to take images of a publicly broadcast event, the CMA Awards is infringing upon the news media's ability to tell the full story of the event."

No word from the CMA in response.

But yet another mistake by the CMA. Who are they trying to protect by not allowing shots of guests? And clearly, this infringes on freedom of the press to provide coverage of the event.

Yes, it has not been a very good year, and the CMA did not help regarding "country's biggest night."