David Bowie was a musical icon in genre-bending career that lasted five decades until his surprising death last Sunday at 69. Bowie did not have any connection to country music, but maybe his choices could be a guide to country, bluegrass and Americana artists today. 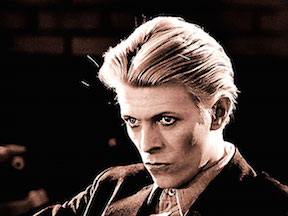 I listened to a rebroadcast of an NPR piece that Bowie recorded with Terri Gross on "Fresh Air."

During the interview, Bowie readily acknowledged his dislike of country. When Gross asked him what he listened to growing up, Bowie said, "I think the only music I didn't listen to was country and western, and that holds to this day. It's much easier for me to say that, the kind of music I didn't listen to was pretty much that. I mean everything, from jazz to classical to popular. And Tibetan horns were a great part of it in 1966, '67."

Yet, I think Bowie's musical life could provide inspiration for those playing country, bluegrass and Americana music.

All too often, artists could be accurately accused of not following their musical muse, but, instead, of going with what happened to be popular at the time to try to advance or even have a musical career.

I always wondered, for example, if Sara Evans was guilty of that. Her first album, "Three Chords and the Truth" says it all title wise. It was a traditional country disc, didn't do very well on the commercial front, and she changed styles drastically. Of course, she also has been able to forge a commercially successful career.

Bowie was generally one who did what he wanted to do musically, going through a bunch of phases from glam rock to electronic music to harder-edged rock sound to dance music to jazzy overtones on his coda, "Blackstar," released only two days before his death.

Except for perhaps his dance phase ("Let's Dance" was, of course, a huge hit for Bowie), Bowie went where his musical instincts took him. He did not seem like a poseur, but someone genuinely interested in the genre and exploring it before putting out generally worthy albums.

Few country acts seem to go outside of their bread-and-butter and explore. Garth Brooks did, but he decided he had to adopt an alter ego, Chris Gaines, and go rock. The album wasn't all that good, and that was about the last we heard of Gaines. Taylor Swift did, of course, go way beyond her country roots (which were really clearly on the pop side of country) in launching her current mega, uber success, "1989." Swift made it crystal clear this was not a country album - it's not - and she has seen her career and star status mushroom even further.

With the country field, Alan Jackson may one of the best example of going outside his tried and true traditional country sound in recording several spiritual albums along with "The Bluegrass Album," which proved to be very successful. It should also be noted that Jackson once had a single "Gone Country," poking a lot of deserved fun for those who came to country because it was gaining in popularity, but had no real love or interest in country. The latest rocker to enter the country fray is Steven Tyler, the lead singer of Aerosmith. Tyler is a legit music fan of rock, blues and yes, country. Aerosmith, in fact, once recorded a song with Willie Nelson. The late country star Conway Twitty came to country via a career in rock.

Dierks Bentley went bluegrassy with "Up on the Ridge," although he recorded bluegrass songs on other albums. Brad Paisley has put religious songs on his albums along with instrumentals.

One has to have a lot of respect for an artist willing to go beyond their comfort zone - as long as the interest is legit - and trying something new and different. It was no surprise that Swift, for example, went well full throttle with a pop album. Swift did what she wanted to do. She also had the power to call her own career shots given her previous success.

Trying to do something different takes guts. Will your fans stay with you? Can you gain new converts?

What has happened more so in country in recent years is that the genre has expanded further and further where pop and rap are part what apparently constitutes country music. That's not what I'm talking about though. The expansion may be more a case of the musical business powers that be trying to fit country within a niche that will sell. Perhaps that's why Sam Hunt is considered country even if he himself has questioned his country connection.

Instead, the legacy of Bowie is one of encouraging artists to be Artists - take the craft seriously, consider delving into other genres and explore - and maybe the musical world will be better off.